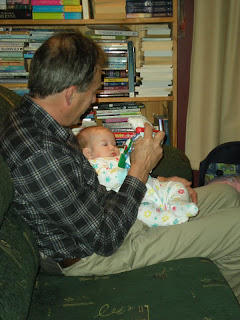 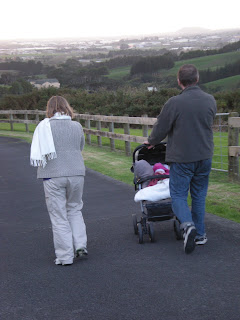 On a walk with Nana & Daddy 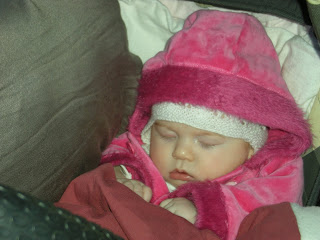 All tuckered out after her walk...
That's it from me,
Elizabeth
Button Going Out PND

Linda said…
Thanks for stopping by my blog. It was a pleasure to come here and read your blog. Your baby is precious. I remember those days. It's good that you have classes, that should be helpful in reassuring you. Try and take care of yourself and get some support. Mommy needs her rest too. Linda
22 August 2010 at 07:23

soonarmy said…
Hey Elizabeth,
I so get how scary it is driving on your own with the baby in the backseat! We got a mirror after I did a drive with Munchkin crying in the back and me not knowing what was going on...I felt worried when he stopped crying (but thankfully he'd only fallen asleep but hey, how are you sposed to know that when you can't see a thing?!?!)...so now I have a mirror so I can at least tell if he's got his eyes open or closed. ;op Hope you have a great trip down. I'm praying you do!
27 August 2010 at 08:40