August 13, 2010
Friday 13th August 2010
In case you're wondering - the reason I always start with the date is because here in New Zealand the time difference is quite substantial to what the blog shows... learnt to do this when I was using xanga, far less confusing for me (even if it confuses everyone else *grin*)!
I just thought I'd introduce you to the other part of our family - I mentioned in the introduction that we have a cat called Pixel...  well here she is: 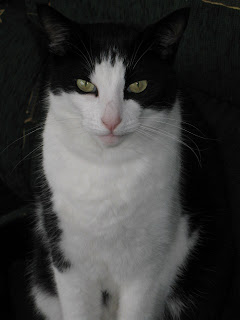 Yesterday after I had put Button down for her first sleep I discovered the cat outside her bedroom door waiting for me... this normally means 'trouble', and yesterday was no exception! She raced me down the stairs, trying to trip me up (I swear), she then chased me in and out of the house as I collected the firewood for the day! This is from a cat who is generally very gentle and quiet; but every now and then she turns into this 'Crazy Cat' and you get this blur of black and white zipping in and out of every corner of the house. She especially loves the living area as we have tiles, and she has learnt to skid on them, FUNNY!!!! The other morning she found a piece of dry pasta on the floor from the night before, and was hitting it and chasing it across the tiles - she has been known to stop to late and thump into the couch, or the french doors!
She is quite the personality, and is a 'Daddy's Girl'; has always (and probably will always) have a soft spot for him, and prefers him over me - I'm only good enough when he isn't around! I think the other morning was all about attention, she basically gets nothing from me these days, and limited attention (to what she used to get anyway) from Mr. C - although he still makes an effort with her! Since we have moved into the current place she has discovered the 'hunting gene', and I don't know how many times we have woken to her having brought in a mouse or bird in the middle of the night - gggrrrrrr; never really had this problem at the previous place! 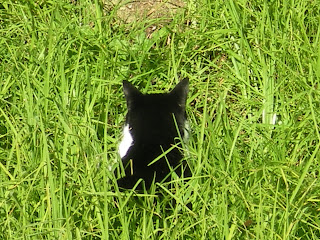 Hiding in the long grass waiting to pounce!
There is also an old gorgeous Golden Retriever here called Charlie that our friends inherited: 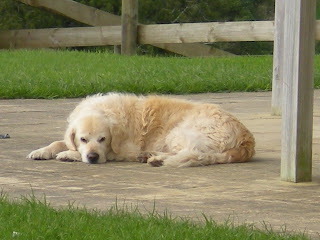 I don't know what it is about this place, but it seems to bring the insanity out in the animals! Charlie is mad, just plain mad - gorgeous, but mad! He would lick a person to death; however he goes stark raving mad over birds / cows / planes - basically anything that moves which is not human! He is a dag, but a LOUD one... most of the time I shake my head at his antics and think 'Silly ole' Charlie Dog' (I'm sure this will be one of Buttons first sentences), other times he is barking so loud and long that I am thinking (if not yelling) 'Shut up Charlie'!!!!
For example - the other day he was sitting on the patio in front of the neighbours house (where he lives) just quietly resting (read, sleeping) when all of a sudden he leapt up and sprinted past our place and up around the corner at the top of the property and just started barking. There was NOTHING there, and even if there had been - he could not have seen it from where he was... he was just running and barking for the sake of it! He then eventually turned and started heading back home, part way there he stopped, turned back towards the corner of the property and barked again - like he was warning this 'thing' not to come back, whatever it may have been!  He does this quite regularly; although sometimes he does seem to focus on a plane or a bird; so now and then there is a 'reason' for this strange behaviour! But he really is a sweet ole' thing!
There is also a cow that lives here called 'Lottie Moo'... she is grumpy and old, and you stay out of her way! She has tantrums - seriously, she sits in her paddock and for hours will bellow (there is no other way of describing it). The first time I heard her I thought she was in serious pain, but apparently not - it's just her... she is a grumpy old thing prone to two year old tantrums! Very funny, but loud - thankfully she is the other side of the property from us, so we don't have to listen to her bellowing for hours on end (nonstop) unless we happen to be visiting next door, or are out walking!
We also share the property (and the LONG driveway) with loads of other fauna and flora - remembering the house we're renting shares 5 acres of land with our neighbours. There are possums, fantails, kingfishers, wood pigeons, plovers (of the Australian origin), quail, pheasants mice and many other things! Up the driveway are two pigs - we have nicknamed them Bacon & Sausages, there are also some cattle and guinea hens all belonging to the same house! We share our almost 1 kilometre loooooong driveway with 5 other houses...
So they are our crazy animals (thankfully only one belongs to us though)... promised you it wouldn't be all about Button!
Elizabeth
Animals Home