Lists and all things organised...

August 12, 2010
Thursday 12 August 2010
I LOVE LISTS... I admit it, I'm a bit of a control freak; not totally - but enough of one that I like to be organised and sorted, on time and know where I stand (or what comes next)! I suspect that is why I have struggled so much with Button; she has her own mind and doesn't appreciate being organised and sorted out thank you very much! I know I need to lighten up a bit... BUT, how does one get anything done without lists!
Here's my 'To-Do' list for today (more things have been added since this photo was taken): 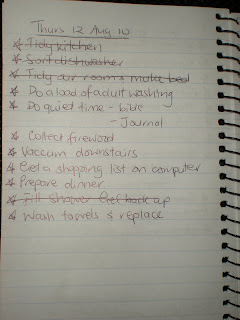 Seriously - Mr. C jokes with me that I probably have a list somewhere with all my lists listed, so I know what is on them all and where to find them... I don't, just in case you're wondering! But I start my day off with a list; it keeps me focused and on track - it makes sure I do everything I set myself to do, if I don't half the stuff will be forgotten - partly because my brain is like mush at the moment, and partly because I will get side-tracked on the computer!
When Button was first born my lists consisted of things like - shower, getting dressed, making the bed, having breakfast... if I got all that done before lunch I felt I had accomplished something, and it also gave me things to cross off! There is nothing like the feeling of crossing things off your list; fantastic!
This little obsession works its way into cupboards as well - I like my cupboards to be organised and tidy, everything has its place and is 'just so' (I will often go into the pantry after Mr. C has put the shopping away, and tidy it up a bit - shhhh, don't tell him)! I have photos of my cupboards in every house (oh, I am obsessed with photos also); whenever we move I go around and take photos of every room when we have unpacked - including the cupboards! I never really noticed myself doing this, or thought it odd until I had friends tease me, they were watching a slide show of  my photos (on random) one day and there were 3-4 photos of different cupboards come up one after the other... they thought it was hilarious! I don't think even Mr. C was aware of this strange obsession, he doesn't really take any notice of the photos I take ;-)!
One way that lists work to my benefit though - is the 'Hubby Please Do...' list, see he doesn't like me nagging (like most males), so I have taken to writing up a list of jobs he needs to do around here; now when he completes one he tells me to cross it off ;-)! What I need to do is transfer it over to the computer, and put it in order of priority - and maybe a time frame?!? Not sure whether that will work, but can only try!!!!!
Another list I am going to have to get started on - is a list of big ticket items to save up for... we both see things slightly differently, and tend to prioritise them differently! I want some outdoor furniture (we're hosting the family Christmas this year), but he wants an IPad - he thinks he can convince me we can have one by promising to buy it for ME for Christmas... but I know who'll be playing with it first!  We also need a new pram, the washing machine is slowly dying, the Entertainment Centre (TV computer) has died and so the list goes on!
I am also meant to be writing up and sorting out a budget for us - not my favourite thing to do though, had a good one working at the last place, but then we moved and the rent changed; Mr. C got a small pay-rise and our HP will be finished at the end of the month... so it's time I got my act together and sorted out another one. You'd think, with having worked in accounts, and liking to be organised and in control, that this is an area I'd excel in - hmmm, doesn't work like that! But it's going to have to soon though, otherwise we'll get ourselves into trouble one day!
Anyway - that is my insight for today...
Elizabeth
Lists Priorities

MaxineD said…
You and your lists! As long as they work for you, keep them up.

Aynsley said…
At work I have a diary dedicated to my daily lists - a "to do" list per day!. This means that they are all kept in one place and I can go back through them to see what I was working on on a particular day if need be. I love lists!
13 August 2010 at 09:02

soonarmy said…
hehe, I am so with you, Elizabeth! Lists are great, especially for helping create a feeling of accomplishment when all you've really done is the basic survival stuff. I love lists. I have an A4 book beside my computer which has each week of study, with each paper listed. Each week I write what needs to be done in each paper. Plus I have some pages just for all my other lists (of course!); August has things like "sort our books out"...don't know that we will get to that this month, maybe next?!?
Amy
13 August 2010 at 10:41