The Multiple Uses of Towels

October 23, 2010
The Multiple Uses of Towels
Saturday 23rd October 2010
Well - just in case you thought towels have only one purpose in life, let me tell you otherwise...
Button's room is on the side of the house where the sun goes down (east, west, north, south - I was never very good at geography), basically she gets full-on sun from 3pm onwards and with cream curtains it is BRIGHT in her little world! Up until daylight savings we could just shut her curtains and all would be well, day time and night time... but now it's a different story, as 7pm is still like day in there and not very good conditions to entice her to sleep all night!
Mr. C and I have been discussing getting some black-out curtains, or at least some dark thermo-lined ones for her room; so when Mum was up recently we popped down to The Warehouse and priced curtains for her room - her windows are huge, and then there is also a set of french doors that lead onto a balcony (it is meant to be the Master Bedroom)... However, Mum did a basic measurement and we found some curtains that would fit both, then checked them on the 'Price Indicator' thing as neither had prices showing (and now I know why) and it was going to cost us $270 to curtain her bedroom just from The Warehouse, NOTHING fancy at all!
So I dutifully rang Mr. C at work, as an expense of that size is not bought without consultation, and got the response I had expected 'No way, we're trying to reduce our credit card debt...' (I'll leave the rest of the conversation to your imagination *grin*)! I was gutted, as it's me that has to deal with trying to get the wee girl down for a nap/sleep, and is the one dealing with the grumpy kid if she doesn't get rest. At that stage we had a black and red blanket hanging up over them; but that just wasn't doing the trick.
So the curtains got put back on the shelves, and we continued wondering (Button was asleep in the front pack, so we had to keep moving until she woke up - my philosophy is 'Never wake a sleeping baby', especially one who sleeps as little as mine). We popped into Farmers who were having a sale and Mum had a brainwave...
We came out of there with two HUGE bath towels (or bath sheets as they were advertised as) in charcoal, worth $50 each but were on a half price sale (I would never spend $50 on ONE towel, what extravagance)! So now my baby's room has got two HUGE dark towels over the worst offending windows... seems such a shame to block out the sun, especially when we have been yearning for it all winter - but sometimes it just the way of it! 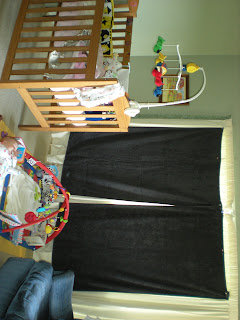 Grrr - does anyone know why Blogger does this every now and then? I can't seem to turn this photo round the right way :-(...
Sorry - you'll have to turn your head sideways to get any real idea ;-)!
Mr. C came home a little repentant at his reaction and promised he'd think of something, so was stoked to see the towels (Mum and Dad bought them for us as early Christmas presents - and if I remember right, they gave us towels last Christmas also *grin*)! However, he said that over summer sometime (which means over his holidays) we'll go looking in Spotlight and see if we can buy some curtaining material and thermal lining cheaper, and ask his Mum to sew up some curtains for us (if you read this Noelene - PLEASE, I'm begging you). I am not sure if we will be able to get it much cheaper to make it worth the while, but only time will tell (it might mean going back to The Warehouse if that is the case...).
I really struggle with it, as I want my girls room to look nice... as it is we haven't been able to buy draws for her yet, so her clothes are in a bookshelf cube thing, and now to have towels over the curtains *sigh*! But she doesn't know any different yet, and hopefully by the time she does we'll have been able to afford to get her bedroom looking nice! 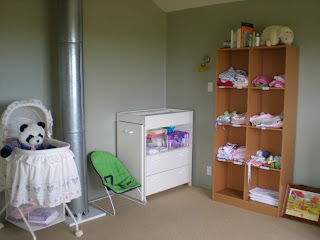 This was taken before she was born - the room looks a little more 'lived in' now!
The idea being, that when we get draws the cubes will go down sideways somewhere in her room (not sure where they'll fit yet, we may need to do a rearrange) and be used as toy & book storage... or maybe we'll bring them downstairs, and swap them with her toybox and take that upstairs (my old Glory Box - sob, sob; one day I'll reclaim it)! I am sure that by the time we have got through Christmas and her first birthday she'll have more than enough toys and books to be spread between both rooms! Currently there is enough for the lounge, but as she doesn't move yet - that works fine for us!
Anyway - that's it for towel usage for now... any other idea's, please feel free to comment ;-)!
Elizabeth
Curtains Extended Family Family Home

Aynsley said…
I think I might have some block out lining (ie triple thickness with the black in the middle)scraps from the curtains I made for our house in Chch. Let me have a rummage and I'll see what I can find to send you. Our friends were in a similar situation and used to peg block out lining over their drapes with a normal clothes peg so it was easily removed. Also if you do end up buying curtains don't rely on thermal lining to block the light out because it doesn't (lesson hard learnt!)... light coloured drapes still let in all the light. Spotlight often have left over rolls of the really good blockout lining for $7-10/m
23 October 2010 at 17:56

Amy said…
Do you have anything on the cot itself? We have 'sewn' some fabric on one side, just partway along, on Munchkin's cot - more to stop him peering out than anything else, but I find that with the side on the cot up during the day, that is enough to help him sleep...without it I'd have to close curtains as the light would shine directly in his face.
Your storage cubes look cool! Munchkin's clothes are in plastic containers, currently on the floor in the wardrobe in his new room. No room anywhere else for them. ;op
Amy
24 October 2010 at 16:51