Growing up SO fast...

My baby is growing up SO quickly... she really is no longer a baby, rather a little girl with likes and dislikes all of her own:
LIKES the cat, Daddy, baths, Baby Einstein DVD's, and eating!
DISLIKES her medication, going to bed, being made to cuddle people she doesn't know, and loud noises!
There are plenty of other things she either gives a gorgeous smile to, or screws up her nose and lets out a squawk at - but I think I have managed to paraphrase the main things in her life right now!
There has been loads of 'little' milestones happening at the moment - the main one being her ability to sit up on her own unassisted as this photo shows: 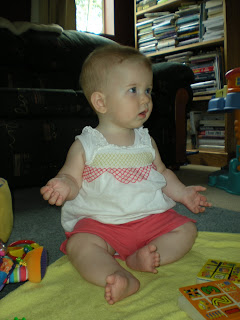 This was the first time she had done this, and she managed an entire 15 minutes (more than enough time for this besotted Mummy to take photos and a short video, hehehe) before she toppled down! And since then there has been no looking back...
She also started clapping intentionally yesterday, of course she wouldn't do it for Daddy... however, she did show him she could sit up when he got home. Turns out she was saving the clapping for today, wanted to 'share the milestones' around a bit, and showed off her new skills when he got home this afternoon (having not done it all day *grin*)... so Mummy managed to get a short video of it as well; yeah!!!!
She has also discovered she can move around her cot - it has taken until now for her to suss this out; generally where you left her would be where she'd stay... now she could be anywhere and I have had to do a few rescue missions! Earlier today she had turned herself 180 degrees, was face down and had managed to half crawl under her blankets (which were turned down at the end of her cot). It was hilarious, and so I decided next time I'd take a photo (poor child), as I figured if I had to rescue her then she'd just have to wait for a photo! So here is a photo from one of her later sleeps today (not as funny - but still shows you just how much she is moving now): 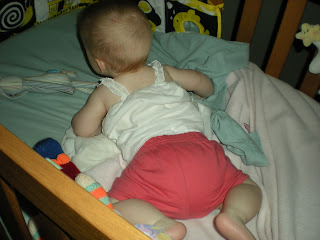 Ok - so her head is up the right way, and it looks like all she has done is roll onto her tummy and slithered down a little onto her blankets... but don't be deceived! If you look closely on her left hand side you'll see a multi-coloured toy half hidden - this dear friends is a knitted clown that my Aunt sent us at her birth; it's whole life has been spent at the END of her cot sitting with a big teddy bear, I wasn't even aware she had noticed it. This means she has managed to get right down the end of her cot, pick up the clown and turn around and get half way back up again before 'calling' me to rescue her (I had wondered what she had been up to with all the funny noises over the monitor). I think we have a little 'mover and shaker' on our hands, and I suspect she'll be keeping us on our toes her entire life...
So these are the main milestones, but there are still plenty of other smaller ones (ate meat for the first time tonight, copes better with people, is recognising people we see regularly out of context - e.g. she recognised our neighbour Laura down at Coffee n Kids today, she's waving regularly and she is now doing what I call 'The Caterpillar Creep' - going backwards when on her tummy).
Anyway - enough rambling on about how amazing our daughter is... time for sleep!
Goodnight everyone,
Elizabeth
Button Milestones Parenting