December 28, 2010
Tuesday 28th December 2010
Well - we survived the first Christmas with our wee girl... it didn't go to plan, but it was memorable (shall we say *grin*)!!!!
Having woken at 7:30am on Christmas Eve, we weren't expecting the 6am wake-up call we got on Christmas Day - not a good start to our morning (I wasn't expecting that for a few years yet either *grin*)! Our poor girl was still struggling with the cold she'd come down with a week earlier (her worst by far) and I had also succumbed earlier in the week, and was feeling rather worse for wear as well. So we had a grumpy, and 'I am NOT going to sleep' morning from her - frustrating! Tried putting her down a couple of times, but gave up and decided she could 'open her stocking' instead: 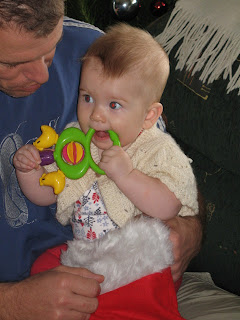 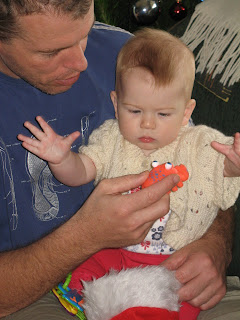 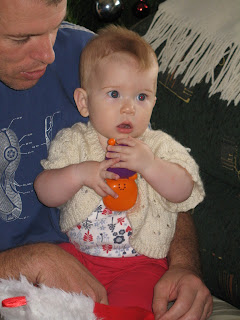 That was FUN, everything was taste-tested first; and as soon as the next toy was taken out of the stocking - the previous one was discarded... how to overwhelm a small child! We didn't wrap anything in the stocking, figured she could just put her hand in and pull out whatever she found - was all just cheap toys (a few small bath toys, some teething toys, a plastic mobile phone as she loves our ones, a ball and probably some other odds and ends I have forgotten now).
She then fell asleep after her next feed, so Mum, Dad and I took off to church as our homegroup took it... I was meant to be on the Benediction, but had arranged for someone else to do it due to Button and I feeling sick - just wasn't sure if we'd make it or not. Button stayed home with Daddy, but only managed a 30 minute sleep.
We got home to discover Mr.C's family were going to be late, so we proceeded to open my family gifts under the tree: 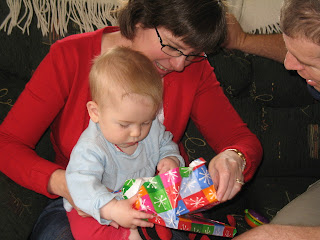 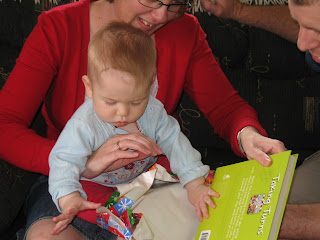 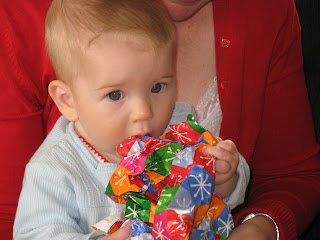 Finally people started arriving, and the tables were sorted and food started appearing - however, our 'American themed' Christmas wasn't going to plan with the turkey being over-cooked due to the vegetables going into the oven late, so it was dry and not entirely salvageable... we also forgot to get the YUMMY pumpkin pie out for dessert that Mum made (so had to eat it later by ourselves; such a tough job, but someone had to do it). So other than a few of us wearing the 'Red/Blue/White' clothes, it really was a bit of a fizzer ! Never mind - there is always another year!
Still - the presents went down a treat; not just for Button, but for her cousin who is just over 12 months older than her and has a better understanding of what presents are all about!!!! 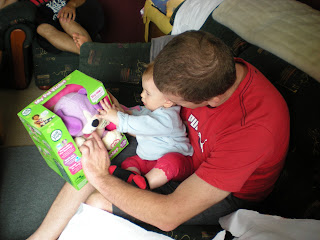 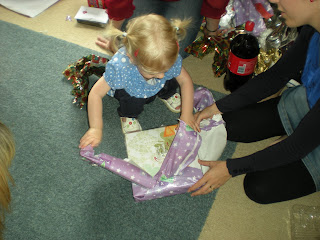 Sienna helping Mum with her present!
Button did manage another two sleeps through-out the day, although the second one was also only 30 minutes and the third one was 45 minutes (these being totally normal at the moment due to her cold and teething). So she was grumpy and clingy all day, as there were so many people she doesn't see often, and so much noise and just to much going on; only wanted me or Mr. C all day.
By the time everyone left - we were exhausted, and I was pleased it was over - I had no idea that Christmas with a little one is just so different!!!! However, I am sure it'll get easier and much more fun as she gets older - and I am SO looking forward to that!
Once the house quietened down, she became more settled, and as you can see by these pictures - she relaxed and had some fun with Dad, she is such a Daddy's girl: 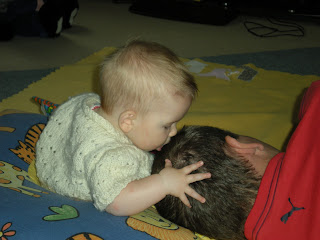 Kissing all the tiredness away... 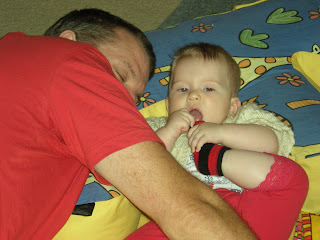 Just chillin' with Dad
The 'Goodnight Kiss' became a bit of a game as the next few photos show: 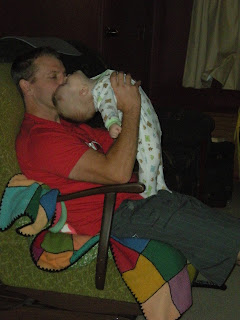 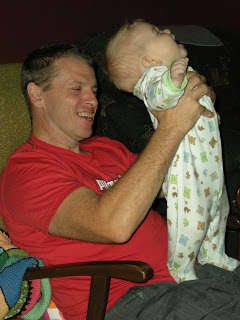 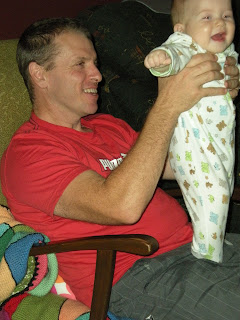 Just too cute... moments like that make up for the grumpy day, and the disappointments when things didn't go according to plan! Maybe one day I'll learn to relax and 'go with the flow'!!!!!
Elizabeth
Button Christmas Extended Family Family Sleep Unwell

MaxineD said…
Yup - going with the flow is the only way - and under planning, rather than lots of details which can go wrong. KIS - keep it simple was my motto!
Great day though :-)
Blessings
M
29 December 2010 at 15:22