December 04, 2010
Saturday 4th December 2010
My baby is being a super angel at the moment... unfortunately not at this precise moment itself (she is upstairs in her cot 'going to sleep' by chatting and grizzling - but I am sure it won't be long until she crashes; well I am hopeful anyway *grin*)! 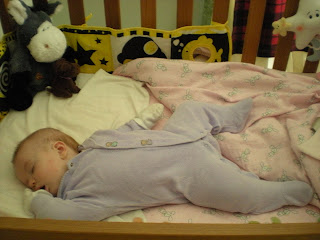 MaxineD said…
Well done - and I am sure next time will be different as it will be a different child ;-).
Enjoy the party.

Jenn said…
Just so you know, you wouldn't have "spoiled" her by continuing to answer her cries.

I have a 18mth old, unspoiled, bub who struggled with reflux and terrible sleep for the first 12mths, and especially when dealing with new medication/dosages etc I never felt comfortable leaving her. 10min is a VERY long time when you don't understand object permanence.

So I never did. And she now "self settles" very well, having had no crying sessions. In my opinion self settling is a developmental thing and will happen naturally if you let it.

But I understand the need to do whats right for your family, and I also understand how hard it is to ignore societal pressure (I've been ignoring it for 18mths now). Enjoy the sleep you're getting!

I guess I just wrote this to be the one voice among all the others who say "leave the baby to cry!". Not to condemn you or anything. Just to point out its not the only way.
4 December 2010 at 14:41