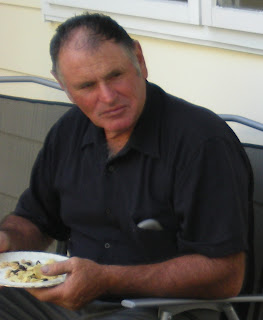 Photo taken by me at my Dad's 70th in March 2010
(Couldn't upload the photo the paper used)
A farmer has been killed in a quad bike crash on his sheep, beef and stud farm near Wairoa, in the northern Hawkes Bay.
Kevin David Knauf died when his quad bike rolled 40m down a steep bank on his 2000ha station Tangiwai on Monday afternoon.
It is understood the 59-year-old had been working stock by himself when the accident happened. It was only when he failed to return home that night that a relative went to look for him and discovered the crash.
The Lowe Corporation Rescue Helicopter arrived too late to help him.
Jon Knauf last night described his father as a much loved husband, father and father-in-law of four and grandfather of seven.
Alastair Milne told the Herald he met Mr Knauf through business and they became close friends.
"He was a self-made man, if you like, who worked his way up from nothing. He always had a dream to own his own station and he did the hard yards."
Mr Milne said Mr Knauf started out as a share milker and realised his dream of owning a station through "good honest toil".
Mr Knauf won King Country farmer of the year in 1985 and was a well-respected farmer who set goals for himself and achieved them.
"It seems strange that Kevin is gone. He was a bit like a totara tree - he was a strong character, both physically and mentally," said Mr Milne...
This is not just another face, not just another statistic - not just another story.
This man is my best friend's Father, he is a man I have known since I was four years old... he is a man who is intricately entwined in my history, and in my life. I have spent many hours in their house, part of their lives; to the point it became a family joke that during the school holidays I became Elizabeth Knauf  (you can even read this in my parents 'Visitors Book')!
I have watched him work hard, love his family, teach them to have a deep and abiding love for God, and build their treasures in heaven. I have seen him adore his Grandchildren, and teach them the lessons about life he had taught their parents before them. He has a very special bond with my best friends girls - they adore their Poppa, and love visiting him and Nana on the farm every single school holidays.
He has built their farm up from what it was when they bought it - to what it is today, the biggest stud in New Zealand. It has all been done through hard work and sweat... I have seen him give folks a second chance, people that others wouldn't look at twice.
To see him in black and white, in one dimension - it doesn't do him justice, this is not Kevin... this is not the man I know. Even my description above just doesn't ring true in my heart, how do you describe a man you've known all your life? A man, whom you probably don't know well at all - I remember him from a child's perspective, I never got to know him as an adult properly... he is Sarah's Dad. But despite that; I hold him, always have, in high regard.
I missed his funeral; I missed saying goodbye - one of the hardest decisions I have ever had to make, and probably one I will second-guess the rest of my life. Wairoa is a good 6-7 hour drive away from Auckland, I am still breast-feeding and there is no way Button would cope with a trip that distance - we had to stop just going from Auckland to Hamilton (1.5 hours in the car) the other day, as she was screaming. She is not a car kid, although we're hoping she'll get better as she gets older. We looked up flights - $500 return p/person, plus it would have required a three night stay down there, as so many of the flights there and back were totally booked up already.
I stopped at 1pm yesterday (when his funeral was due to start) and spent ten minutes praying and thinking of Kevin and the family... but we had guests for lunch (at my hubby's invitation), so I never got to do as much as I would have liked to. I had hoped to have written this post by then, and have put it up on my blog bang on 1pm - my show of respect and love to him and his family.
I wish I could have been there... I wish I could have said goodbye... I wish I could have held my friend and let her cry... I wish. God knows, He knows how desperately I tried - but that doesn't make me feel better right now.
Maybe one day I'll accept that this is how it had to be; but right now I just want to be with my friend and help her through the hardest days of her life.
Elizabeth
Kevin Knauf

MaxineD said…
Oh Sweetie - I feel your pain!! I passed on your hugs and best wishes and the bits you emailed me

Amy said…
Hey Elizabeth,
The hardest thing sometimes is that we can't be there, when we want to so much. But remember, Sarah will need you not just today or this week. You are her friend forever and she will probably need you most when others have moved on with life. Perhaps then would be time for another 'girls weekend?' You have been in my thoughts and prayers, as have Kevin's family. This is a lovely tribute, Elizabeth.
Amy
12 January 2011 at 19:59