January 13, 2011
Thursday 13th January 2011
We took our first trip to the zoo this past Monday, but came to the conclusion that Button really is still too young to appreciate it... I had thought that personally, but she does have an extreme fascination with the animals around our place (of which there are many), and Mr. C was SO excited to be able to take her these holidays - that I figured it wouldn't hurt, and maybe we'd have a nice family outing!
Oh yeah right, I forgot that it is MY daughter we're talking about here... the child who 'just knows' instinctively when we are trying to go out, and just doesn't sleep, or doesn't behave - just doesn't do anything that she is supposed to! Anyone else have this issue, or is it just a 'me and Button' thing here?!? The day before she had slept - had a perfect day when it came to sleeping in fact, given us nearly 3 hours altogether, and had gone down super quick and super easily each time. But not that day... nope, sleep was NOT on her agenda!
So - we duly decided we'd put her down for her first sleep; I have discovered, the hard way, that she needs to have her first sleep before we attempt anything... this is generally the easiest one, although not necessarily the longest. Forty minutes after we put her down she gave up playing and started grizzling, 20 minutes after that again (so a WHOLE hour after we'd put her down) she was full-on crying! After a quick discussion, we decided that she must be tired enough by then that we'd just put her in the car and hopefully she'd drop off and sleep all the way to the zoo (a good 40-45 minute drive from us). HAHAHA - she chatted the entire way, not once even sounding remotely tired or interested in sleep....
We got to the zoo just before 10am, with an 8 month old child who had been awake since 6:30am - you can see where this is heading can't you?!? I gave her a quick feed, as she was due a feed at about 10am anyway... and then we toddled off, hoping against hope that she'd last long enough for us not to waste the $40 on our tickets. 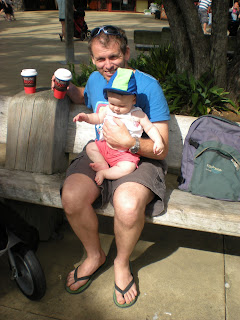 Button all fed up and hubby all coffeed up and ready to go...
We got through the giraffes and the zebra's, and then the grizzling started - she settled down though, once the stroller was pushed fast; so I became the family photographer, while Mr. C pushed the baby fast and missed most of it: 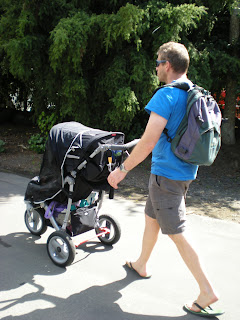 Did you see us racing around?!?
It got to the point though, that we needed to put her in the front pack, as even racing her around just wasn't doing the trick... so then I became 'Empty Stroller Pusher and Family Photographer', while Mr. C was the 'Baby Carrier'! I am so glad we had the forsight to take the front pack - she hasn't been in the pack for a while now, but there was a time that we never left the house without it! 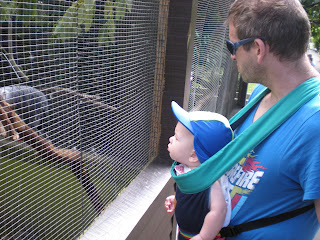 The only things that gained her interest were the big birds -
she was utterly fascinated in them as this and the next photo show... 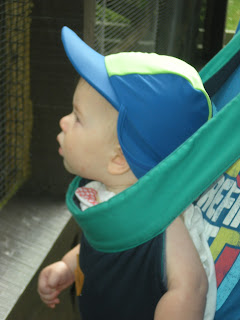 She was already SO tired by this stage that her eyes were red and glazed :-(!
After this we went into the Australian section, and didn't read the warning about the noise - well, she basically totally lost it at this stage.. so we got out of there as fast as possible, and I tried feeding her again once we were out. The idea was that with another feed, we could put her back in her stroller and she'd fall asleep - giving us a chance to wonder around and look, even if she missed out!
Didn't happen - and I have never experienced so many 'sympathy glances' from folk as we did that day, my baby girl is LOUD when she wants to be... So just after 11am we gave up and headed home again; and would you know it, she was asleep before we even got out the zoo gates - gutted!!!! Maybe if we'd held out a bit longer she'd have gone to sleep in the stroller after all?!?
Anyway - here are a few more highlights (well animals) from our very brief trip around the zoo: 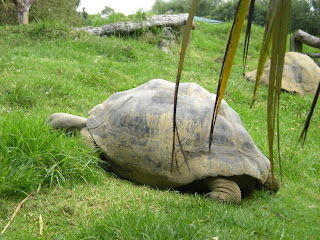 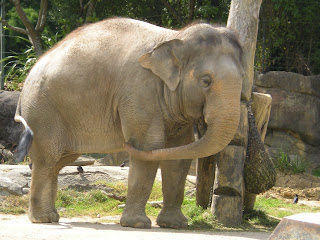 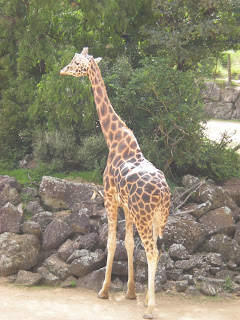 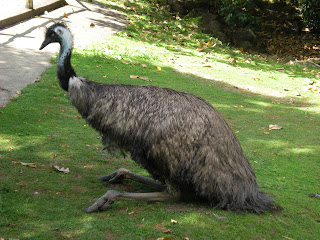 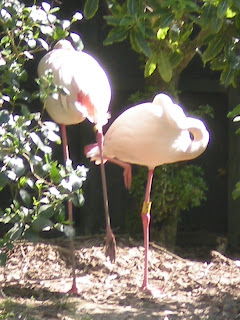 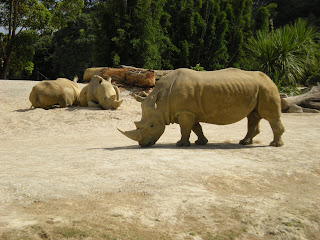 And just in case you thought Button didn't open her eyes during the entire time,
(only her mouth *grin*). here is the proof she did see some of it: 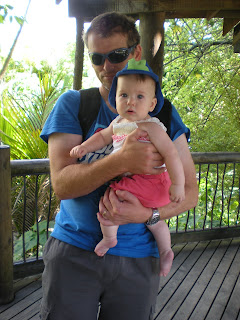 So, that's it folks!
Elizabeth
Family Going Out