February 08, 2011
Tuesday 8th February 2011
Ah yes, the joys of summer... mozzies. Ah yes, the joys of living (kinda) out in the country... more mozzies.
Oh mosquito's how I HATE thee. Yep - hate... there aren't many things I would use such a strong word for; fear maybe, but not hate! However I fear that mozzies bring the worst out in me, especially in the early hours of the morning.
Can anyone tell me why God created the mosquito? I have never been able to work that one out! 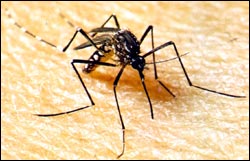