48 hours I Never Want to Repeat!

March 10, 2011
Thursday 10th March 2011
Wow - have we had a dramatic week in this household, and boy am I glad to be seeing the end of it! As I am sure everyone else is as well, especially Mr. C!
Guess I should start from the beginning...
On Sunday Button woke up early and upset, not like her at all - so we got her up and fed her, and then she filled her nappy. After this she was back to sunshine and smiles, and we were pleased to see the end of her constipation... this happened a couple more times during the day and each time she got quite grizzly and clingy for a while before the relief of a full nappy. It wasn't until the end of the day that it dawned on me that maybe she actually had a touch of a tummy bug (doh)! The neighbours had been working through one like that for a couple of weeks, so I shouldn't have been surprised in the least - but still...!!!
Mr. C had a day off work on Monday pre-planned as he had a good mate coming over from Australia - Andrew was staying with us Monday night, so he was really looking forward to having an extra day with 'his girls' and then the evening with Andrew (he wasn't due to arrive until mid-late afternoon). So we popped out and bought Button a highchair and did a few other things, including catching up with Mr. C's sister and niece. By early afternoon he started complaining of tummy pain, and muttered on and off about it the rest of the afternoon... but we are SO used to that with all his gluten problems, so I asked him if it was just a gluten tummy or more than that, and he wasn't really sure. He is one of those guys though, that just keep going and going - he mowed lawns that afternoon etc. I think he is just so used to working through a sore tummy that it is just second nature; most of the time he doesn't even complain - so it was unusual that he mentioned it a few times.
That evening, despite continuing to chatter to Andrew and I, I could see him getting more and more uncomfortable... finally at 9pm he made me get him a bucket and it was ALL ON. He started vomiting every 20-30 minutes, until finally at midnight I rung for an ambulance; I couldn't take him anywhere with Button asleep upstairs. I probably could have asked Andrew to take him to the hospital, but he was beyond a car trip; and Andrew was shattered after his flight and really needed some sleep.


The ambulance arrived, and the Paramedics gave him some meds but he continued vomiting; so they took him into Middlemore Hospital - they felt because his history with tummy problems, it was probably time he had some further testing done to see if what the underlying cause was... I was so torn between wanting to be with him, and needing to stay home with Button. However I am NOT a nurse, and can't stand vomit - can't hold a bucket, can't clean it up (will need to harden up as Button gets older I guess *grin*).
So no further sleep for me that night... but Mr. C knows me well, and rang me at 2am to tell me to stop feeling guilty and get some sleep, I had made the right decision to send him to hospital (although he did complain initially) and he would be okay soon... So sweet of him considering how bad he was feeling, as he didn't actually stop vomiting until 5am, and the nausea didn't really settle until 9am he admitted later (although he'd rung me at 7am to say he was all better).
Anyway - by 6am that morning I started feeling off-colour and was having the 'trots'; so rang Mum in a blind panic fearing the worst... begged her to drive up from Tokoroa ASAP; which, bless her cotton socks - she did, arriving at just after 11am! By 10am I was GREEN, so was counting down to her arrival.
You know what - who wants to read about this... certainly NOT me! Let's just say that Mr. C was a very sick man and is having loads of tests to find out why (had a colonoscopy today), but I just had one bad day like Button had.  It frightened the heck out of me, and I am still quite emotional about the whole thing. We're now awaiting the results - the main options are Celiac Disease or Irritable Bowel Syndrome; however his Specialist seems fantastic, and promised if these options both come back negative; they will keep doing further testing until they find the cause.
I am SO grateful that it is now over... Mr. C is sleeping the past few days away: 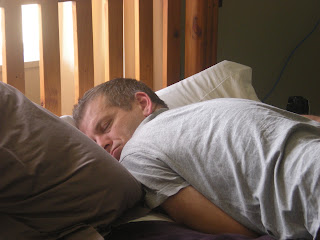 This photo was taken a couple of hours ago, and he still hasn't woken up!
Mum went home to her next crisis this afternoon (poor old Dad only got out of hospital with pneumonia less than a fortnight ago, and seems to be heading back down hill with it), so she has gone home a day earlier than originally planned.
So we are praying about the results, but we are also praying thankful prayers that we are all back together, and everyone is well again... Button coped with the odd week well; but it has been tough on her and she has not been herself at all. So hoping next week is calmer and saner and we can start to relax, breath and get back to normal again.
Elizabeth
Extended Family Mr. C Unwell

Girl Schmuck said…
Oh Elizabeth, So glad your getting better, and Hubby too. Oh and Lydia too. Good news about the puke thing. Just like being able to change a diaper, for some reason you are going to be able to clean up lydia getting sick all over you, the carpet and anything else. Its just the wonderful way God does things, have kids and he gives us moms ability to clean dirty diapers bums and other sickness. Relax and trust God.

Will be praying for test results for hubby. It was very sweet of him to call you and let you know he was ok. Poor Andrew.. Hope he is ok too?