March 15, 2011
Tuesday 15th March 2011
So - I rang Plunket the other day; Button has not been herself since the tummy bug last week and I was getting concerned (but wasn't sure if I should be or not). She is not eating much, and is not sleeping well during the day and not only requiring a dream feed, but also waking for another feed sometime between 4-6am - I haven't had to deal with this since she was new born! So I just wanted some advice as to whether or not she really was sick still and we had to wait it out, or whether she may be pulling our leg a bit...
Turns out, with all the information I shared - she probably still does have a funny tummy... I guess I knew this deep down, but just needed reassurance that I wasn't ruining our lives by feeding her twice during the night. Our neighbour, whom we think we caught the bug off, was like this for over ten days as well; just spoke to Laura (Mum) today about it, and she says the difference in little Luke this week compared to a fortnight ago is quite BIG. So that confirms for me again, that there really is something wrong - she is not a happy wee girl.
But one thing the Plunket Nurse did say is that I really needed to be feeding her more finger foods (as it might entice her to eat more), and she is at THAT age. Apparently there is a huge independence push at this age with most kids, and they start to insist on feeding themselves... we have seen it in other areas, such as her moving; but up until now she has been quite happy to eat what we give her, when we want her to (within reason). So it is with sadness that I have to say goodbye to easy, reasonably clean meal times - and hello to messy family meals. 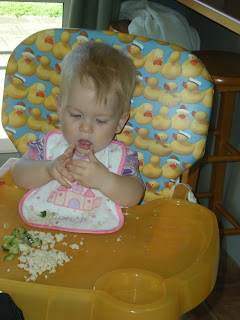 Mr. C is loving it, he has been wanting us to all eat together for ages - so he grabbed this opportunity with both hands and we have had two family dinners together now: 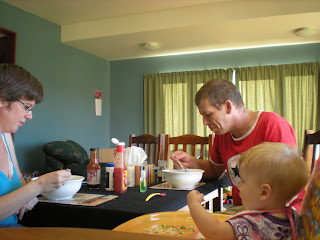 The problem with this, is I have to be so much more organised, as we have to be ready to eat by about 5:30-6pm... no more relying on Mr. C to come home and  cook, no more 'easy come, easy go' meals and no more romantic 'just the two of us' meals (not that we really ever did that anyway *grin*; just being mellow-dramatic here). BUT the upside is everything is eaten, cleaned and tidied away by 7pm - including the baby *grin*! So my evenings are even longer now; which has got to be a good thing! There is even an upside to the late night feeding - because Button isn't sleeping much during the day, with a full tummy she sleeps longer in the morning... this morning it was 8am, wahoo!! Of course I was still up at 6am with Mr. C, but I am thinking I might just sleep-in tomorrow morning, as these 4am starts are taking their toll. 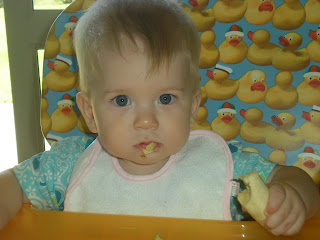 Can you see how much I can fit into my mouth?
And, in case you wanted to know - she is eating more now than this past week, and I think she is loving eating with us (I now also have lunch with her)... but it's still not as much as she used to. She has never been a big eater, but she was a good eater.
So now I also have to re-think through everything - I knew how much she needed previously in order to get through the night without a feed, I knew how much to defrost and heat up for her; what was a good meal, and what was a small meal that might require a top-up later on. But now I have to start all over again - how much finger food does she require in order to get as much food into her as previously? When she is feeling better, will be allow me to feed her portions again? How will I know when to stop giving her night feeds? Ahhhhh - so many questions, so much is changing... I just wish it wasn't all at once!!!!!

Ah well, we have survived up until now; I am sure we'll survive this also.
Elizabeth
Button Family Food Unwell

Amy said…
Hey Elizabeth,
Sorry to hear Lydia has still been a bit under the weather - Munchkin took awhile when he had a tummy bug too. He is also enjoying feeding himself...I eat with him every meal as it means I do actually remember to feed myself too! ;op He usually has some spoon-fed followed by finger food, that way I know he's eaten okay, and he gets to experiement. He is a bit of a stug though, so I usually only give 2 pieces on his tray at a time so he doesn't stuff his face and drop food all down his clothes!
On another note, lovely to read all your recent blog entries! Nearly finished the assignments here...
Amy
16 March 2011 at 13:22