So I thought I would share just a few photos of Button... as you see her probably 80% of the time these days! 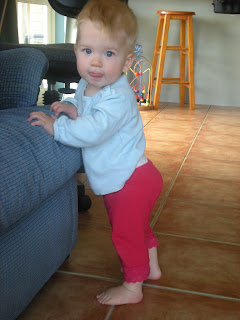 So this was taken at the beginning of the month, the first day she 'discovered' she could pull herself up against the couch... 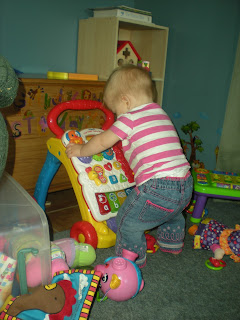 This was taken the first day we got The Walker for her, borrowed from my lovely sister-in-law... she knew instantly what to do with it (although you can see here that she isn't quite as confident as she was standing against the couch - it moves *grin*)! 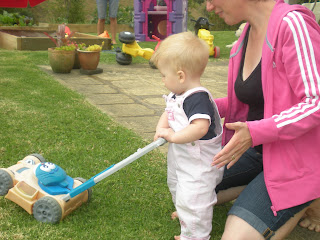 Then Gran came to stay and showed her how to hold on and WALK behind the 'lawnmower' outside, so she attempts this with the walker inside now (scary with tiles)! 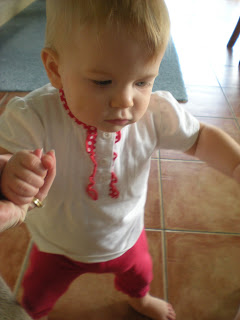 Then there is the inevitable 'I wanna hold your hand' moments, even if it's just to practise my walking skills...
The next few photos have been taken over the past 24-48 hours, as I try to document everything she is now using for her standing/walking skills; if it's bigger than her then it's a fair target to be used like this! Some of the photos show her half down - that's just me being too slow to capture the 'standing pose'; but will keep taking photos over the next few days and see how many different places I can capture her practising :-)! 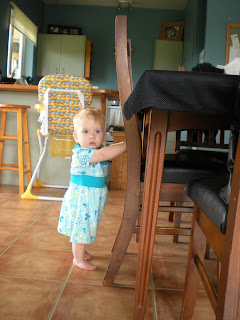 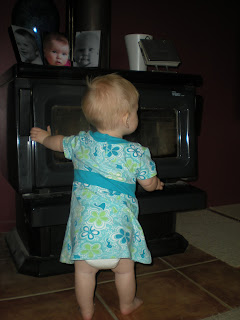 The fire place
(don't panic it will have a guard and a woodbox surrounding it by winter)! 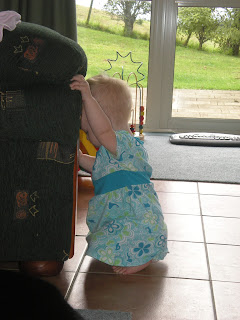 Our 'proper' lounge suite, this is much harder than the blue couch - it took her a couple of weeks to be able to do this one, as it isn't as soft and has nothing to grab onto! But with persistence she got there... 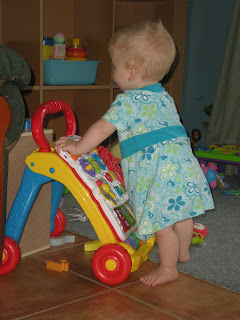 Look at the difference in her stance against the walker now - SO much more confidence! 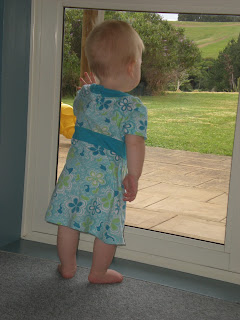 The window is a favourite, especially when the neighbourhood kids are playing, or the cat/dog walk past! 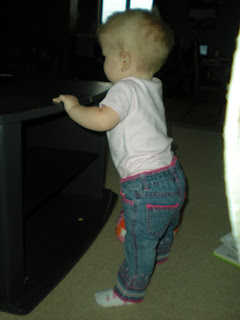 This one has only just been accomplished, with the lip at the top sticking out further than the bottom it took her a while to figure it out... but again, persistence paid off and she is quite confident now!
Well, that's it for now... bound to get a few more over the next day or so, but I am sure you get the picture with these ones here!
One Proud Mama!
Button Milestones

MaxineD said…
And in a few weeks you will be wondering why you were so happy to see her getting up!! She is making huge progress and will be running out to meet us soon!!
Blessings
M
22 March 2011 at 11:15

Girl Schmuck said…
Love the blue paisly dress. And I love the tongue sticking out her upper lip. Love them all.

Don't let any nay sayers tell you that it gets tougher now. Its awesome when they can walk, you just have to be more mindful. Create safe places and trust God with lots of prayer. I loved not having to carry them but to hold their hands and walk with them. ITs such a joy to see them discover.
24 March 2011 at 15:06