April 05, 2011
Tuesday 5th April 2011
We had a very cool weekend this past weekend... you'll have read bits of it in my previous post gloating about how much Button has grown up. But I was rather evasive about what we were doing on purpose, as I wanted to share it with you all here as a separate post!
I don't think we did much on Friday night - the only things of note is that Button turned 11 months, and Mr. C mowed the lawns (they're big and take ages, so it was great he got them all over and done with *grin*)! However, to make it a little more interesting - we did pop over next door for dinner! One of the young couples who live there are moving out, so this was kinda their 'farewell' dinner ... it was a pizza night, but of course Mr. C, being gluten-free, couldn't eat anything! So he ate before we went over, and we all had a lovely time anyway - and met a few new people as well!
Saturday we did some housework in the morning, and Mr. C worked on the amazing entertainment unit I have gloated about recently... then we got the information I had been waiting for regarding a sale at Gitmans (they make clothes for companies such as Pumpkin Patch and Merino Kids). So once Button woke up from her morning sleep, we popped her into the car and headed off - so worth the trip, look at what we got for $60: 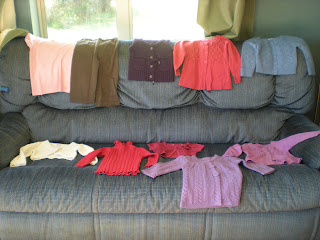 There are size 12-18 months, as well as some size 2 for next year as well... we have heaps of wonderful knitted tops for winter (thanks Noelene), but nothing for this in-between season, but now we have an abundance!  We also have a couple of merino items (short-sleeved top - possibly a singlet, and a pair of pants), both of which were only $10, and all other tops $5... thanks Gitmans!
We then decided that Button needed some time to play (she'd either been in the car or in my arms), so stopped off at Sylvia Park... I took her to the Playground, while Mr. C bought us some sushi for lunch; poor Button got a few of our left-overs, but I hadn't packed lunch for her as I expected to be home by 1pm - silly Mum! But she had a great time crawling around and attempting to put everything into her mouth - can't wait for that phase to be over! On the way to the car though, we stopped off at T&T as they were having a winter sale and managed to get these for her as well: 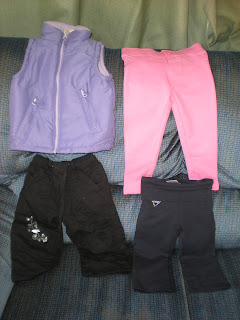 Then we started heading home, stopping off at Bunnings for Mr. C to buy some more sand paper for the entertainment unit... Button handled all this so well, and it was nice to get out and just do some 'normal' things, without wondering if she'd cope or what we'd do if she cracked and how she'd handle being put back in the car for the third time! Of course, I did worry - but by the time we got to Bunnings I was starting to relax and just enjoy it, as I knew home was in sight and I could handle whatever she threw at us from there... but she is growing up, and handled herself like a pro!
We got her into bed just after 7pm and she was asleep by 7:30pm just as my close friend Stephanie arrived for three nights... so I cooked us some dinner while she unpacked and relaxed a little, and then we had a lovely evening catching up together!
Sunday started out with a family walk, and then as mentioned previously Mr. C had committed us (having forgotten Stephanie's imminent arrival) to popping over and seeing some of his close friends... So once more we bundled Button in the car after her first sleep (apologising profusely to Stephanie), and headed out. I so WISH I had remembered the camera, but doh - it was still hanging up at home :-(! She charmed the socks off all the adults, and played crazily with the kitten; and while he was very patient, he isn't Pixel so we were watching them closely! She also played with Amber heaps, their 9 year old daughter... and this time I did take lunch for her, and they all gasped at how quickly she downed everything; she is not a big eater, but she is a good eater!
That afternoon and evening was quiet, we were meant to have some other friends for dinner so Steph could catch up with them as well - but they had sickness going through their place, so pulled out! We'd also found out that afternoon that the friend who was meant to be coming over for the Monday with her daughter to catch up with Steph, had strained her back and couldn't make it either... so poor Steph was stuck with just us, but I dont think she looks to worried, do you? Even Pixel seemed to enjoy her company... 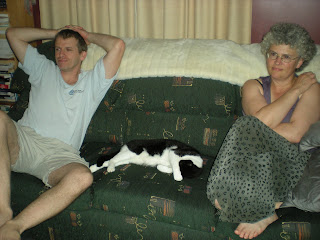 My weekend flowed over to Monday as Stephanie was still with us, and her and Button had a ball... I think the photos will explain it much better than I ever could: 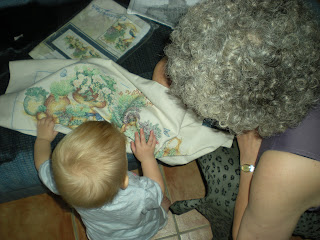 Explaining the intricacies of cross-stitch 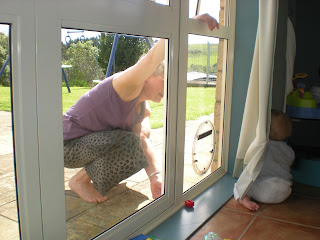 Above & below - Button playing 'Peek-A-Boo' with Aunty Stephanie 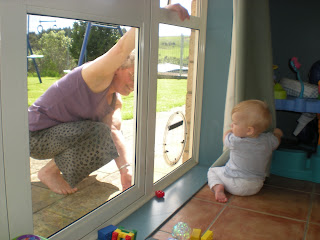 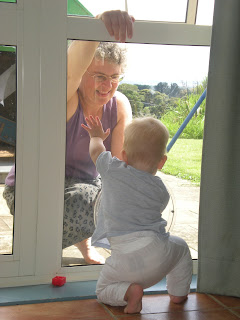 Aunty Stephanie and Button having fun through the window... 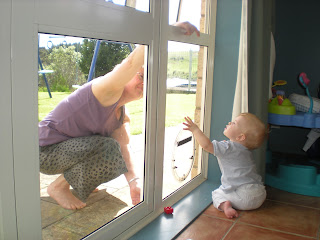 Hope your weekend has been as fun as ours was.
Elizabeth
Button Family Friends Going Out