While I'm on the Subject of Gloating...

I thought I would gloat about my talented husband... not only is he a clever cookie when it comes to computers and also programming (anything he doesn't know, is just not worth knowing - honest)! But he is also very practical and hands-on and great at building and D.I.Y and many other things... but the things I am (we are) most proud of, is his coffee table and the entertainment unit.
The coffee table took four years of talking before it got started, and then six months to complete in 2008 - but is SO worth it... here are a few photos of it in progress (before those teeth marks were added to it I might point out *grin*): 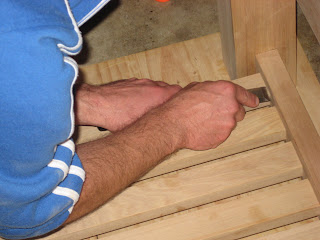 Mr. C finishing off the routering (spelling?!?) of the magazine rack underneath 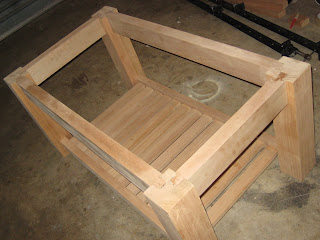 The bottom and frame finished... finally! 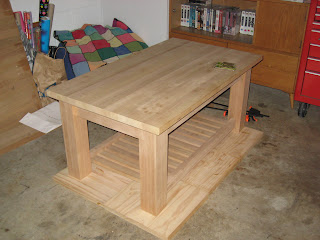 The almost finished but not yet oiled coffee table... 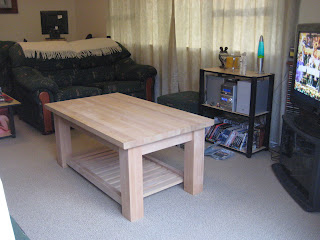 Check out how BIG it is in our previous lounge... 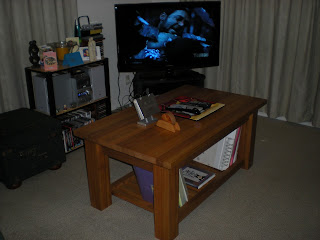 FINISHED AND IN USE 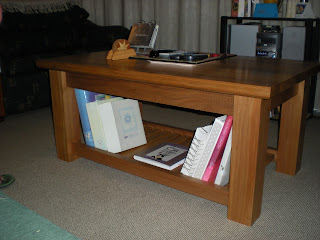 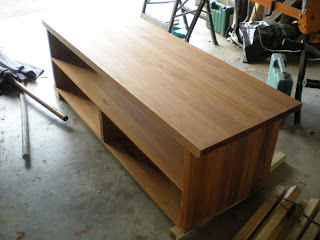 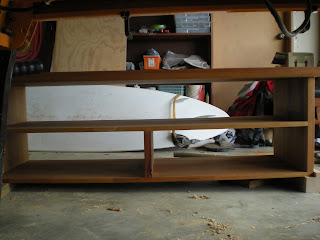 The photo quality is NOT good for these ones, as it is still in the making out in the garage - which is BUSY and FULL (it is shared by a few menfolk); so I have had to work around things and move things and look under things to try and even get a photo. You may need to use your imaginations somewhat though still...
The bottom bit is going to have two drawers in it - the rest will be finished and in the house by this Friday, and then hubby is going to make the drawers a bit later on and add them (they will take CD's and DVD's in time). The whole idea at the moment is to make the lounge a little safer for one wee girl who is currently into everything, so if it's within arm reach - it is so going to be grabbed, bitten and chewed... not good when it's electrical! 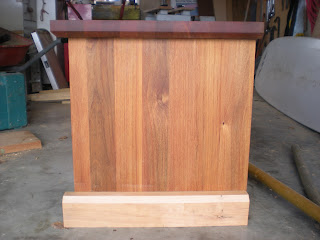 Now the best bit (at least I think so) are the chunky legs (yet to be oiled), the idea being that it fits in with the coffee table... But instead of doing them vertical, he has decided to do them horizontal and I THINK they look fantastic! You can see in the photos below he has cut out enough for the unit to sit into them, and has also sanded a 45o angle on the edge that will face out... both the Entertainment Unit and the Coffee Table have got a 45o angle sanded on the underside of them; so this matches those (you can see that on the photo of the Entertainment Unit above, but unfortunately none of the photos of the Coffee Table show it - but it's there, you'll just need to trust me). It's a shame it's hidden though, it takes him a LONG time to sand that angle, and he hides it on the underbelly of both pieces of furniture; I have mentioned this but... 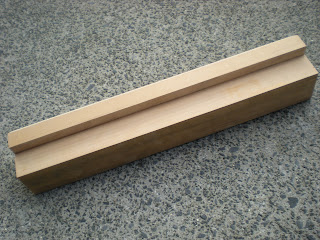 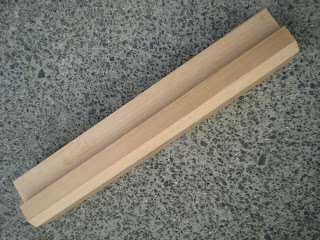 Anyway - enough gloating, the daughter has woken up and needs tending too!
Elizabeth
DIY Mr. C

Girl Schmuck said…
what a handy fellow to have around. Make sure you don't rent him out to others or he may not finish your projects. HA ha.

I should take pictures of the bunk bed that hubby built for my boy. Its very simple and wonderful.
5 April 2011 at 05:23

Amy said…
Hey Elizabeth,
The unit looks like it will be stunning!
My, Lydia sure has been busy with her teeth lately from the previous post!
Amy
5 April 2011 at 12:03