July 08, 2011
I have been inspired by Miriam at Make It Give It, she has done two great posts recently that have made me get off my chuff and DO SOMETHING!
The first one was called 'The Family Table', and she talks about how she taught herself to cook cheap nutritious meals for her family once her boys came along; and (if I remember correctly) she also talked about Meal Planning... and if you have been following me, you'll know I have also talked about it a few times (but never bothered to follow through on it, ouch)! Then this week she did one called 'Good Intentions Tuesday' and encouraged us (her followers) to join her in making Tuesdays a day to complete all those tasks that we have had good intentions to do, but...
SO - I'm putting these two pieces of inspiration/motivation together, and have borrowed a couple of  Destitute Gourmet Recipe books from my neighbour, and together with my own one - have been browsing and making meals; one successful, one not so! Yep, that's right... I've only made two meals so far from the cookbooks; but it's a start right?!? The third was a cheat one, and just a roasted chicken and veggies - but still yummy!
I haven't even started the actual Menu Planning yet, as I didn't decide to do this until after our last grocery shop; this has meant I am limited to cooking recipes that have ingredients  already in the cupboard (one of our money-saving ways is to now not go 'shopping' between BIG shops as we are way over-spending our grocery budget each fortnight). This has made it a little more difficult, and has meant a little bit of substituting (why Wednesday's meal didn't come out so well I suspect), however I am not giving up this time!
I did some 'planning' last time my parents visited, and it really helped with the stress levels each night when it came to deciding what to cook; such a relief, I don't know why I have been putting it off for so long (by the way, tonight hubby is cooking chicken omelette left over from the roast chicken last night, yummy)! So I am hoping that with the stress levels lowered, and new things to try - I'll be inspired for months to come ;-)!
Here is what I have been doing so far: 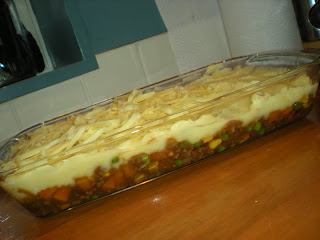 Shepherds Pie with no tomato
(Button still can't eat tomato or dairy or much citrus or peanuts or egg - you get the picture... she has allergy's and still reacts with reflux to acidic food)! 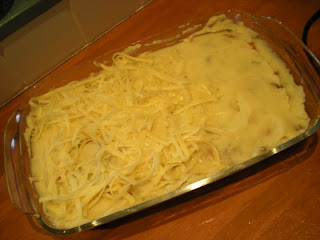 SUCCESS
Everyone enjoyed this meal, and while Button didn't finish the entire plate I dished up for her; she'd obviously enjoyed it and had just eaten enough! She slept right through to 7am the next day - so wasn't hungry ;-)!
Wednesday night was this: 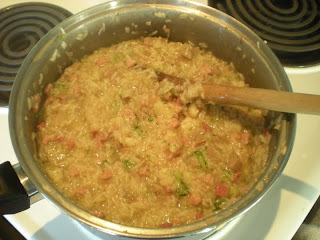 Homemade risotto
Unfortunately I'd had to adapt it a little due to the pantry not having everything required... so it was richer and saltier than I think it should have been, and got thrown out that evening :-(!
However - it wasn't a complete failure, as Button LOVED it (she had hers without the cheese we had, which is why I think it was SO rich) and Hubby said he hadn't seen her eat dinner that quickly for a long time! Would have kept it for Button and frozen it, but we felt it was a little too salty. 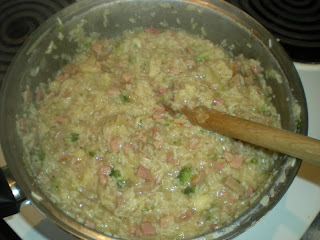 FAILURE!
But I am taking heart - as at least it was still eatable enough, that we ate it the one night anyway... it didn't get thrown out on the first mouthful *grin*!
Then last night was a cheats easy meal - but still yummy and nutritious; heard no complaints (except from Button, which I'll explain below): 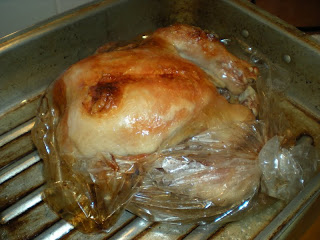 I make a mean roast chicken if I must say so myself ;-)! 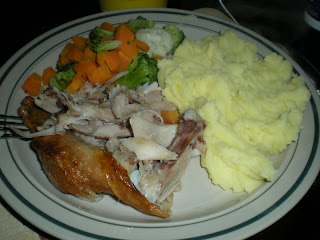 Our Doctor told us that we need to keep trying Button on a little bit of dairy every now and then and see how she reacts... so last night I made the decision that she could have some of our mashed potato (mashed with milk and butter of course), rather than mashing hers separately.  Silly Mummy - her little system had never had that much dairy at any one time, she'd only ever had smidgens before; but I had thought that with it being mashed into the hot potato, she'd cope!
Poor wee chicken - half way through the meal she stopped eating and started grizzling... after trying everything to encourage her to eat, we put her down and as we did that, dinner came back up :-(! I have never seen her react so quickly or dramatically to dairy, I think her allergy is more serious than what we'd realised - up until now she has only ever come up with a rash over her face. We didn't put two and two together until later, but she'd been perfect all day - got stuck into her dinner (we just gave her the chicken and veggies to eat herself, and fed her the potato), and it wasn't until I started giving her to mashed potato that she started getting grizzly. After she'd calmed down she was fine again, ate a bowl of fruit and farex half an hour later, slept all night and didn't wake up until 7:30am! So it was not some kind of bug, and the only other possibility is that she choked on something - but there was no gagging or choking prior to this.
Felt awful later that night when it dawned on me it was probably the dairy... we won't be doing that to her again for a LONG time! Her spuds will now be mashed separately again!
Anyway... I have decided I need to be able to stay accountable for my meals, so will be using my blog for this. Of course I won't be doing a night by night photo and 'discussion' on my cooking like this time; rather I'll pop in once a week, and give you the highlights... and just talking about the successes (unless one failure is SO bad I just have to share in order to give you a giggle *grin*)!
Elizabeth


PS - how cool is this, Widge also has just done a post on cooking, so go check it out here!
Allergies Button Cooking Goals Me

kiwimeskreations said…
Well done - keep up the good work, and the learning :-)!
Poor Button - thankfully she will very quickly forgive and forget, and never hold it against you!!
Blessings
M
8 July 2011 at 14:04

Anonymous said…
Yay! So pleased you felt inspired. Love that you shared the not-so-successfuls too - we're all in on those experiences! Glad Button was okay - that must really add to the pressure with meals.
8 July 2011 at 15:57

Widge said…
man dealing with intolerances and allergies must be so difficult, I've always really felt for those that have to watch what they eat that way.
Your roast chicken does look goooood
8 July 2011 at 17:33

Barbs said…
Hi Elizabeth. My daughter has lots of allergies too and we had lots of bad advice at the beginning from the doctors. I have started a foodie blog with lots of ideas that we use for Em. www.theallergykid.blogspot.com
12 July 2011 at 10:28