How to Encourage Your Child to Eat...

We just hit the point this week where Button decided she didn't want to eat dinner... nope, and over it went on the floor! This child has been an amazing eater, and very easy to please and feed right up until now - so I have been at a loss as to what is going on. Admittedly she is teething - but she has been teething for 5 weeks (well, ACTUALLY she has been teething almost non-stop since June, I kid you not); and she hasn't lost her appetite over it before... so I suspect this is Mummy trying to make excuses for toddler behaviour!

I have been dreading this stage, my neighbours son has just snapped out of it, and my niece is also going through it - it was kind of inevitable I guess! I just don't like the thought of her waking up during the night hungry - it twists up my insides, I LOVE my sleep and an struggling enough with the teething disturbances!

So yesterday's offering was completely discarded - roast chicken, vegies and mashed potato/kumera... so I heated up some of the shepherds pie from earlier in the week that she had eaten (I know, I know - I am setting myself up here, but see the last sentence of the paragraph above). This to was ignored - thankfully hubby arrived home then, as I was on the verge of... well, I'll leave that to your imagination! He managed to get the Shepherds Pie into her, and then told me to jump in the car, and he took us out to buy fish n Chips for dinner (for us)! He had assessed the situation and felt we all needed to get out of the house briefly... Button loved the change in routine, squealing in delight through-out the car trip there and back!

Then today I had one of those 'brilliant' ideas for recycling the discarded meal from yesterday... I mixed it altogether, with some other bits from the fridge, added 1/2 cup of flour and some oil to bind and came up with these beauties: 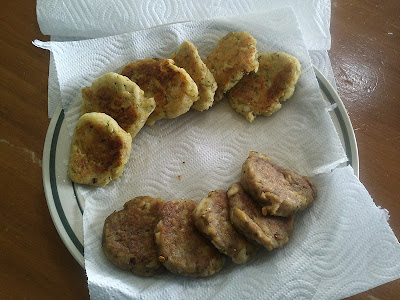 The smaller darker lot have a small amount of soy sauce added to the mixture to change the flavour a bit...

Not only did they turn out okay (and not just okay even - they were GOOD)... but they went down a treat! Button throwing 3.5 of these down in super quick time: 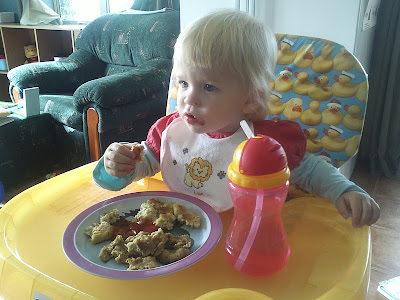 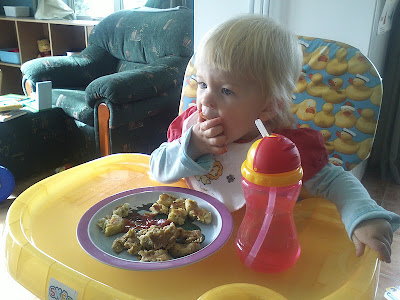 After my previous post about lack of ability in the kitchen, I just had to do a gloat!

Ange (Tall, Short and Tiny) said…
Having just come through this phase, I can totally sympathise!! It's just another toddler-testing-boundaries stage, but it's super frustrating, huh?!
Such a good idea to make the patties and offer something "different" :)
5 November 2011 at 07:41

jacksta said…
kids at this age are so hit and miss...one day they like something the next day not so much! Very frustrating...especially when you know they ate bound to wake up hungry in the night
5 November 2011 at 08:40

Anonymous said…
I HATE this stage of toddlerhood! Hehe. Pasta used to be my fail-safe go-to with Bean...he now refuses it outright. Grrrr and he's FOUR! So not really like he has "toddlerhood" to blame. I can totally sympathise. TOTALLY. (Wow that's a lot of caps in just this one comment sorry!)
5 November 2011 at 10:14

kiwimeskreations said…
Hmmm - can't remember this stage - you ate or went hungry, end of sentience. In fact there were days you got your tea presented for breakfast. Yup - I was a mean Mum!!
Those patties were a brilliant idea.
Blessings
M
5 November 2011 at 11:25