It was Mr.C's birthday on Saturday - again, I am rather late with the actual post... but better late than never right?!?

We are learning that opening presents with a toddler around is quite different to opening them when she was too little to understand! I remember watching my sis-in-law and niece last Christmas - Sienna wanted to open EVERYONE'S presents... it was cute, but! Sharlene was fantastic - making sure she didn't open everyone's gifts, but did allow her to open Mummy's gifts; I think this is something we will need to be aware of this Christmas! There is 13 months between Sienna and Button - so she'll be, this year, where Sienna was last year... although it is hard to know where Sienna will be at as we won't see them on Christmas Day this year!

So here are a few photos of Button 'helping' Daddy: 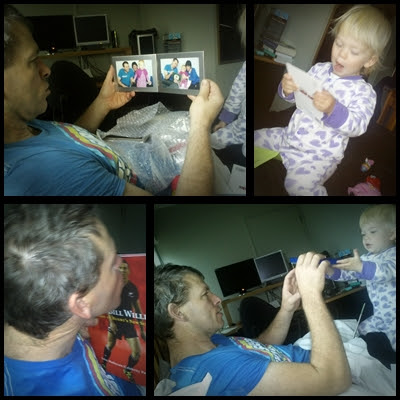 Top Left - Family photos framed from my brother and sis-in-law... a big hit with the hubby and daughter!
Top Right - Button getting excited over the card from Nana and Granddad (Luke's parents) as it has a dog and a cat on it! She is obsessed with animals!
Bottom Left - 'Man-Crush'! Mr.C thinks SBW (Sonny Bill Williams for those not in the know... a NZ All Black) is the best think since sliced bread, so my parents bought him his book!
Bottom Right - Button and Mr.C posing for the third time; Button giving Daddy his birthday gift from her!

The rest of the morning was quiet as we made decisions on what to do... the plan had been a family picnic, but the weather didn't do what the forecast had promised and so we decided not to risk it in the end. So instead, I made Mr.C and I a nice lunch while Button had her sleep...

When she got up we had thought we might go down to Butterfly Creek and see the animals - but in the end it was too late, as it was 2pm by then and we had guests arriving at 4pm. So just to get out for the afternoon, we decided to head to the brand new shopping complex across the road from Sylvia Park - it had only opened on Wednesday... best decision we made all day! We only had time to stop at Animates and Mothercare - but there were animals available to play with at Animates, and toys available at Mothercare: 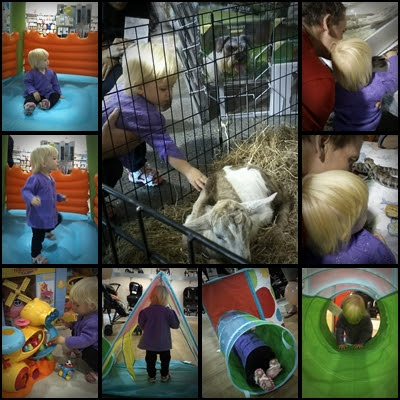 I did start to wonder whose birthday it was... but as the saying goes 'When Button is happy, Mr.C is happy' (at least that is what he quoted to me *grin*)!

We got home just on 4pm, in time for Uncle Russell and Aunty Rowie to show up and spoil Button some more (she adores them) - oh, and pass on their birthday wishes to Mr.C!!!!! Then while I chatted with Rowie, Mr.C took Button outside - the neighbours had brought some new toys back from the Toy Library for summer and Button still hadn't had a chance to play on them: 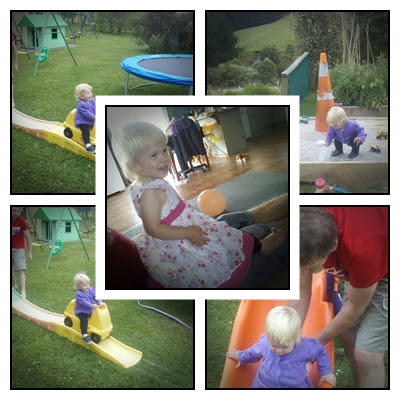 The day finished off with home-made pizza for dinner cooked by Rowie, and shared with them and Sam & Laura from next door!

Mr. C had a lovely day - even if it was different than what we'd planned or what he is used to *grin*! For his birthday treat from me, we'll be going out to see 'Mission Impossible' next week by ourselves... his choice!

kiwimeskreations said…
Now that is really pushing the birthday out :-) Glad he enjoyed it!
Blessings
M
13 December 2011 at 14:55