For the purpose of being honest...

December 04, 2011
I promised you all a whole lot more honesty on my blog these days... so here goes one of those posts!

It has been a rough couple of months for us - yep, we're far from perfect; but we've not been a couple who have fought much in the past. However for some reason, these past couple of months seem to have brought out the worst in us... it has been niggle, niggle, bicker, argue.

My poor Button - one day we'll be all 'happy family', and manage to get through a whole day without even a disagreement, but the next could be the total opposite.

But in all this - I know, that I know, that I know... we're going to be alright. It has never entered my head that we wouldn't be; I know all marriages go through these tough patches, and I know we are strong enough to come through it (no matter how angry I was on any given day). I also know how loyal Mr. C is - he just wouldn't walk out, he'd do everything within his power to sort it out BEFORE he even contemplated the thought of walking. Basically we have promised each other this is for life, and we meant it...

I think the thing I found the hardest is that normally I am the one who starts things - I niggle until I get a reaction, but he is the peacemaker between us, and normally the one who will apologise first. This time round it felt like he was starting all the fighting and not everything was getting resolved or sorted before the next fight started... very unusual.

Anyway - it all came to a head a couple of weeks ago (trust me - you wouldn't be getting this post if we were still in the middle of it all *grin*) and I ended up taking Button to church by myself... after having run up the stairs to take a shower, in tears, and yelling at him to leave me alone and stop picking on me. You'll know I am now seeing a counselor to get some help for some on-going issues - well, it felt like nothing I ever did was enough that particular weekend.

I arrived at church late, and a few minutes later they excused the kids for Sunday School and Creche - but I kept Button in the service with me, as being an 'solo parent' that day, I'd have had to have gone out with her. Twenty minutes after I arrived, Mr. C turned up - in a much better frame of mind, and Button was all over him like she hadn't seen him all morning! When she got a bit rowdy he offered to take her out himself (which he does most weeks out of courtesy for me anyway) but asked if I could join them for a few minutes to begin with.

So I did... after having been out in creche with her for a little while, Mr. C beckoned me to pop outside with him and Button (she was outside on the bikes already - any chance, and she is gone). I was a bit apprehensive after the way the morning had ended, but went out as I knew he wouldn't start a fight in public. And in fact, it was the complete opposite...

I am SO grateful for a husband who listens to God, and instantly obeys... He said he was having a shower and God showed him how selfish he was being and how he was putting himself before me. God then reminded him I was hurting, but in the process of getting help. He apologised to God, got out of the shower, got dressed and headed straight down to church so he could apologise to me as well.

Now don't get me wrong - it takes two to argue, and I was no saint in this episode either; but I needed to hear that apology, I guess it was just where I was at. We talked, apologised to each other and haven't fought since - the atmosphere in our home is so much calmer, and Button is sleeping better and behaving better as a result. I feel like it has been resolved, and not just swept under the carpet also - which is important. My husband is a man of his word, and he has stuck to his side of the bargain (or apology in this instance) and has not brought any of this stuff up again, or complained about it again; nothing really. He has been amazing...

Then this evening it dawned on me - Mr. C came off his anti-anxiety drugs about the same time, and we believed there were no side effects... hmmmm, maybe there were no physical side effects, but now I am starting to wonder if this was the cause of the arguing (because as I said above - it was highly unusual). So, maybe there were side-effects, just not the ones we were looking out for?!?

Food for thought there...

Have I mentioned lately how much I love this man: 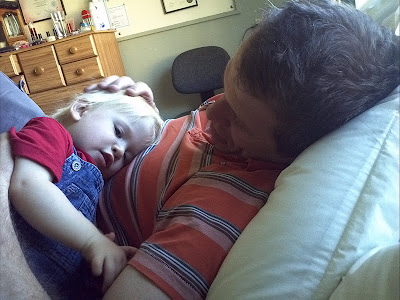 Widge said…
awwww this post had tears welling up! Been there. Many more times than I'd like to remember ;)
Marriage aint always easy that's for sure. Love that you guys made up xoxo
5 December 2011 at 09:07

Anonymous said…
What a beautiful testament to your marriage vows and your faith. Had me welling up as well. :)
5 December 2011 at 10:13

Anonymous said…
Love what you said about promising for life and meaning it. I really feel that when people don't give themselves the option of splitting up there is usually a way of working things out.

Miriam said…
Beautiful post. The love on the other side of the tough bits is so much better and fuller (if that makes sense!)
5 December 2011 at 16:46