December 04, 2011
At the beginning of September I lost my engagement ring... it is one of those odd stories really!

Since I had Button, I lost an extra 10kilo's of weight from pre-pregnancy days - this meant all my rings were super lose; and I was well aware of this as it felt like I was losing them daily! I lost a cheap family ring earlier in the year (down a drain pipe)... but had managed to hold onto the more important rings until then. But one morning I was throwing bread out to the birds - and, as usual, the neighbours dog bounded over and gobbled it all up before it had even left my hand ;-)! A few moments later I went to play with my ring... it was gone :-(! My Mum was up visiting, so we spent ages on our hands and knees searching for it - but there has been no sign of it since. We think the dog may have eaten it up as he gobbled up the bread; and I wasn't going to chase him around with a pooper scooper for days.

A few weeks later I rang the insurance company and lodged it... and we started the fun stage of trying to find another ring that I liked, and that went with my wedding ring (they had been a set). I found nothing for ages - we searched Botany, Sylvia Park and Pak Plaza; but nothing stuck out within the price range we were given.

Then Mr.C came up with trying Onehunga Jewelers and we never looked back - their service is impeccable, their patience was phenomenal; and they just keep trying until they found something I liked! My parents very sweetly sent me up my Grandmothers wedding and engagement ring and suggested we used the gold from these to have my ring redesigned and made as similiar as possible to my previous one; but in the end this just wasn't a viable option.

Eventually we found a single solitaire that I liked, then with my Grandma's diamonds included down the sides of it - it looked enough like my old one to 'feel comfortable', but different enough to remind me it isn't the original... and with Grandma's diamonds in it, it beings back a certain amount of sentiment as well.

So here is the finished product: 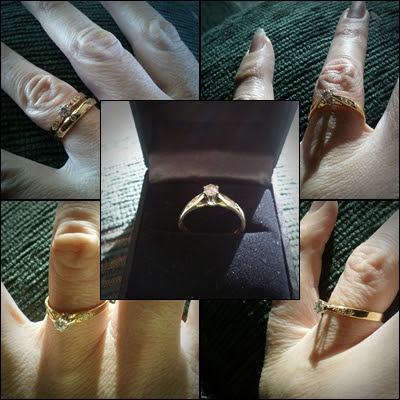 Man - these photos make my hands look old and wrinkly!

Then just to top it off, they turned my Grandma's wedding ring into a signet ring for me; using a hand-engraved cuff-link that my parents had also sent up, and welding that onto the top of the wedding ring. I LOVE it, it is one-of-a-kind, and it means I have 'my family' ring back also: 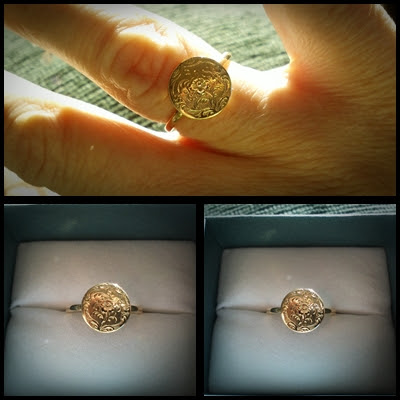 I highly recommend Onehunga Jewelers - we got the best service I have ever had, and yet I was highly impressed with the service we received at most Jewelers this time around! But Onehunga stood out above the rest... If you ever need new or replacement jewelry, pop in there first; you won't be disappointed (and tell them I said hello)!

PS - Onehunga Jewelers have no idea I blog; let alone have written about them... this is not a advertisement, nor is it a sponsored post.

What would you have done? Tried to replace it as close to the original like I did? Replaced it with a completely different ring? Took the money (we looked into this, but it wasn't a realistic option for us, as they would have only given us 50% cash back, and then then off the excess off from this again - total rip-off)? Not bothered even claiming it? I was in two minds due to the sentiment attached to the ring - I knew I'd never get that back... but I am now glad we chose to follow through.

Cat said…
I'd be devastated if I lost my ring, as it is designed by Mr B and is hand made by a local jeweler - I also wear my Mothers engagement ring, and my Mothers 25th wedding anniversary ring.
I love your new ring and the signet ring is darling!

Anonymous said…
Oooh, love your new rings - all the best pieces of jewellery have a story behind them :) I would have had them replaced as well. :)
4 December 2011 at 10:17

Aynsley said…
I thought I had lost my engagement ring when we shifted - it turns out I had successfully hidden it in another drawer in case it got lost during the shift. I was contemplating putting in a claim to get a new one but luckily didn't need to. I also have my grandmothers enagagment ring which I would love to pass on to Lucy to possibly make into her engagement ring.
4 December 2011 at 10:51

kiwimeskreations said…
So glad you hare happy with the outcomes.
Blessings
M
4 December 2011 at 14:06

Ange (Tall, Short and Tiny) said…
Hmm, tough decision. Tall chose my ring himself, so if I couldn't find something identical (unlikely unless the insurance company paid for us to return to England where it was bought!), I think I would get him to choose the replacement. Your new ring is gorgeous, and the story behind it is enough to give it sentiment already - the rest you'll build :)

A friend of mine is onto her 3rd engagement ring, because she was never happy with the 1st two...THAT makes me uncomfortable, because it wasn't like she lost them, she just changed her mind. Twice :/
4 December 2011 at 19:24

Amy said…
I just love your signet ring, so unusual and pretty!
I'd probably get a replacement that is as close as possible to my current ring/s as I have yet to see anything I like nearly as well that will suit my little fingers! They were made by a local jeweller using my grandmother's wedding band and the diamond from her engagement ring (which was too chunky for me to wear). The funny thing is that they are worth very little in monetary terms, but I love them so much, both for the history and the beauty!
Glad you were able to find something you like, and be able to share some lovely stories with your children and future generations about your rings.
7 December 2011 at 08:40