Check Out My Newest Baby... 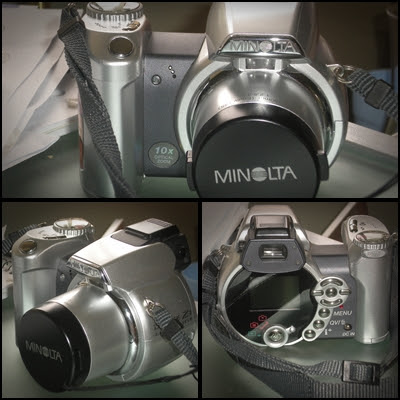 This little beauty belongs to ME!

During the week before Christmas I got a phonecall from my Aunt - she'd been reading my blog, and noticed all the bad quality photos and the corresponding complaints! SO; I got offered a 'new' camera by her - apparently she is known as 'Shirley-Two-Things', but when it comes to digital cameras, she had FOUR of them! So I willingly took one off her hands, a very kind niece I must say; such a sacrifice ;-)!

In digital camera terms - it is OLD... 2003, nine years old! But it takes wonderful; let me repeat that, WONDERFUL photos!!! I love the amazing close-ups, and the colours - let me show you: 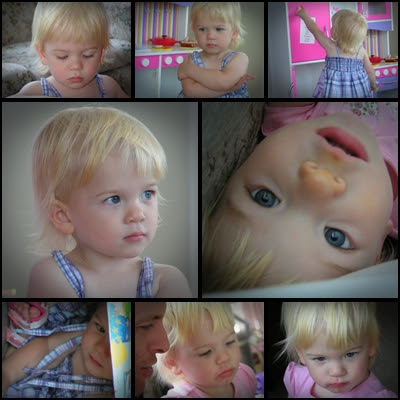 Look at those gorgeous blue eyes...
I couldn't take anything even remotely close to these with my old camera; the quality of photos from it is total pooh compared to these!

Ahhh; I think I am in-love... thank you Aunty Shirley, other than it's size - it's perfect!

We bought a canon back in 2005, it was probably similar size to this camera - but I found it heavy, and it didn't fit in my handbag! So after a trip to Australia with my Mum, we sold it onto them and chose to buy the current 'dying' camera we now have!

I blame this on Mr.C though - generally he does his homework, he does not like spending that much money without thoroughly researching what we want, and making sure we get the best quality for the price we're willing to pay. However, this time it was a snap buy - he'd put off the purchase until literally the day before Christmas (six months AFTER we'd sold our canon), and three days before we flew out for an oversea's holiday. And right from the start we have been disappointed... but there was no way it was going to be replaced until it died, due to the money we'd spent on it!

Mr.C still blames me - same reasons as above... apparently I should have done the homework this time, as it it my passion / interest. He may have a point (but don't tell him)!

We have had a few 'discussions' (read rather HEATED ones) about this recently, as I have been insisting we get a new camera before baby comes; you just can't get that newborn time back! He keeps telling me that we bought me a smartphone with a camera, and that should be enough... but it just does not have the quality, or the close-up ability I wanted. GREAT for those spontaneous moments where you don't have your big camera on you; but not so great for the day to day stuff!

I THINK I was slowly winning the argument (ooops, discussion); but this time the homework was placed directly on me ;-)!

You can imagine, when I rang him at work with my Aunt's offer - and said she'd like us to pop in on our way south on Christmas Eve, a bit earlier than we'd planned, to pick it up... what his reaction was! He was THRILLED, and more than happy to work with her when it came to time (she was heading off to work that afternoon)! This way - we both win, and what could be better! I get my 'new' camera, and he didn't have to spend a cent!

So we did... and not only did I get an amazing camera; but Button had fantastic time as these photos show (these photos taken by my old camera): 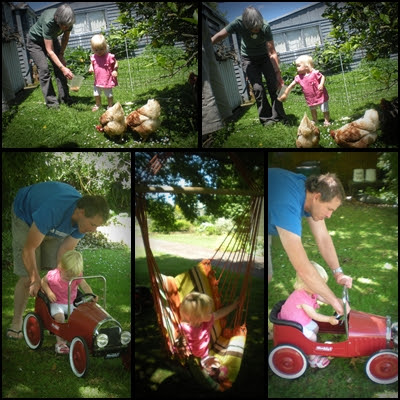 So it really was a win-win-win situation for us... in fact there were tears and tantrums when we tried taking Button out of the old car to give her lunch! CUTE!

BUT - this is not the end of the story... (bear with me here): Every year Mr.C's parents give us all money for our birthdays - mine is spent before I even get it, and only ever on myself! Mr.C is a thinker and a giver - he is very generous, and almost every year at least some of 'his' money is spent on me (whether it be dinner out or movies etc)! This year he had decided we'd go to the movies, but we haven't made it yet...

Anyway - long story short, while we were away on holiday, Mr.C was/is SO impressed with the quality of photo this camera takes, he bought me some new SD Cards for it with 'his' money... Aunty Shirley still had the original SD card with it (16mb) which took only about 40 photos at a time, and our 8 gig card from the previous camera was WAY to big! The biggest it can take is 2 gig; so he bought me two 2 gig cards, to make sure there was enough space to take as many photos as I could possibly want even when we're away! When I asked him why he did this, when we could have easily afforded them in the 'normal' budget - he said that these were as much of an investment for him as for me!!!!

THEN - just to finish off this very LONG story on an even brighter note; he went on to say that once this camera dies he thinks it would be worth investing in a really good quality camera with all the extra bits and pieces!!!!

And all this because of my Aunts generosity... thank you Aunty Shirley, I will never forget your gift!!!!!

Anonymous said…
My absolute pleasure, glad the camera being put to such great use and I am sure that it will be good for some time yet- they don't make things like they used to!
4 January 2012 at 21:28

bex said…
hello! i'm rediscovering the world of blogs... i love our canon camera - capturing incredible photos becomes just a little bit easier when you have a great camera at the ready!
5 January 2012 at 17:42