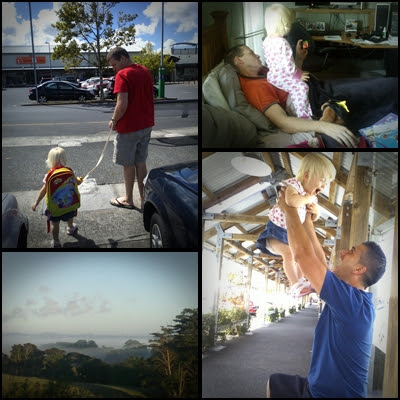 Bottom Left: The morning started off a little misty; first signs that summer is slowly losing it's grasp on our part of the world... hmmm, if you can count this as having been summer!

Top Right: Button found Mr.C to be a very comfortable La-Z-Boy that morning also... especially while she played with his smart phone.

Top Left: We went hunting for a Wiggles Bag for Playcentre for Button; had been told of a shop where they could be found in Howick! We located the shop, and located the perfect bag... Button held the bag in front of her face just soaking it all in, from Howick back to Botany. Once we got to Botany she didn't want to take it off; too cute!

Bottom Right: That is until we bumped into Uncle Phil at Botany (oh, and Aunty Kat)... and suddenly the bag just got in the way! 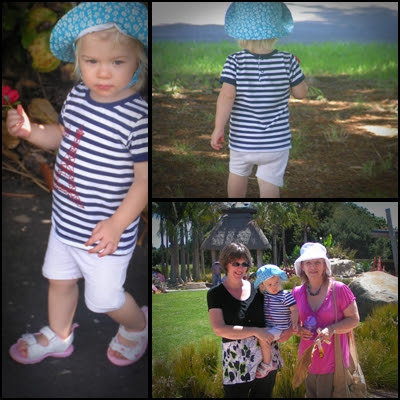 Nana came up to stay with us over that weekend, but unfortunately by Saturday afternoon Button had woken up with quite a bad fever, and only got worse and worse (not actually coming right until Tuesday, poor little chicken). We popped out briefly on the Sunday to try and distract her, and get poor Nana out of the house... in the end it was a very quick walk and picnic at the Botanical Gardens, as even this wasn't enough to cheer poor Button up!

But despite the fact you can see she looks under the weather, they're still cute photos with her holding the rose that Daddy had 'borrowed' from one of the gardens to try and cheer her up!

In the bottom photo I am 32 weeks pregnant... better photos to come though ;-)! 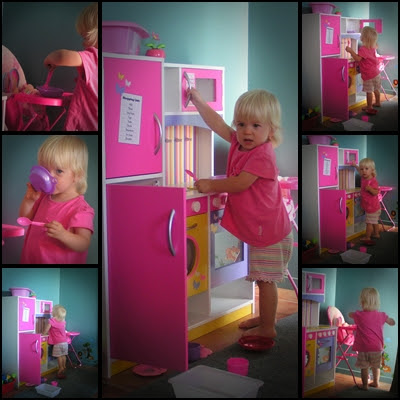 I suggested to Button that she 'feed one of her babies', she had seemed at a bit of a lose end! So here she is 'feeding dinner' to her doll... not sure if you'll be able to tell but here are the steps she took!

1) First it was straight spoon and bowl and baby...
2) The she remembered she needed to blow on the food so it was cool enough to eat (second photo down was not her actually eating the pretend dinner, it was her blowing on it)!
3) Then she realised that in order for it to need cooling, it needed to be heated up first - so up she hopped, and opening the 'microwave' in her kitchen, she popped the bowl inside, shut it and turned to me for approval.
4) I talked through the steps with her, and then she took the bowl out and proceeded once more with the blowing and cooling step, before 'heating' it a second time and then feeding it to her doll!

It was amazing to watch her work this all out, and I am so glad I had the camera handy at the time... I have never seen her use the microwave in her little kitchen before, so even seeing her work all that out was amazing to see! It blew me away with how much she takes in on a day to day basis - you know it, but until you see it in action you're just left wondering! 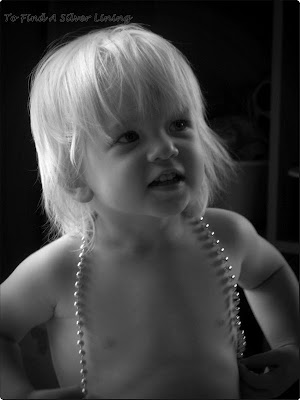 Nudey Run - Daddy was getting her ready for a bath when she escaped! Only photo I took that will be shared *grin*!!!! 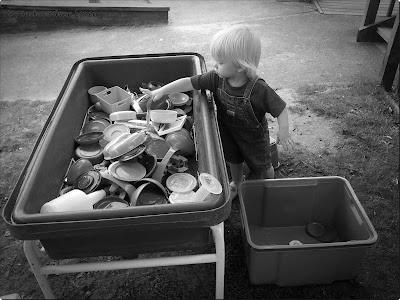 More waterplay at Playcentre... Button has just discovered the trough of water, up until now she has been quite reluctant to play in it - preferring the taps as previous photos have shown! But the prospect of putting every single toy into the trough was just to great a temptation, and she succumbed - spending a good half hour or more out there!

shannon said…
Really lovely photo's Elizabeth. That kitchen is superb! I'm sure it would be any little girls dream
28 February 2012 at 14:06

Anonymous said…
Love the nudey run photo. So Beautiful! Button goes through so many of the same stages as T. He is obsessed with big Brothers wiggles Kindy bag and loves to put things in it and wear it around the house :).
2 March 2012 at 21:48