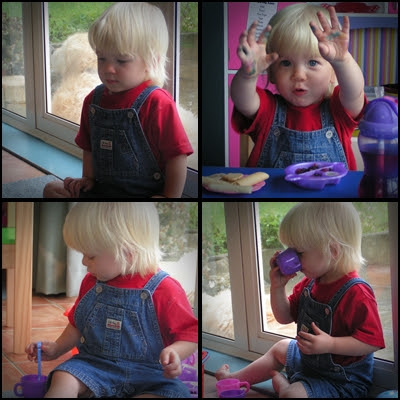 It has started to dawn on me, that there are not many weeks left of just 'me and Button'; and I need to make the most of this time while I have got it. Lately we have been having a few tantrums, and the day before this had been a tough day - so I decided a more 'Mummy-Focused' day was necessary... and spent the entire morning ignoring housework and anything else that called my name and we just played together.

This series of photos shows Button at morning tea time - I decided to set up her snacks in her little tea set, on her little table (first time I had gone to this extent), and as you can see; it was a BIG hit! Leading onto pretend play with pouring and then stirring a drink, followed by drinking it and sharing it with me! 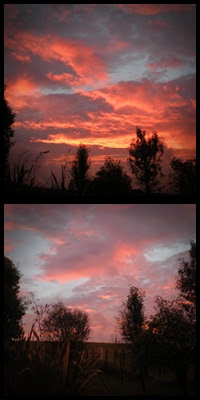 The day finished off with the most amazing sunset ever :-)! 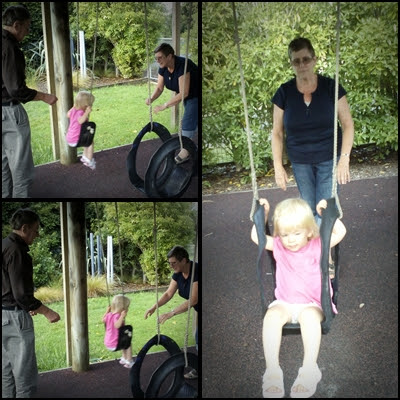 It was a VERY busy day today... starting off with Playcentre. When we got home from our session, Gran and Poppa had arrived to spend the weekend with us - much to Button's delight! After her lunch and sleep she got to play with them, before we had to pop out and meet Daddy at The Radiology Group for a scan; apparently our wee man didn't grown as much as he should have the previous fortnight. But all is GOOD, he is slightly below average (currently sitting on 4pds), but not enough to be even slightly worried about... and theoretically he should double his weight in the next few weeks; which will make him bigger than Button once born anyway!

Once we got home from this, we were off back to Playcentre again for a 'Family Fish n Chips' night (where the above photos were actually taken)... by the time we got home from this poor Button was shattered, and after a quick 'dessert' to fill her up - she was popped straight into bed, and went almost instantly to sleep! Busy but fun :-)! 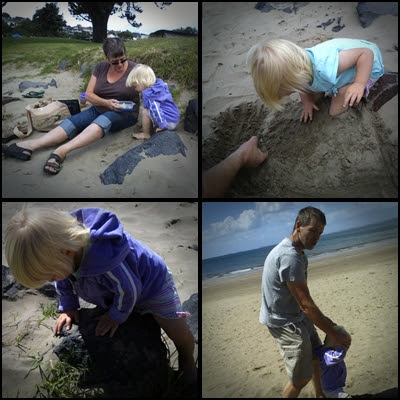 On Saturday we just popped over the bridge to 'Bin-Inn' in Browns Bay, turns out it is the closest to us ;-)! Mr.C wanted to buy some gluten-free flour and bits to attempt to start making his own bread... g-f bread is SO expensive (as is the cereal); that it is getting ridiculous trying to feed him within our budget!

Having never been there before (or at least not for a LONG time), we decided to have a wander round and stop for lunch on the beach, once the purchases were made!

Button had a great time at the beach as these photos show... she sat with Gran and had some lunch, she helped Daddy 'hide' her feet and legs in the sand, she climbed rocks and she paddled in the sea (no photos of this worth showing). It was a really lovely time, but unfortunately there was no sleep had from the toddler (had hoped she'd drop off on the way home), so it was a grumpy afternoon; never mind! 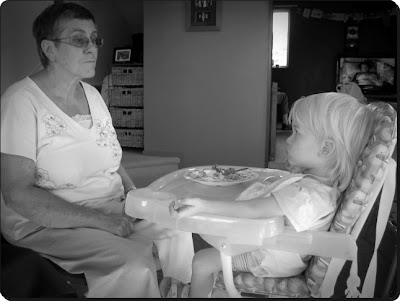 Gran has been getting in practice feeding and playing with Button (amoung other things), for when 'lil M arrives; as they'll be up for the first fortnight to help me out!

I got a series of lovely photos of the two of them grinning and playing as Gran fed a hungry Button... but this photo just takes the cake! By this stage Button was slowing down and had just 'shut her mouth'; but I always tell her 'two more mouthfuls' before I clean her up and let her down. So Gran was enforcing this rule with her, and they were having 'Silent Warfare' over this when I took the photo... you can see by the expressions on both their faces :-)! I just find this hilarious! In the end neither won, Gran couldn't get the final two mouthfuls in - but Mummy managed to get an extra five into Button!!! They were best friends again afterwards though, thankfully :-)! 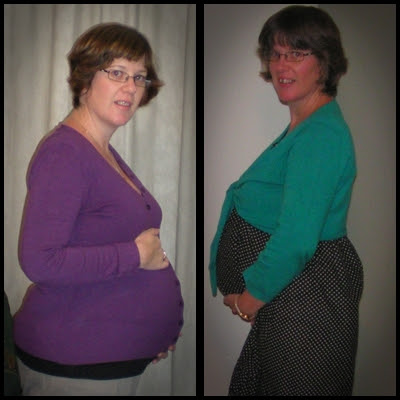 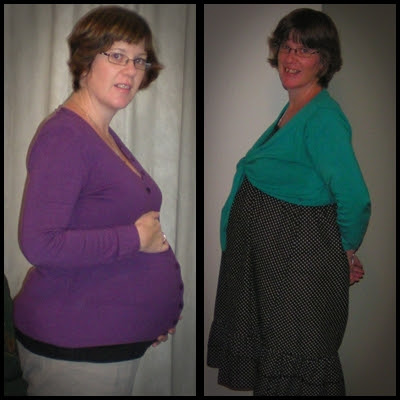 Starting to get that uncomfortable 'feeling like a beached whale' feeling again now... 6 weeks and 5 days to go (not that I am counting or anything *grin*)!!!!!

Ange (Tall, Short and Tiny) said…
Love that you spent a morning just playing with Button - it's so good for the soul, theirs and ours :)

Miriam said…
Sounds like some delightful memories are being made
28 February 2012 at 16:35

Amy said…
Haha, I just love the "stand off" photo - I can so imagine how it went. ;op
You look about the same size in the preggy photos now, but is that just the photo??
I should probably wrap the things we have for 'lil M (what does that stand for, by the way?) sometime soon, aye?
Amy
28 February 2012 at 20:32