February 10, 2012
So finally - I am sitting down and trying to catch up on this 'Documenting Delight'... now don't get me wrong, I have been taking photos regularly, and they have even been 'photoscaped' and ready to go for a while now (just had a couple of days to do right now, but other than that they have been sitting and waiting)! But I am trying to balance out my DD Posts with other more interesting posts, as I found it was getting a little one-sided (bit like my 'Things I Love' posts last year). But it has been a BUSY couple of weeks, and is only going to get busier - I can see that already!

So without further ado, here are the photos from the end of January: 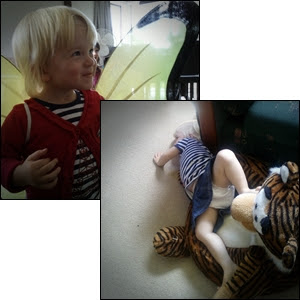 Top photo was Button dressed in Butterfly wings... we were visiting a friend; had been stuck inside for 2-3 days due to weather and other things, and both Button and I were getting cabin fever. I had text out an open invitation to meet people at the shops just for an outing, but  went visiting instead - Button fell asleep going over, but once she woke you can see she had a ball!

However, that was the only sleep she had (all of 20 minutes at about 10am), for some reason she would not settle once we got home - tried for 1.5 hours! In the end I got her up, and popped a DVD on and within moments she was lying across her tiger (I am so NOT tired Mum)! Unfortunately this didn't work either, so ended up taking her out in the car and getting another 30 minutes of sleep out of her this way! 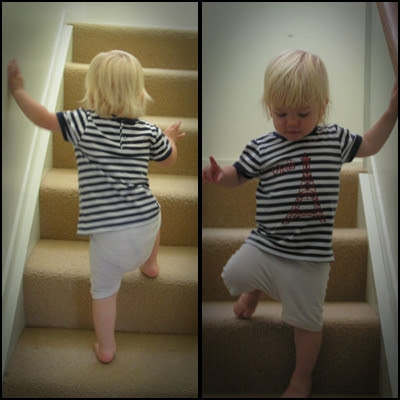 Little Miss Independence... climbing up and down without assistance these days :-)! And quite competently too I might add, has had one small fall and that has been it. 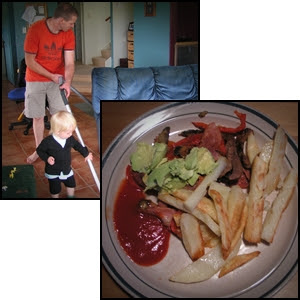 I love the top photo... Button is at the age where 'helping' is fun, so we do what we can to encourage this! Daddy got to have the 'fun' of having help with the vacuuming this time - I have had my turns at this, and it is not fun for the adult, in fact it is arduously slow! BUT worth it :-)!

The bottom photo doesn't look anything unfortunately, we were both very disappointed - but that was one of the scrummiest meals Mr.C has cooked, it was divine! He was very proud of himself, and I totally devoured it... but I guess you'll just have to believe me! 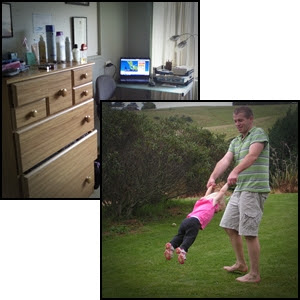 Top photo is showing off the beginning of the decluttering although I have to admit to have done no more since then :-(! Intentions are good, energy levels (especially in the current heat) are nil... so only necessary things are getting accomplished right now!

The bottom photo (and any/all like it) just makes my heart melt... I LOVE watching Mr.C and Button together, he is her biggest fan and protector, and just totally adores everything about her! We were talking with friends the other day and something came up about teenagers, and how they don't like being seen with their parents; Mr.C said he hopes he is a 'cool' Dad and Button never feels the need to 'ignore' him as he'd just miss her too much. Awwww - talk about leave me all jello and teary for a split second there... there is just something so precious about the Father/Daughter relationship.

Anonymous said…
Naaaaaw :) So cute how your hubby would "miss" Button if she was too cool for him. Hehe. Love the pics of them cleaning and playing together!
10 February 2012 at 23:16

kiwimeskreations said…
Love those photos - nah, she will never ignore him, even as a teen - you just have to move with them and change the way you relate as they change.
Blessings
M
11 February 2012 at 14:32