Today was Button's first day back at Playcentre... and what a different kid! I am SO proud of her, and all the changes and confidence she has gained over the summer - no more clinging to my leg, she was quite happy to go off exploring by herself and do her own thing (bottom photo proving this)! As long as she could either see me or hear me, she basically was happy to ignore me - makes Playcentre so much more enjoyable for me, as I feel I can finally start having conversations with the other Mum's, and making an effort to get to know them... it also means I can start helping with the clean-up more! She also is coping with the time these days, no more following her around with sandwiches, so she drops off to sleep with a full tummy on the way home - she stays awake in the car, and is happy to have lunch when we get home, and then head off to bed! Yay... I think I am going to have to write up a while post on the changes that have been happening in her recently; so amazing :-)! 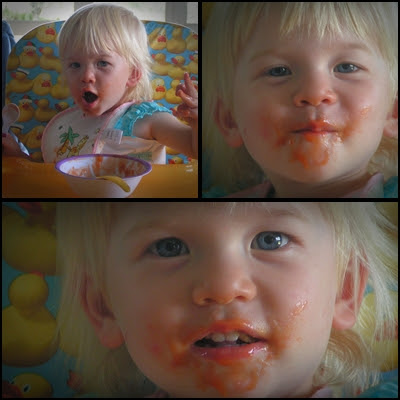 The 'I love Baked Beans almost as much as Spaghetti' face! 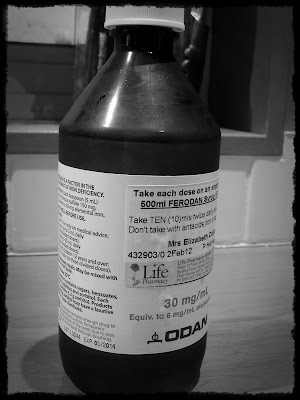 FINALLY - the cure to my fatigue... I hope!
Just had managed to conveniently forget about the side effects of iron until a few days later! 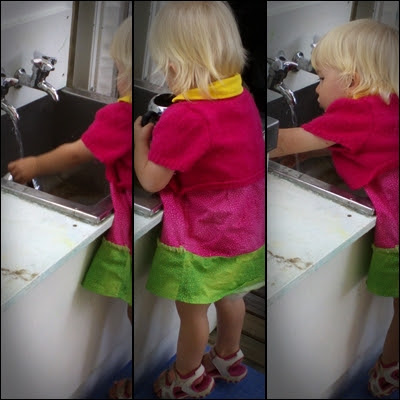 Second day back at Playcentre and Button discovered the taps, and waterplay... hasn't shown much interest in it until then, but now it is hard keeping her away from them! She must have spent a good 45-60 minutes just playing with the tap and a few different sized containers. 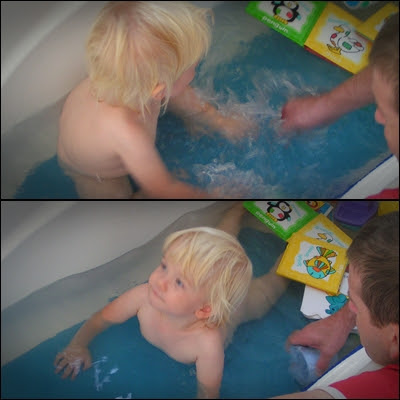 Fun in the bath with Daddy... top photo she was going mad with splashing; bottom - who knows ;-)! I have not yet worked out the best setting for bath photos, none of them came out exceptionally well unfortunately. 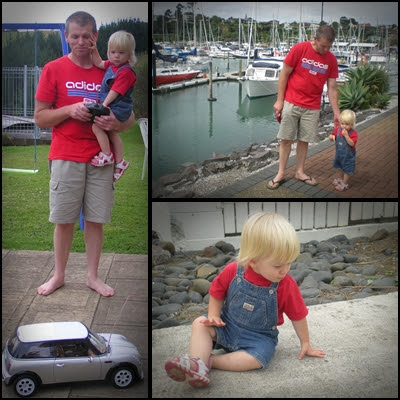 We had spent the Saturday at home of Waitangi Weekend, so Sunday afternoon decided we all needed to get out of the house for a while... So first off we went to the Lloyd Ellsmore Park for a while, but it got fuller and fuller of older children. Then we decided to pop down to Half Moon Bay Marina to look at the boats  (top right photo), on the way back to the car we spotted a trail of quite big ants - Button spent ages just watching them (bottom right photo), quite taken by it all!

The left hand photo was taken slightly earlier in the day (I think)... My Dad collects remote control (BIG) cars, but hasn't spent much time playing with them of late - so over Christmas, he decided to donate one to each of the Grandchildren (I think that still leaves him one at home, plus two helicopters). This is Mr.C and Button giving it the first go at home - for most of the time Button was down on the ground chasing it and giggling, but I didn't manage to get the camera out until Daddy had hit her in the shins hard enough to make her lose her confidence! So the rest of the time was spent in the safety of Daddy's arms - I'm not sure where he got his license from ;-)! POPPA = this is for you :-)!

Me and 'lil M at 30 weeks :-)!
For a comparison with Button's pregnancy, you can pop into here!

Hope this finds you still awake ;-)!

kiwimeskreations said…
Great photos and narrative :-) I love being able to keep up with your world like this.
Blessings
M
P.S. Poppa read his bit :-)
11 February 2012 at 18:09

Amy said…
Love the tip-toeing at the tap. Very cute!
Bath photos sometimes get steamed lenses, I find it really hard to get good ones too.
I hope the iron is helping with the fatigue levels!
12 February 2012 at 15:43