I thought I'd do one more update on the stomach... it is GROWING! (If I am still intact on my due date - I promise to post a comparison photo then also though)!

Please excuse the quality of the photos; hubby is not a photographer ;-)! However, it still at least manages to give you an idea of the size... and here is the 37 week comparison with Button: 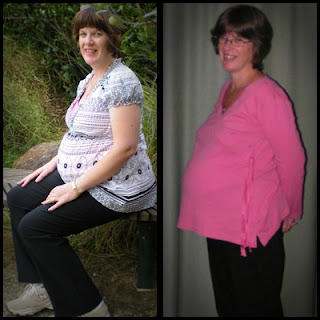 Difficult to tell though, due to sitting in the first photo... but I look huge in both photos; so I guess I am just plain huge *grin*!!!!

I am now getting the pelvic pain at night, back ache during the day and constant exhaustion! I just keep telling myself that there isn't long to go now... I am starting to get really excited about meeting him; hubby has been anxious to meet him from the start - I have been happy to give him the chance to grow (guess that is partially because I 'feel' him every single day anyway). The thought of two children still frightens me, but I keep telling myself millions of woman have done it before me - so I can also, and it's almost working ;-)!

He is currently moving and making his presence felt - it is a lovely feeling; who can explain it or describe it? Hubby wishes he could feel it also - but he just has to deal with the little movements from the outside (he is so big now that the really big intense movements don't happen as much now). Sometimes I would describe moments like this as 'safe'; he is safe - I know he is okay because he is moving, and while he is still in me he is safe; I can keep him safe. Button now is having to face life head-on; she is still young enough that we can keep her reasonably safe as well - but not 100% like I can with 'lil M currently. She is having to deal with disappointments, fear, anger and the other many emotions that come and go for toddlers... 'lil M is JUST dealing with less room and contentment! But he does miss out on cuddles and kisses, parents who dote on him and a big sister who already seems to be quite maternal, and I am sure will be protective and loving.

I have fallen down the stairs twice in the past weekend - bottom two stairs only, so no damage done (bruised knees and a sore ankle)... oh, but the pride! I must have looked like a beached whale - I couldn't get myself up, had to rely on hubby; and I gave him such a huge fright, esp. the second time. I have now got very strict instructions on how I am to walk down the stairs, how much I am to do during the day (NOTHING), and he rings up and checks up on me regularly! Very sweet... very frustrating!

Melissa said…
I know what you mean about being a little worried about having 2 children. When I was pregnant with Sawyer I saw a woman in the store who had 3 children (one a newborn) with her and she seemed to be handling them all really well. I thought about just following her around the store to see how this was done. Now I realize that under the 'confident look' she was probably wondering what in the world she was doing there with 3 kids and hoping to get out of there before one of them cried.
28 March 2012 at 06:58

Ange (Tall, Short and Tiny) said…
I think you look great :)
Yep, definitely know how you're feeling about suddenly having 2 children! It'll be a big adjustment, for everyone, but like you say, other women survive it, and you will too.
Eeeeeek, your next post might be introducing your son!!!
28 March 2012 at 08:38

kiwimeskreations said…
You will cope - and probably far better than you ever will have imagined :-).
And yes, we cannot protect our children from everything, much as we may want to!
Blessings
M
28 March 2012 at 09:59