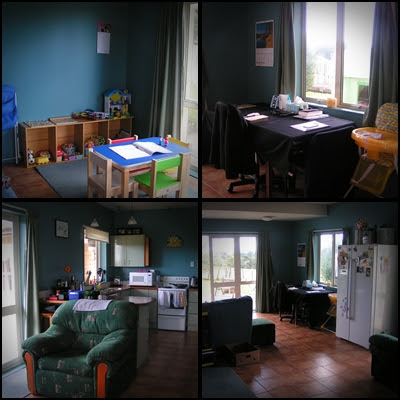 Today was all about hard work... decluttering the dining/living room, and my bookshelves! So there has been yet another rearrange in the living area as the photos above show (my Dad says I take after my Nana - said they never knew what the house would look like by the time they got home from school). Hubby says the same - he doesn't even bat an eyelid when he gets home and things have been changed AGAIN! Button also takes it all in her stride, and never seems to worry - thankfully! I did pre-warn Hubby this time though, so he knew it was coming (and even helped me a bit, as well as putting his foot down to a few of the changes I had initially wanted *sigh*)!

Grrr - Button has just woken up, yesterday she gave me 2 hours 20, today it has been slightly over the hour... never mind. Be back tonight IF I'm lucky!

Nope... never made it back yesterday; hopefully I'll get a longer sleep out of her today and manage to finish this post!

Anyway - I love the new look, much more space! The main thing that bugs me is the green chair... I want the blue couch upstairs and out of the way (don't like it much, and it takes up far too much room), and the green chair in the couch space; leaving that doorway free. But hubby likes the couch, not that he uses it much himself; but we do use it often when visitors come with kids (or rellies who want to spend time with Button)!

Below is the new bookshelf look - again, no pre-photo as that would be totally embarrassing (although I can guess if you looked back enough in my blog you'd come across one - but not even I would make that effort *grin*). LOVING the new look, it actually looks like a bookshelf is supposed to now - the overflow has been soaked up with the bookshelves in the spare room: 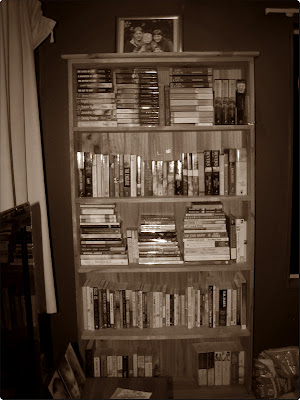 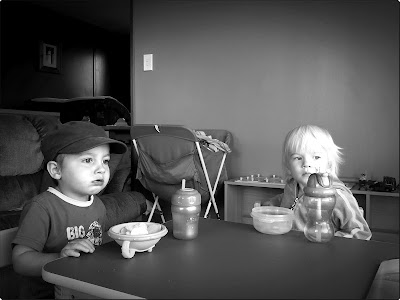 Mummy had an appointment, so Button and I made sure Luke was fed and happy (most of the time)! I couldn't get a better photo of them together unfortunately - there was always one of them running away in every other photo; so I guessed I'd never get them both looking at the camera at the same time and gave up when I finally managed to snap this one! 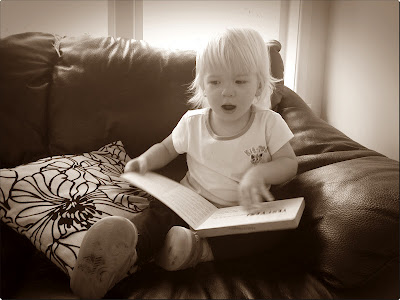 Button has just started 'reading' aloud to herself, she has sat for months flicking through the books - but you'd never head her, but every now and then these days she will 'read' outloud to herself. It is the cutest thing, and I managed to snap her doing this at Playcentre... would have loved a video of it, but it was pack-up time - so a quick photo over the shoulder was all I managed to get! 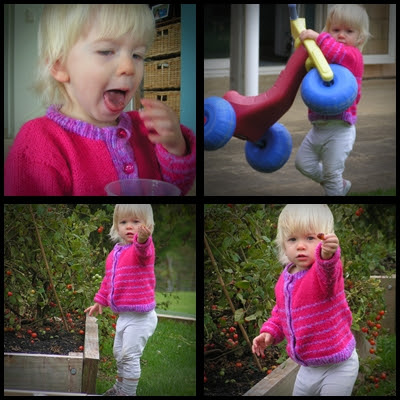 I went a bit mad with the camera today - taking loads of photos... these were some of the better ones!

1) Button was eating a grape and had a big pip in her mouth which she did not appreciate... this is her trying to dislodge it!

3) 'Mum - is this tomato good enough to eat?'; we have been allowed to help ourselves to the neighbours cherry tomatoes, and have tried to teach her to check with us before putting them in her mouth... as much as she knows only to pick the red ones, she can still pick up rather gross looking ones and attempt to eat them!!!!! 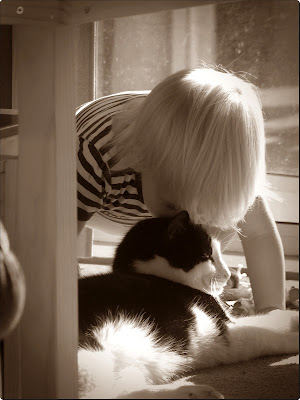 Most of the time we try to encourage Button to be 'nice' to the cat... but every now and then if we want some peace, we'll encourage her to go and 'play' with the cat (seriously, she is obsessed with Pixel)! This was one of those moments - we were trying to have a cuppa and a quick catch up chat, but she just wouldn't leave us alone - so Daddy suggested she 'played with Pixel'! First all then plastic animals came out and were shared, but when there was very little interest shown - the books came out, and she read to her for a few minutes. Next thing she was smooching the cat - she just can't help herself, and had to sneak in a few cuddles! Thankfully the cat is very patient... it was cute though, and totally distracted us (which meant it didn't do the job we'd planned for it to do anyway)! 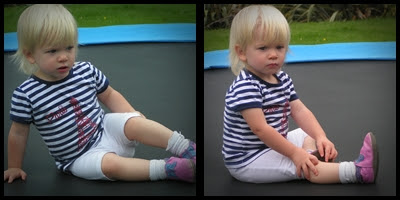 A rather pensive looking Button! 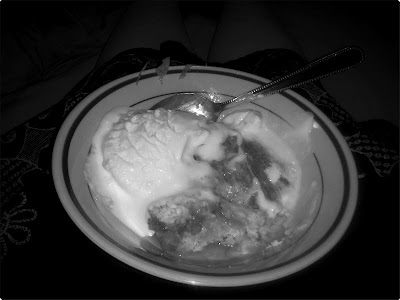 Well, there she goes - right on time... will just have time to post it before having to rescue one small toddler from her cot! No time to double-check though, so please excuse any typos!

Neetz said…
hahah... isn't it lovely to see kids loving on their animals? our kids have always grown up with dogs/cats/ponies/chooks and 3 goats! :) It's even better when your animals are nice and cruisey and not all nasty/scratchy! :)
21 March 2012 at 20:25

Amy said…
Some gorgeous photos in this post, Elizabeth!
The lighting in the cat and girl photo is just lovely (and I can imagine the distraction they were causing!).
The reading photo I swear I can almost hear her talking, so great!
Those tomatoes do look yummy. I've given up trying to get Munchkin to check with us before eating - he is one sneaky boy sometimes!
Amy
29 March 2012 at 19:47