March 28, 2012
After my post the other day 'Just Thinking', I had a friend write to me personally about how she worries over her daughters weight due to various reasons... 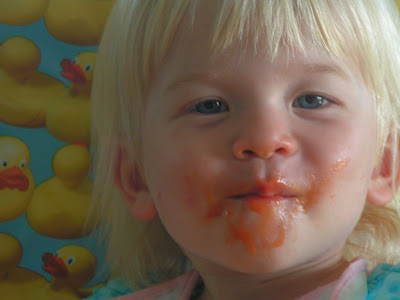 It was interesting that she should mention that as it had been on my mind with Button of recent weeks also. See I have this paranoia about her waking at night hungry - I am not sure why; it is just 'one of those things'! I think it dated back to our family getting a violent tummy bug when she was only 10 months old, and after so long with her sleeping through the night - she didn't eat for ten days and I was getting up to her 2-3 times a night to feed her (was still breast feeding back then). It then continued on for a couple of months afterwards due to teething and colds and other such dramas - in the end we had to wean her off over a few nights, and get her back into sleeping right through. But at the time it totally exhausted me, and I started feeling very resentful; and since then have dreaded the thought that she might do this to me again (getting up at night for various other reasons doesn't bother me the same at all).

Anyway - I tend to let her self-regulate her breakfast & lunch generally (a little encouragement is required here and there still), and she snacks on and off during the rest of the day... But at dinner I turn into the 'Wicked Witch of the West' towards her; and tend to 'encourage' her to eat her entire plate full - I am sure there were times she was eating a bigger meal than me. If she had a night where she didn't eat as much as I wanted, I'd have a tantrum like a little child; seriously! It was pathetic, and hubby was really starting to pull me up for my behaviour, and was asking me to minimise her meals 'as she only has a little tummy remember'; apparently she often looked as pregnant as me by the time he got her into the bath - she was THAT full.

Three nights ago she had a melt-down and wouldn't eat much, didn't like it or something - not really sure. Half way through dinner she'd asked for Daddy to feed her, so he took over; but then she wanted me again and refused to settle (hubby wouldn't give in to the second demand and neither would I, as I was finally sitting down eating my own dinner). And guess what - she slept through to 6:15am; earlier than usual admittedly, but still better than the 4am I had been imagining! Then last night we had another melt-down at dinner time (different reason, can't remember why now)... and this time she ate less AND I had to wake her at 7:20am so we could get to Playcentre on time (sort of). So my theory of waking early due to hunger went right out that door...

Tonight - tonight was good... it was as it should be! She ate most of her dinner, let me know when she was full and there was no melt-down from either of us. YUS - I think we have both got there now; Button knows her limits, and Mummy is learning to respect them! I know there'll be times where I'll have to encourage her to eat a little more, or say no to something she is asking for; but if we can set up an environment where the children eat as much as they NEED (rather than 'everything on their plate' like I and many others were brought up with), hopefully we can raise healthier children in the long run. That is hubby's goal anyway... he has been trying to teach me this also, as it is entrenched in me to eat everything off my plate. It can cause some serious discomfort if my eyes were bigger than my tummy that night, but the guilt associated with throwing food away... ahhhhh!!!! But I am slowly learning as well ;-)!

Now onto a slightly different, and definitely more positive note... we think Button has (or is) out-growing her dairy and egg allergies! Wahoo - SO excited!!!!!! Hubby has been very naughty and sneaking dairy into her for the past few weeks, and then telling me afterwards; I am much more reluctant, and had planned on waiting until she was two and then having her retested before I tried her on anything. But she has been having little bits of yoghurt, milk, chocolate and whatever else hubby has managed to sneak into her - and other than tasty cheese, she certainly seems to have enjoyed these dairy-treats! The other day he gave her probably about 1/2-2/3 of a tub of yoghurt (in front of me this time), and other than a few spots around one side of her mouth - there was no reaction whatsoever! A few months ago this would have not only caused a rash right across her face and down her neck, but also probably had her vomiting it back up... the following night he gave her a couple of mouthfuls of fried egg - you'd have never known the difference, she was just as crazy as ever after dinner!!!!!

We are thrilled, yay... an almost 'normal' house for a few weeks! That is until 'lil M arrives, and with him the possibility of going through it all again; guess only time will tell though (and if he HAS reflux and allergies - we'll survive it, just like we survived with Button).

Ange (Tall, Short and Tiny) said…
Yup! Been there...loads of times...then remembered sage advice from other parents: "Pick your battles!" and the pros: "A toddler will never let themselves starve." If I don't eat enough, I wake hungry in the night, but so far, the same doesn't ring true for Tiny...you're so right, we have to trust that they know their limits, and then respect them.
Gorgeous photo, too xx
29 March 2012 at 08:20

kiwimeskreations said…
Hmmm - yup - always figured that a kid would never starve themselves... guess you got the 'clean plate applause' and it stemmed from that...
Blessings
M
29 March 2012 at 12:07

meg said…
i can totally empathize - I used to pile my kids' dinner plates high & get so frustrated at the battles that ensued. it wasn't til my ma-in-law came & stayed & i saw the tiny amount she put on their dinner plates - which of course they cleaned up in no time that i dramatically reduced the amount i was giving them . . . & we were all happy! when we were little it was 'eat what you're given' so i guess maybe it stems from there.
3 April 2012 at 07:04

meg said…
arghh . . . i commented but it didn't work so i'll try again. i did exactly the same with my two & it wasn't until my ma-in-law came & stayed & served them tiny portions which of course they cleaned up completely - that i reduced their portions & had no more meal time battles. we were brought up with 'eat what you're given' so i guess it comes from there!
3 April 2012 at 07:09