May 15, 2012
'lil M is now almost 5 weeks old - seems quite surreal still really! Other than the extra sleep, I can't remember life without him; and yet these past (almost) 5 weeks have flown by, and we can't believe he has been around this long already! 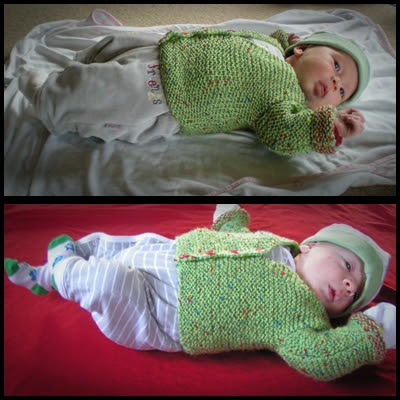 Button was more alert, and was awake for many more hours each day by this stage - mainly because of her health issues though, not something we would wish on her or anyone else. I am quite enjoying my sleepy babe, and can't get my head around that this is actually 'normal' behaviour ;-)! He is exhibiting a few similiar traits to Button, but not enough for me to be worried about; and my midwife assures me that the signs he is showing is actually very normal new-born stuff, and not necessarily reflux-related; whew!

I was watching Campbell Live tonight and they had 'The Baby Whisperer' on, and she was spending time with Carly Flynn and her gorgeous 11 week old son Jude; who seemed to be having all the same problems that Button had. It took me back those two years instantly, had me crying quietly into my sleeve (didn't want hubby to see, he thinks I 'should be over it by now')! I could relate so much to her descriptions of Jude and his behaviour, but also her comments about how Tilly (her eldest) was watching 'The Wiggles' over and over again while she had to spend time settling Jude... that is SO us right now also! She cringed and commented 'Bad, bad Mummy' after laughing about that, but I saw tears in her eyes - the guilt that you can't give your first that time you'd like to, even when you have a 'normal' new-born (let alone a 'challenging' one) is all-powerful and all-gripping some days. My poor girl is seeing the raw end of both of us currently, even hubby is starting to react to her more than normal (bubs is still sleeping in our room, so while hubby isn't getting up during the night like I am, he is still getting disturbed nights). The guilt when you realise you have over-reacted YET AGAIN can almost send you back into PND and those dark days... almost! Praise God I have not succumbed to it this time, there have been some hard days - but nothing I haven't managed to survive so far; hubby has had very few 'You have to come home right now' phonecalls, in fact I can say he hasn't had ANY of those ones...although he has had a couple of 'You'd better not be late home tonight, or I won't be responsible for my behaviour' ones!

I really am not getting much time to blog, when I am getting a bit of down-time I am generally too tired to string two words together - let alone an entire blog-post, nor do I have the time to write a post and publish it! I almost didn't write this one up either, as 'lil M was groaning in his sleep about how hungry he is... however, I am pleased I have attempted it, as he has since settled back down and gone to sleep; wahoo!

Hubby thinks I should be doing the same now... so goodnight!

Anonymous said…
I can really identify with your post! And the 'should be over it'...I'm not sure you do for a long long time. I didn't have the problems that you did with your first, but I still react when I hear/see a fussy newborn. That "I have to do something for this baby but I don't know what" feeling comes rushing back. And then the relief that it's okay - it's not my baby. It makes me teary eyed just thinking about it.
And I'm so glad your little one doesn't have reflux and is sleeping better!
Melissa
16 May 2012 at 00:30

Sammy said…
You are doing so well! Not that "doing well" is what you SHOULD be doing. I am trying to say that you are an awesome, loving, committed mother and your children are totally blessed to have you!!
16 May 2012 at 13:17

kiwimeskreations said…
Hey - Button is so secure she will not worry about some more 'Wiggles time' - you survived our #2's arrival unscathed (I think) and I am sure she will. :-) You're doing fine! Blam,e any tears on the hormones {BTW we are always hormonal;-)}
Blessings
M
16 May 2012 at 14:26

Ange (Tall, Short and Tiny) said…
You have put into words what is on my mind at the moment, and #2 isn't even here yet!
But it also sounds just like the conversations I have had with every friend who has a toddler and a newborn, so what you're feeling sounds perfectly normal to me.
It's still early days and you're all adjusting, and it sounds like you're doing an awesome job.
(I have my fingers crossed for you that L'il M is going to escape reflux - but if he doesn't, you know you survived it first time around, and can do it again) xx
20 May 2012 at 09:17