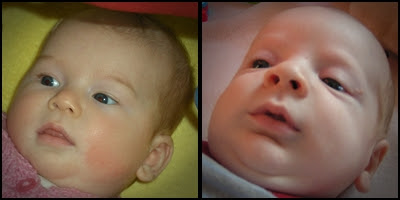 Unfortunately I didn't quite get them at the same angle, which makes lil' M look like he has serious chin issues going on, but I'm pretty sure Button had the same thing at that age ;-)!

Both approx. 10 weeks; I know lil' M was in this photo, but am guessing regarding Button... if she wasn't 10 weeks there - she wasn't far off it!

They're looking quite different now - even to the most untrained eye... me and hubby always thought they looked totally different; but in some of the new-born photos you could have been mistaken if you'd assumed they were one and the same baby.

Main physical differences:
- Button had a lot more hair
- Button had eye brows & dark eye lashes (lil' M has them, but they are fair and barely noticeable)
- lil' M has a bigger mouth
- Both have wide foreheads, but Buttons seems flatter in these photos... not sure if that is true, might just be the angle!
- Button has a slightly darker complexion, even now though her hair is white blonde - she doesn't have that fair skin that burns as soon as the sun hits it (I do, and I fear lil' M might have it also)...

Both have the same little ears, same little button nose, and same wide-set blue eyes; that grow larger than life when given a fright!

Button was a quiet and quite a serious baby (still can be now), she looked around and took people in before she'd let anyone hold her; and didn't smile unless you deserved it! Quite a reserved little body... (I realise that even more so now, with having a baby the complete opposite). I don't know how much of this is just related to personality, and how much of it goes back to her health issues when she was small; and how well I did/didn't cope with them and her. But even now she takes time to warm up to new people and new situations, and has it all sussed before she'll relax... she is very clever, and picks up things quickly and easily; and knows far more than we give her credit for! I have to prep her before taking her into new situations, and before we make big changes; even before visitors arrive (especially those with kids *grin*, she is at the age where sharing doesn't come naturally). But once you've made it into the 'Inner Sanctum', she is loyal through and through; and you'll have a friend for life! She is stubborn like her father, and has his sense of humour (God give me grace), but is a 'Mummys Girl' still...

I am loving watching lil' M grow, and seeing little personality traits show up as he gets older... somehow though, I don't think his placid exterior means he is going to be a walk-over! The other night we were trying to get him down for a sleep, and at the same time we were taking Button through her bed-time routine - so we were both juggling them between us. I had finally managed to get him to settle, and came downstairs to start getting Button ready when he woke again; grrrr, a regular issue at the moment. Hubby went to deal with him while I brushed Button's teeth, read her a story and got her into bed... lil' M still wasn't settled when hubby came down to kiss her goodnight, so he brought him down for Button to kiss goodnight as well. As they headed back up the stairs to his room he totally lost the plot, so hubby brought him back down wondering what on earth was wrong - he settled down again instantly. It was a case of 'I don't want to go to bed, thank you very much'; life could get interesting as he gets older and realises he has a will of his own!

So until next time,

Amy said…
It is so cool getting to 'see' Lil M and Button like this, how similar and different they are in different areas.
Gutted we haven't seen him in person yet!
Amy
29 June 2012 at 19:37