My little girl is growing up: 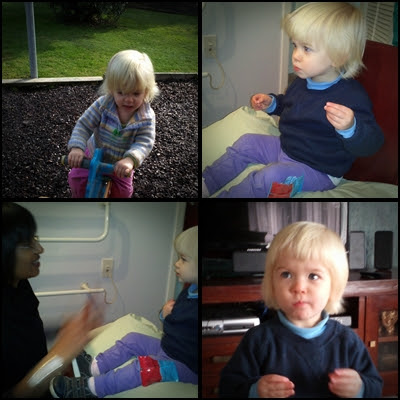 2nd ever haircut and she was perfection!

We did talk about this, and explain that Mummy and Button were going to go and get their haircut this morning... I asked her if she remembered getting it cut last time, and she said she did. I wasn't sure if she understood what I meant - turns out she did understand, AND she had obviously remembered, behaving accordingly! So very proud of her - just sat there or stood there obediently as required, and was awesome!

You can see just how much she needed it - poor baby has had her hair in her eyes for a long time... I hate my hair in my eyes, and I am sure it was bugging her also. Next time we won't wait so long between appointments! 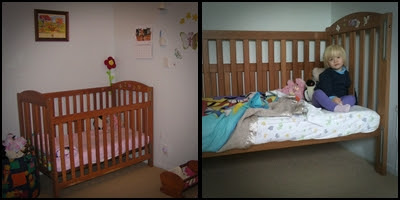 The side of her cot also came off... again, we'd been talking about it for a couple of weeks, and she'd kept asking me 'Side off Mummy?'; but I kept putting it off and saying 'Soon honey'! Then on Wednesday she climbed on top of her cot, falling over the side - thankfully she didn't hurt herself, and she has only ever attempted climbing over during the day; no midnight crashes or anything scary like that! But that brought my 'Soon honey', a little sooner than I am comfortable with... not yet ready for her to be grown up enough to be in a 'Big Girls Bed' (well cot in this instance). It also means another expense of bed and bedding - we already have one set of flannelette sheets and a feather duvet in preparation, but need a bit more linen yet; plus the actual furniture ;-)! Talking about it today though, and we think we'll get a proper bedroom set for her when we get around to purchasing her bed - they're not overly expensive these days, and she'll use it for years to come (but that won't be until the credit card has been paid *grin*, hopefully the novelty of the cot side off will last for a while to come...)!

And the novelty was certainly high today - there was NO day time sleep whatsoever; although she was very good and just played quietly in her room for over an hour before making it clear she wanted out. I would have never known she hadn't slept she was so quiet, if we hadn't popped down and listened at her doorway a few times! It was partly our fault as well though, her lunch is generally 12-12:30pm, and bedtime at 1pm... but due to the haircuts, we never left our friends place until just before 2pm - getting home just before 2:30pm. So she went down over-tired as it was, and I only stayed with her for ten or so minutes as well, as the baby needed feeding!

Tonight she was in bed just after 6pm (a whole hour earlier than usual), I stayed with her until just after 6:30pm and I know she was asleep before 7pm as I went down and checked on her! Yay! Exhaustion was our friend...

We just heard a grizzle from her room about ten minutes ago (9pm), and went and checked on her - she was not in her bed; but it was obvious she hadn't fallen out either. We have a mattress on the floor beside her bed, in case she falls out - but instead of being length ways on the mattress; she was width ways and half on / half off. Like she'd been playing, but was so tired she'd just dropped where she was and had fallen asleep there! Didn't look like anything in her room had been disturbed though (I'd cleaned it up on purpose while she was in the bath, to see if she got up and played with stuff before going to sleep - sneaky Mummy)!, so we just popped her back up onto her bed and snuck back out, she slept through it all!

It could be a long night though, she has just roused again... God give me patience!

Amy said…
Wow, big girl with the cot side off! Very cool! I hope it is going well for you all and Button is settling well without her imposed containment...we have a bed for Munchkin on our 'list' for this year too.
3 July 2012 at 19:32