July 07, 2012
I had thought we weren't going to have enough clothing for 'lil M when he was born, so popped down a few weeks previously and bought a few things... My brother and sis-in-law sent a few things up for us to borrow, and a friend from church also lent us a few things.

But then clothes kept arriving... and arriving... and arriving. We had a friend who had a friend who had boys (our mutual friend doesn't) and was going through her boys clothes; so we got blessed with a HUGE bag of those. Hubby's workmate has two boys, and they have been giving us stuff left, right and centre since Button was born - big things, like cots and baths and bassinetts and boucinettes and... well you get the picture! We have been able to bless others along the way also, as some of the things they have passed on we already had. But the clothes - we have kept most of, so 'lil M has clothes from newborn right through to two years old now!

We won't be having to buy much for him for a LONG while: 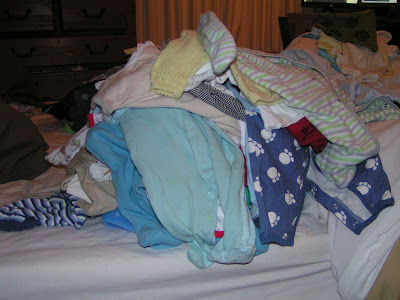 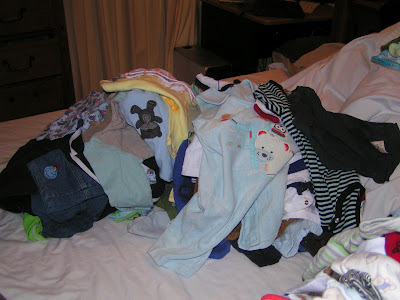 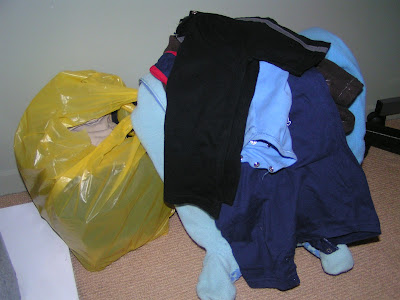 Thankfully for us, we have average to small size children - so they tend to fit everything we're given... at least for a while! Admittedly, 'lil M has grown quickly, and is already bigger than his sister was at the same age (despite being born nearly a pound lighter)! BUT, he is still fairly average for a boy!

Amy said…
Hahaha, that is SO good, very pleased for you guys to have an abundance of clothes - it is so handy! Does that mean you don't want the rest of Munchkin's to borrow? Just let us know...we can always send specific things to 'fill your gaps' if you like. Big grin!
10 July 2012 at 17:56