July 10, 2012
Loads of blog posts lately - but the main thing in common? Loads of photos, and not much writing... trying to keep the momentum going, despite the tired worn-out brain! So this is the quickest and easiest way of doing it - small, photo-heavy posts; which are quick to write and easy to share! I do have a couple of longer, wordier and more 'real' posts swirling around in my head; but that's about where they have stayed so far... one day I'll start them, and then one day I'll get them finished and posted for you; but until then you'll just have to enjoy the photo expose of my life ;-)!

This post is about friendship - a family friendship, we met a lovely couple at our church a year or so after we started there; Alex & Victoria (names used with permission), we weren't exceptionally close, but we all got on well. Victoria found out she was pregnant just a few weeks before I found out, so we went through the first few months of pregnancy together: 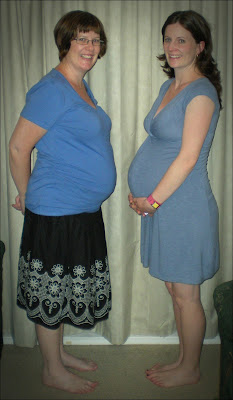 Then at the beginning of 2010 a job opportunity came up in Victoria's home town, and they took it and moved... it was sad to see them go, as I had hoped our kids would grow up together (at least in those first few years)!

In the March Victoria had their son James (on his due date no less), and then right at the beginning of May (a week late) - Button arrived, so in the end there is exactly 9 weeks between them.

Alex being a teacher, means that they often get up during the holidays, as his family still live here... and we all then get a chance to say a quick hello and ohh and ahhh over how much James has grown!

In July 2010 they popped over to see us and meet Button for the first time: 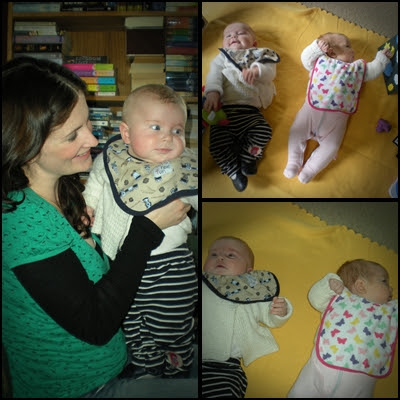 Here James is 18 weeks and Button is 9 weeks.

While we have seen them since then (obviously) it has only ever been briefly, but last week we managed to spend a whole evening with them and the kids got reacquainted again! It was SO lovely - Button had not slept all day that day (one of the first ever times), she'd been in her room for two hours before I finally gave up and let her out, but James (who doesn't always sleep now), had given them a 2.5 hour sleep - in fact they'd had to wake him up!

They both took a while to warm up, but by dinner time they were talking and playing alongside each other... and then after dinner the fun started - loads of squealing and playing together, it was so much fun to watch. Button doesn't yet 'play' with other children well, she'll watch or play alongside - but not interact specifically in the form of play, and yet that night they really properly played together! James was quite taken by her, and when we sat them down for a DVD so we could eat in peace - he tried sitting next to her, but she moved away (poor James); it was really cute!

So here they are as toddlers together: 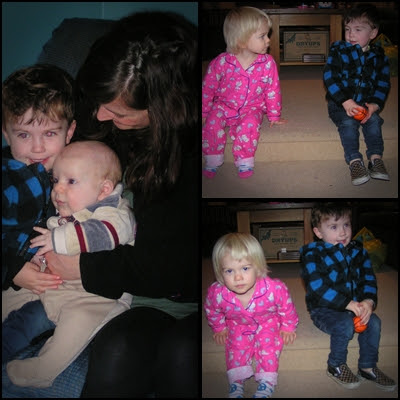 James was also really taken with 'lil M, and wanted to cuddle and kiss him heaps... it was SO sweet!

Here's to many more years of friendship and playmates!

kiwimeskreations said…
Nice one :-) I don't mind the photo heavy posts - but then I am slightly biased!! Isn't it wonderful to see the children growing up and learning.
Blessings
M
10 July 2012 at 14:28