August 08, 2012
We are hitting those toddler years FAST and THICK here in Button-land... there are big girls beds, sleep-times fast becoming a thing of the past (although NOT rest-times), tantrums, changes of mind every few seconds, teasing / joking, talking up a storm, pretending to be shy (she isn't - although she does tend to be on the quiet-side and takes a while to warm up and relax with new people), the word 'NO' is heard every few seconds, eating like a crazy starved person one second and then refusing food the next - and so the list goes on.

BUT - I think the biggest problem for us has been her issues with constipation... she just can't seem to get herself sorted out. Initially we thought it was her diet, but that didn't make much sense - yes, I'd got a bit lazy since the baby had been born; but no real excessive changes in her diet had taken place. In the end the Doctor thinks it has become an anxiety thing for her - she is holding on because it hurts to go, but of course the longer she holds on the more it hurts also. But how do you explain that to a toddler ;-)!

After a fairly long discussion with the Doctor yesterday - it has been decided we need to keep going the way we are: loads of kiwifruit (and other fresh fruit also obviously) and dried fruit in her diet, she is taking probiotics everyday (just started this though), she is on 5ml of lactulose 2x a day, we have spirulina powder to make into thick shakes for her also (will boost her immunity and hopefully minimise the chance of having constant colds and sore throats the rest of winter), and the latest addition to this is: 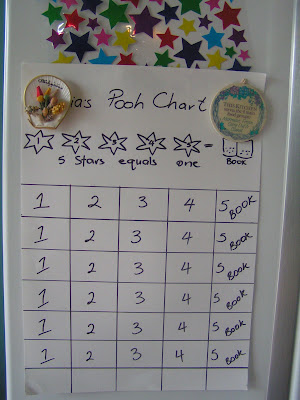 THE POOH CHART
Please excuse my stars, I have never (and still do not) claim to be an artist!

Five stars (e.g. five poohs) and she gets a book!

Yep - apparently reward / star charts also help in the motivation of passing waste! We have also decided to start using this time to begin the whole 'toilet training', but I am in two minds as to whether this is wise or not...

But if this doesn't work... then I am at a loss. It is really starting to worry me - not only physically what this could be doing to her little system (I don't know what the long-term impact of months of constipation does to ones bowels and intestines), but also what it is doing to her little mind. Her Dad has struggled with anxiety over the years, and is still on meds for it - I'd hate to think she already is prone to anxiousness and worry.

I could do with some advice here please... has anyone else had a toddler who has struggled with this for a LONG time (it feels like a long time, but it probably has only been about 3-4 months). What did you do to get it sorted? What worked / didn't work for you? How long did it take before your little one came right?

I even second-guess every conversation I have with her about pooh - in case it can be taken the wrong way in a little girls head, and cause more fear! For example - I always pray with her before she goes to sleep (day and night), and ever since she has started getting constipation I have prayed for healing for her bowels... obviously she has been thinking about this a bit, and recently has started saying 'No bowels Mummy, no bowels' - or so I thought that was what she was saying. The other night I asked her what she meant and she said 'No ding-dong bells Mummy' (how clever is that), so all this time she thought I was praying for healing for her 'Ding-Dong Bells', of which she has none; hehehe! That made me giggle... so I then tried to explain to her that it wasn't bells, but her tummy and bottom I was praying for. She nodded her head very seriously then, like she understood; but then last night we had a LONG conversation about it, as it had obviously been playing on her mind again... I still don't know what she does and doesn't understand, but anyway - hopefully she is now clear that she doesn't have any 'Ding-Dong Bells' inside of her :-)!!!!!

Sheesh, it's becoming a big mountain, rather than the little mole-hill it used to be!

PS - While I am on the subject of asking for help and advice... my poor 'lil M is onto his fourth cold in ten weeks, and once more I don't know what to do. We live in a warm, dry house; he is always dressed well and sleeps in a warm room... he is almost four months and is still exclusively breastfed. Maybe there is something I can be taking / eating that may help him? Just be aware that I can't eat dairy, he appears to have an allergy to it... I am also on a very limited diet in general, due to his wind and colic. BUT we think he is growing out of it now, and from four months (that is NEXT WEEK, wahoo), I am going to slowly start reintroducing things into my diet again and see how he goes. Maybe that will help, as I haven't been able to eat a lot of veggies, or citrus fruit, tomatoes - anything that can even remotely be a possible cause for wind/colic; Button was like this also *sigh*! Thankfully, he doesn't seem as bad; so I am hoping the worst is over now (he is even off infacol without too many hassles)!

* Edit:
Yay - the 'Pooh Chart' is already working it's magic... one star placed on it this afternoon, plus decorations - hehehe (and no sign of impaction - so obviously an anxiety thing). Not sure though, if it really was the 'Pooh Chart' working or whether she just had to go; but either way, what a relief (for us all *grin*)! 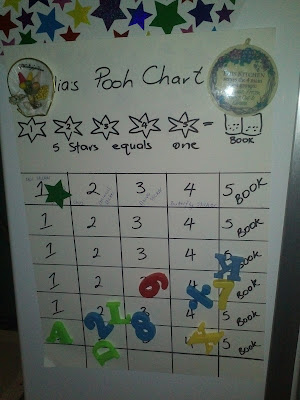 Cat said…
My lil Mr REFUSED to pooh in the toilet for ages and waited GGRRRR till his bedtime nappy went on !! !!
Reward chart worked for us
8 August 2012 at 16:33

kiwimeskreations said…
Try praying that her pooh medicine will work, making her poohs soft so they won't hurt her bottom. Keep it simple.
Can you take spirulina to boost your immunity and therefore Lil'M's?
Love and blessings
M
8 August 2012 at 16:33