September 16, 2012
I have decided to instill a new weekly catch-up of sorts... I am so NOT good with blogging at the moment; just because of where I/we are at family-wise (and lack of sleep-wise *grin*)! But I still need to be a little more regular than what I have been - so I am starting a whole new 'just me' weekly post ('just me' meaning it is not one of those weekly linky party things *grin*)!!!

So the idea being that I will brief you on my week through bullet points... add photos where appropriate, and if I have time I may even enlarge on a point or two! If not, well at last it's out there (and maybe at a later stage, enlarge on a bullet point or two - but don't count on it)!

* I LOVE Thursdays! I have started meeting some friends semi-regularly on a Thursday evening down at the shops for a coffee or three! We are all busy Mums and generally have a list of small jobs to complete before we all meet; but there is ALWAYS time for a coffee and chat... it's becoming my favourite evening!

* We have finally started to get 'lil M into some good evening routines, and generally he is down for the count between 7-8pm (normally sooner rather than later). Except tonight of course, where it was more like 8:45pm; hence the later post)!

* My two year old has just started the 'Terrible Twos'; and it's serious! I had thought we may miss the worst of it and I have to admit to have been laughing up my sleeve at a few tantruming toddlers I had seen - but I swear she has left the worst till last... Yep, pride comes before a fall my friends; and we have fallen hard on our faces; learn from my mistakes!

* Friday was the worst afternoon E.V.E.R... Thankfully hubby had planned on leaving work slightly earlier anyway; so I rang him and made him promise he would leave early - not 5 minutes later than promised! I swear I was in tears, begging on my knees - if you could have only seen me. Yep - this is what the toddler is doing to my head these days... she FINALLY fell asleep on my knee at 5pm sobbing like her wee heart was breaking (and I was angry enough then that I hoped... well, we won't go there now; but suffice to say there was very little sympathy emanating out of me by then)!

* And Friday morning had been one of the fun times this week ...  here she is Friday morning down at the Botanical Gardens; pushing her brother in the stroller and feeding the ducks! Pure innocence! 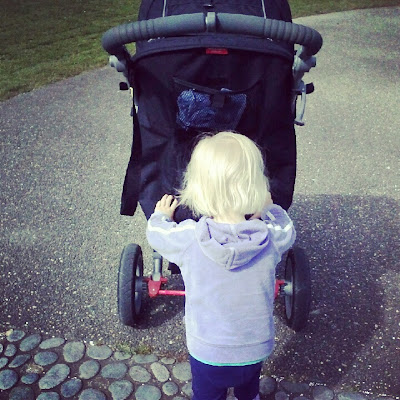 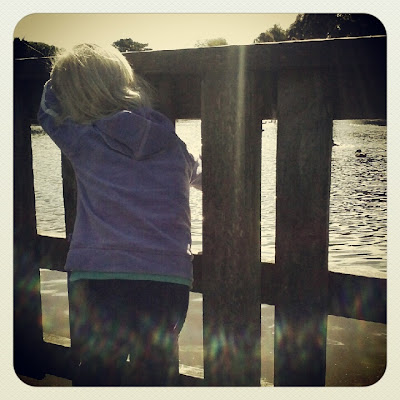 * Ahhh well, Saturday morning helped - we popped out to McDonalds for breakfast; it was such a success we have decided to establish this as a semi-regular family tradition; trying different places each time! 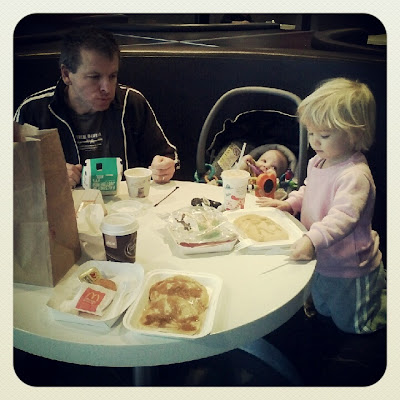 * It has been COLD this week... not just Auckland cold; seriously cold! Like 2oC frost cold - that IS cold! So it's been warm fires and hot bowls of porridge in the mornings: 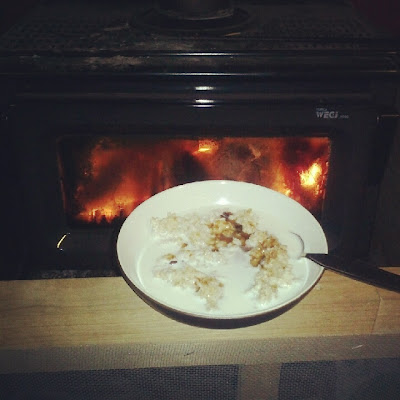 * My baby is teething... you'd think I don't feed him - here he is gnawing on his Gran's finger, and looking like he really is going to attempt to bite it off! 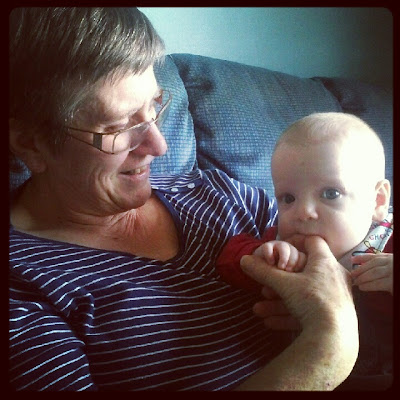 * He also has eczema, poor wee thing... down to the Doctors twice this week, as the cream they gave us just irritated him more and made it worse. Thankfully it is now looking better, and I can start to relax a little bit - but poor wee soul was not a happy chap mid-week!

* Talking of said baby - he rolled for the first time this week, from tummy to back, to look at the puppy mobile above his cot... but has not done it since. Nope - instead he is now getting up onto his knees and rocking, E.V.E.R.Y single time you put him in his cot to go to sleep... yep! He is also pushing himself around, and this morning he woke EARLY (after having been sleeping through the night for over two weeks, rascal) and I found him with his head right up and in the corner - blankets half off. Wonder if he woke up cold?!? Think when I change his sheets tomorrow, that the Safety Sleep will be put on and used from now on... looks like we have a 'Mover and Groover' on our hands here! Plunket did warn me ;-)!

Ange (Tall, Short and Tiny) said…
Oh dear, I feel for you over the tantrums. Tiny was at his worst just before Pickle arrived and I was so exhausted...let's just say that I know what those tears feel like. It WILL pass, so hang in there.

kiwimeskreations said…
Hope you can keep this up :-).
Did you really think the Drama Queen would let you off the TT's?? You didn't let me off, but we all survived and I don't think you were scarred for life.

Remember Button also started rolling in her cot the night we babysat for you just before Christmas??
Blessings
M
17 September 2012 at 14:53