September 10, 2012
It has been an interesting week... so I thought I would share a few highlights; however, it is almost 10pm already, so I doubt that I will get this post completed tonight!

Yep - that was as far as I got (isn't this a gross colour... guess that is why I haven't used it before)!

So - I was planning a Fathers Day post honouring my husband and the A.M.A.Z.I.N.G job he is doing with our kids; but it is kind of too late for that now! So I am thinking of starting another one to be ready to post on our wedding anniversary later this month... stay tuned!

But anyway - here are some pictorial highlights from Fathers Day to take in (you'll have seen a few of these photos already, but probably weren't aware they were specifically taken on Fathers Day... hence why I am sharing them again)! 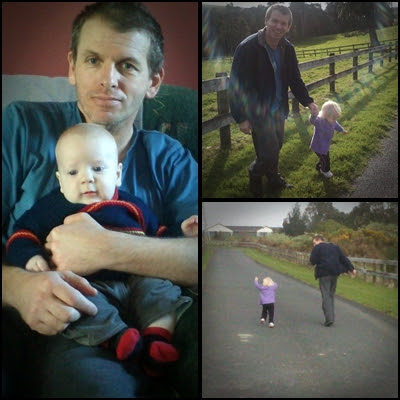 So - I am guessing it is obvious who is who... hubby and 'lil M to the left, and hubby with Button to the right! I tried to take photos of both the kids together with him - just wasn't a happening thing that day, grrrr! So this is the best I could do!

Talking of Fathers Day and all things celebratory - hubby only just realised, that out of the three Mothers Days I have been entitled to celebrate; only one has been celebrated in true style... both the other two revolved around a new born, as both kids were born within a fortnight of Mothers Day! SO in lieu of this, he has suggested I chose a Saturday next month as an 'Honorary Mothers Day', and he'll organise something special for me! Yay! I am quite excited about this :-)!

The following day hubby took a day off work as he had been feeling a 'bit under the weather', little did he know how true this ended up being in quite a literal sense... that day there were a few short sharp rain deluges in Auckland and this is what happened to us: 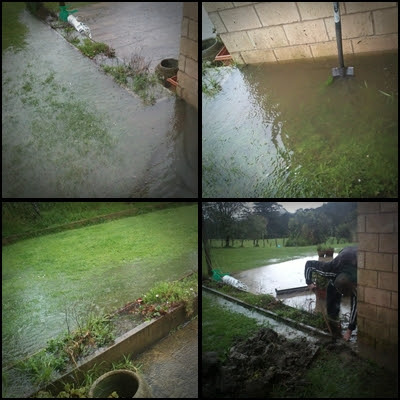 Hubby had to get out there and dig a ditch to drain away the water, as it was coming through the wall and into our living area... ooops! So much for a quiet day at home... ;-)!

That same day an Alphabet Mat we ordered online arrived - we had originally thought it was randomly printed and were quite disappointed (hubby wanted me to send it back, but I love the bright colours and cool pictures anyway), but it took a friend to point out the strange sequence - it does have an order, but they did cut it wrong... 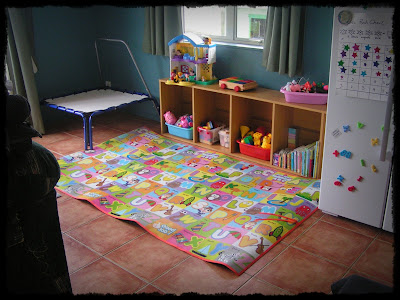 Don't you think it brightens up the play area anyway?!

As the week wore on it became apparent that I was coming down with a heavy cold... so much so hubby came home early from work on Thursday; not that this meant I got the sleep (not even the rest) that I wanted - breastfeeding puts pay to that! Never mind, it's the thought that counts! 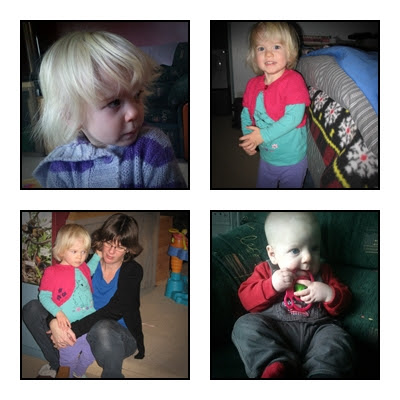 Thought I'd share a few favourite photos of the kids as well... loving the top left and the face being made! Loving the top right as it shows off my girls gorgeous big eyes (although they don't look as big in this collage as they do in the original photo)! Loving the bottom one of 'lil M, he is just starting to sit up - still needs loads of supervision and propping; but he is one strong little lad!

This past Friday my parents came up - I was starting to feel better, but of course as the weekend as gone by the family have dropped like flies, and both kids are sick (and hubby is not 100% either). So, while they have had fun - it hasn't been as much fun as it could have been! 'lil M is really starting to show some personality now, he is one happy wee lad and it doesn't matter how bad he is feeling - he will always manage a smile! My Dad is just dotty over him: 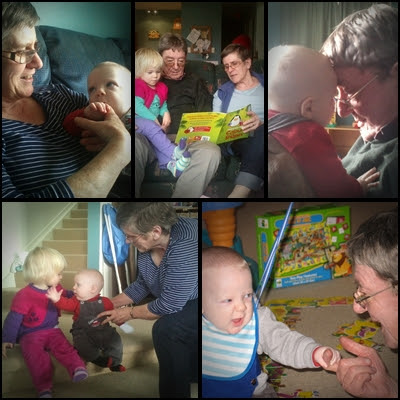 But don't you worry, Button still makes sure she gets plenty of attention ;-)!

Then the BEST part of the weekend... we popped out to the shops on Saturday, and decided (as we were heading to Sylvia Park due to the weather), we'd stop into Furniture City and take a look at the dining chairs we had our eye on. I have been waiting eight LONG years to get a Dining Suite - so we have finally come to the point where it is essential we get some chairs to go round the old table we have (it was three old random computer-type chairs until now, so we couldn't have more than one guest sitting eating with us... so we always have had to entertain in the lounge area, even for meals), as the kids are starting to grow up now! I had done quite a bit of 'internet browsing' and the only ones I had liked were from here (the link above should take you directly to the chairs). So the idea was to look at them 'in real life', and then over the following weekends take a look at other shops also (Big Save Furniture, Harvey Normans, Target, Farmers etc); and then once the credit card was fully paid off - we'd buy eight chairs, and pay them off by Christmas. Yep, that was the plan...

I was hugely impressed by Furniture City - they had some cool stuff for the kids as the photos below will show: 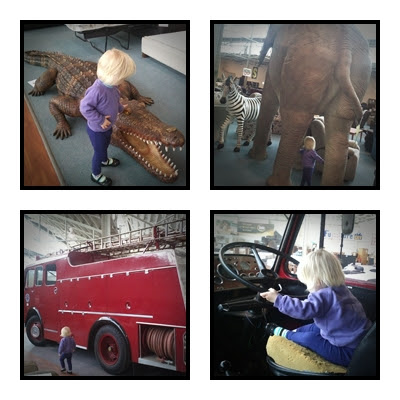 There was a HUGE crocodile, elephant and zebra (didn't see the sign about kids not climbing / playing on them until it was too late, ooops); as well as an old Fire Engine and also a small climbing frame / slide (which I didn't bother taking photos of)! Button LOVED it, and it meant hubby could talk business without a toddler whinging around his legs...

Yep - we BOUGHT them, and we now have four gorgeous hardwood American Oak chairs around our table, with another four still to be made up (will only be making up another two currently)! I am SO in-love with my chairs; it makes family meal times and sitting around our table a MUST these days... before it was a case of 'if we have to', as there was never enough chairs and they weren't exactly comfortable either!

The company hubby works for imports American Oak as well, so he is going to make us a HUGE table to go with the chairs ONE DAY... and in case you haven't been reading my blog long, you won't be aware of just how talented my hubby is, so check this post out to see some of the other pieces of furniture he has made for us! As an edit to that post though - the drawers have been completed for the Entertainment Unit (just recently) and are in use, but he does need to attach a piece of wood to the front of them to make it match the rest of the unit! That might not make sense - maybe I'll take a photo for another post some other time to explain it better!

So - without further ado, here are some photos of my chairs: 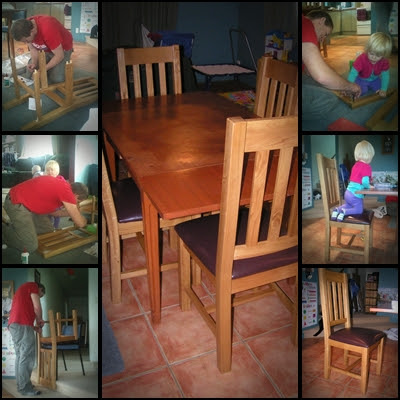 I LOVE these chairs...

Right now I am still basking in the glory of these chairs, so am happy to wait for my matching table; but I know it won't be long before I'll be starting to 'remind' hubby that they'd look better around a larger table ;-)! Did you notice the little helper and model?!?

Then just to top of a great day - there was another stunning sunset... and as I just can't help it; here are those pictures to revel in as well! 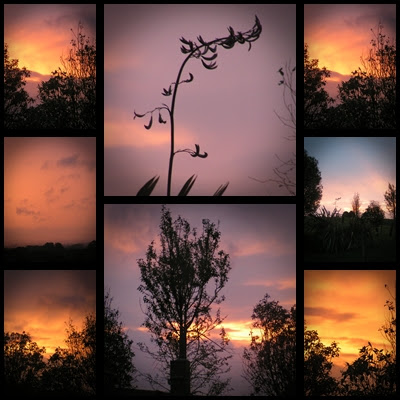 The rest of the weekend has also been lovely... but it has involved sick children, so not quite as relaxed or fun as Saturday was! VERY grateful to my parents for being here also, not fun when they're both sick at the same time :-(! I'm not sure how grateful they will be if they come down with the cold once they head home tomorrow; but hopefully they'll forgive us all (please)!

So that's it from me tonight...

kiwimeskreations said…
Having test driven them - they have my seal of approval :-).
Blessings
M