September 19, 2012
My little man has eczema... it was sad to see his skin so irritated and rough; and made me feel really helpless. I took him to the Doctors about three times before we finally got a regime that seems to have brought it under control (photos taken 12-13th September): 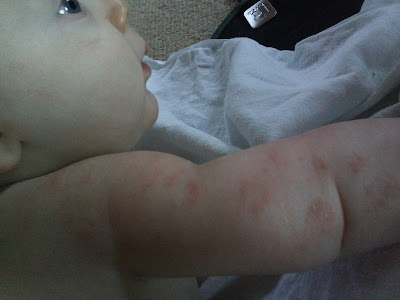 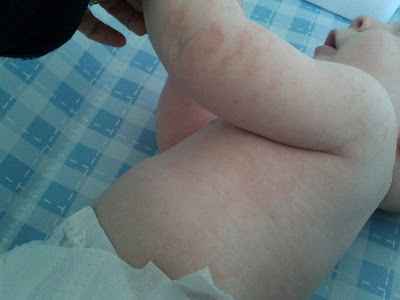 It was all over his arms and the top of his back, neck and back of head... it was also starting to affect his legs / knees, to the point that every time I changed his nappy he'd start scratching. Thankfully because of the time of year, his arms were hardly ever uncovered, so he never started scratching them. It must have been SO uncomfortable though.

On top of that he'd had a small cold and has been teething - so his face was dry and starting to look horrible, with a red, dry chin from all the dribble (we call him the King of Dribble) and a red dry nose from the cold... as well as red and dry cheeks. Poor baby - his nickname became Rashta for a while there (rhymes with his name, and is a play on Rash; blah, blah, blah)!

A friend of mine contacted me through Facebook when she read of his problems and promised to send down some 'Green Cream' for him... Emilee and her family make Goats Milk Soap and Creams which are all gentle and natural, they'd sent us some soap when Button was born and we loved it; but as she never had the same skin issues we're dealing with now, so we never really followed up and ordered more. But after the Doctor ordered us to not use soap on 'lil M, hubby asked me to contact Em and arrange for some more Goats Milk soap. She had very kindly already posted off the Green Cream and had automatically put a bar of soap in the package as well - such sweetness, you're the best!!!!!

I want you to know here and now - Emilee has not asked me to do this for her, she is not going to read this post any sooner than anyone else. This is off my back because I am SO impressed with the results... I don't do this kind of thing very often at all, but this is well worth sharing with you all!

I decided to just use the Green Cream on 'lil M's face, and follow the Doctor's regime very closely for the actual eczema... here is 'lil M's face a few days later (photo taken 17th September): 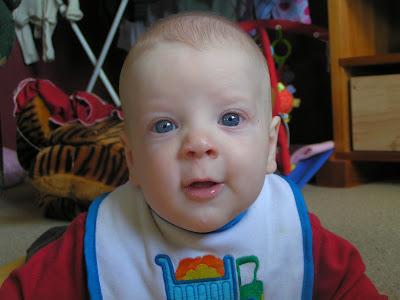 I only wish I had also taken a photo of his dry blotchy face at it's worst, rather than just his arms and torso; as really you have nothing to compare this photo with... so you're going to have to trust me on this one! It is now clear, not even a hint of dribble rash - and trust me, he hasn't stopped dribbling *grin*, and no signs of dryness or eczema anywhere. He looks like a baby with beautiful skin once more, and I am thrilled to pieces!

Thanks Em... I have to admit to being a little skeptical initially (don't hate me), as it is GREEN (only a pale green... but green all the same) and it doesn't smell like 'normal' cream; but I LOVE it! 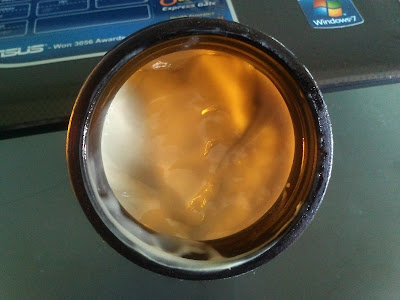 Should you also be interested in trying out some of their products, you can find them here, pop in and let them know I sent you... both Emilee and Aaron (her husband) have known me (us) for years!

Cat said…
It's always great to find a natural remedy !! !!
I make my own laundry liquid because lil Miss has such sensitive skin
19 September 2012 at 16:35

kiwimeskreations said…
SOOooooooooooo glad for you all that the eczema is under control and his face is as handsome as ever.
Blessings and hugs
M
19 September 2012 at 19:57

Amy said…
Yay, glad Lil M is feeling a bit happier. It must be so hard itching without being able to scratch (I am a scratcher, okay, I totally admit it, grin!). I am using one of Em's soaps at the moment too.
20 September 2012 at 20:04