* Why does one's hubby decide to have a 'deep and meaningful' LATE at night when you're extraordinarily tired? Seems to happen EVERY.SINGLE.TIME! Not that we have a lot of these kinds of 'deep and meaningfuls'; this truly was a serious one... but on the odd occasion that they happen, it is always late at night when I seem to be exceptionally tired! Ahhh well, I guess I should be (and am) thankful that he still talks to me, and that he WANTS to talk to me!

* But on a cuteness note - check out these photos: 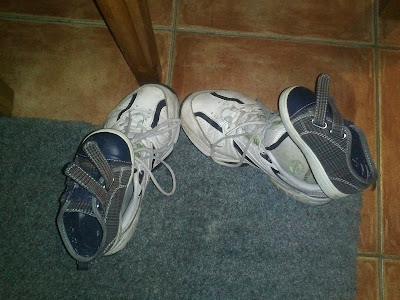 Discovered one night after Button had gone to bed...
awwww, her little tiny shoes placed on top of Mummy's big ones!
And she knew exactly where she'd put them the next day when she went to find them! 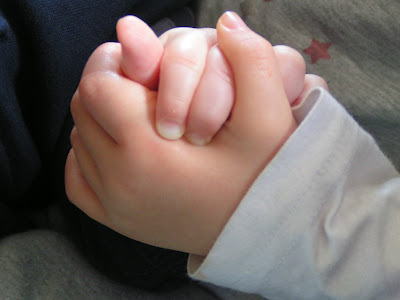 How my kids adore each other currently... Button can't get enough kisses and cuddles,
and  'lil M just laps it all up with a BIG smile! Just the cutest!

* We are both slowly working through 'our lists', well at least hubby is... today he finally got into preparing the start of a garden we have been talking about for almost three years! 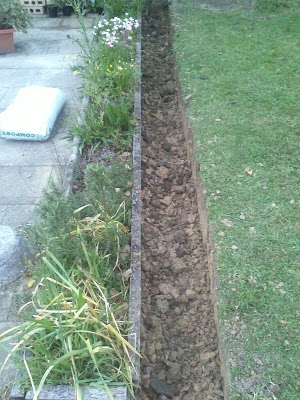 * There was always a little garden here (left), but we have never really bothered with the up-keep of it... there were strawberries and herbs and a few flowers. But hubby has dug out some more behind it, will boarder it off properly over this week and refill it with mulch and compost and other such important things. 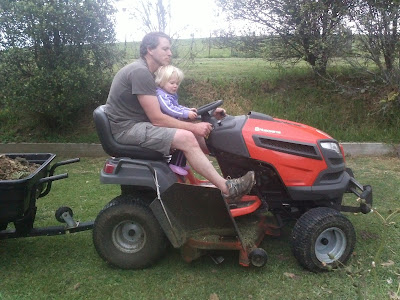 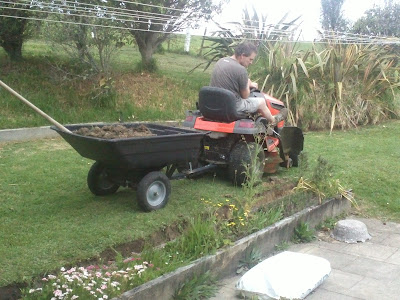 * It was surprising how much dirt came out of what appears to be quite a small trench... we had to borrow the neighbours (landlords) Ride-On Mower to remove the dirt and dump it somewhere appropriate - much to Button's delight!

* So - yesterday we went to Kings Wholesale Plant Barn near Manurewa and bought some more strawberries, some thyme / Italian Parsley / chives, and four different types of flowers for the new garden! We will clear the other part, but keep some of the plants (strawberries, mint, rosemary and a possibly a few other things if we recognise anything else)!

* We will be going back there in the not-to-distant-future and buying a few more things such as lettuce and tomatoes etc, to fill in the garden! Yay - much excitement over this, especially from Button :-)!

* There have been some awesome skies around here recently, so I have been out capturing them as usual - here are a few of my favourites from the past week or so: 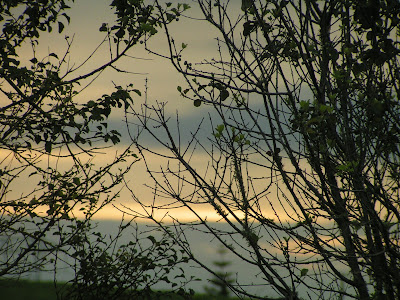 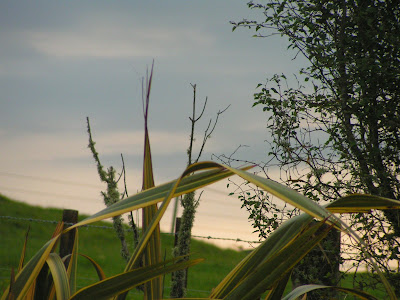 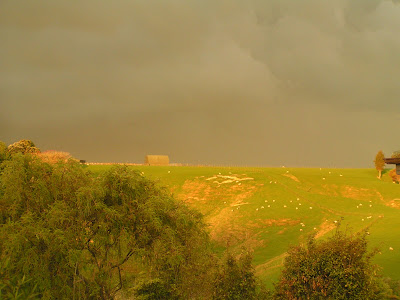 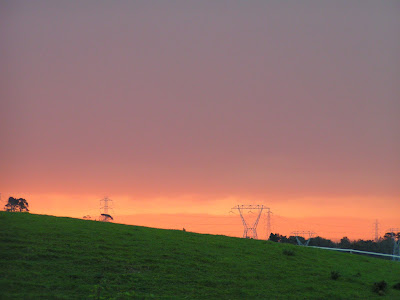 * On Tuesday I had one of 'those days' and hubby came home for the afternoon... I am so incredibly grateful for a hubby who not only does this, but is understanding. I struggled through PND with Button, but have stayed relatively strong with 'lil M; however we all have our moments and Tuesday was one of mine. He took Button out for the afternoon, and left me at home with just the baby - I didn't actually get any down-time, he got up as they left and went down just as they got home; but only having one (undemanding child) was still a good break!

* We made huts this week: 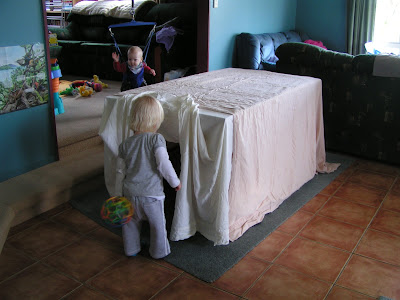 After 24 hours Mummy wanted the table back, so we came up with this one instead (which, incidentally is still there): 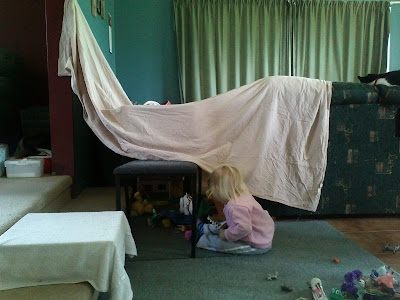 Took her a wee while to grasp the concept initially, but it has been well used since...

* On Wednesday hubby came home with flowers; bright orange gerberas (one of my favourite types, we had gerberas at our wedding). Flowers brighten any room up, and these ones are no exception: 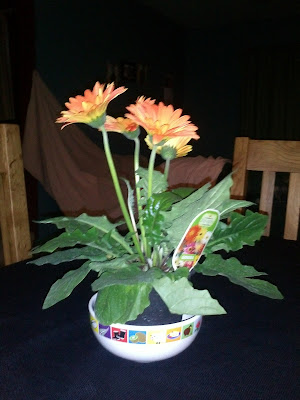 * We have had more toilet-training, here Button is showing Dorothy (the green dinosaur for those not in the know), and Wally how to sit on the toilet - she specifically asked me to take this photo! 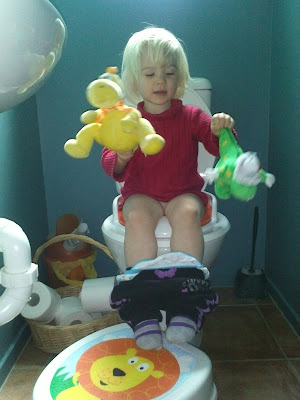 But still no luck with any actual business happening in the toilet - but she 'gets it', and understands what she is supposed to be doing. Mummy has, unfortunately, been very inconsistent this week; which probably doesn't help!

* Had our first Christmas celebration of the year yesterday... some good friends of ours are heading overseas for Christmas, so had an early dinner here with friends. They very thoughtfully bought enough Christmas crackers for all the children (except 'lil M who really is far to little yet). It was Button's first attempt at it (with a little help from Daddy) and she got a cheap yo-yo, that didn't really work - but she didn't care: 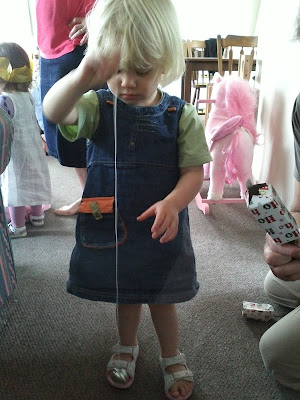 * Amazon Customer Service ROCKS! Hopefully they fix my self-inflicted issue, and I can get back to some Kindle reading!

* I actually did some menu planning on my new whiteboard this week, and it WORKED! I chose meals I would normally cook anyway, and it meant hubby could see what we were having - and he went and got the chicken out of the freezer for me when he read we were having roast chicken; score! It also meant cooking was much less hassle, as I knew ahead of time what I was making and there was no last minute I-don't-know-what-to-cook meltdowns!!!!!! Think I will be keeping this new little routine going... will need to sit down tomorrow and nut out what to cook for this coming week.

* There is more - I am sure, but it will have to wait or be ignored as I am tired!

PS - I have noticed a trend away from bullet points and back into paragraphs again... guess I need to either rename my Sunday Night Posts, or rethink and reflect and get back into writing them properly. I have a case of verbal diarrhea (as my Mum calls it), both in terms of talking and typing - learning to write short, punctual points is probably good for me ;-)!

Cat said…
Check out the colours of those skies!
I refuse to have deep n meaningfuls in the bedroom LOL it is for two things only and one of those is sleep aha !! !! *nod nod wink wink*
Go you and yeah for menu planning
Yesterday I cooked 3 meals at once in the oven (only one lot of power there girlfriend LOL) and now I only need to reheat!
11 November 2012 at 21:49