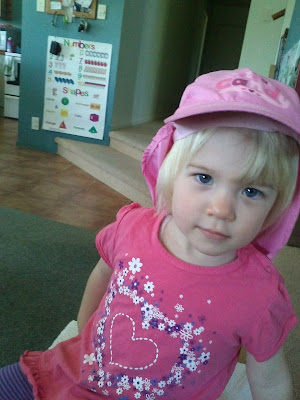 As with most two year olds - Button doesn't stop talking, just about does my head in some days! But she comes up with some of the funniest things (and does some of the cutest / sweetest / most classic things as well); some of which I have shared on Facebook, and thought I would share here with you also (sorry if you're a friend on FB and have read these already)!

Quote of the day from Button:Changing her nappy yesterday after her sleep, & she was whinging away (as they do), so I told her to stop being a Drama Queen, to which the response was:'I'm not a Drama Queen, I am a Drama Princess'! I responded, between chuckles, 'Yes, I guess you're right - you're a Drama Princess, not a Queen!'Then a cute little voice said, 'I am Daddy's little Princess'!Awww, too cute!!!!

This morning I was eating some cake a friend had sent over for me, I didn't give a piece to Button as I knew it would be wasted on her (she isn't mad-keen on anything cake-like yet). She had her own morning tea, but as usual - as soon as I sat down she asked for some of mine. Initially I stuck to my 'no, you have your own'; but when a little hand popped over and left an offering on my plate with some of her own morning tea - how could I resist!?! Cheeky monkey... but as I suspected, the cake was a no-go; however the icing was another story - it disappeared quickly and she came back for more!

Quote of the day from Button:I was making her lunch today & was cutting up a strawberry... it was quite a big one, so I commented on it's size to her. Her response:'Wow, it's bigger than Daddy's legs Mum!!!'What does one say to that... it was far from that big!

Quote of the day from Button:

Quote of the day from Button:

She had picked up some food off the floor, and I had told her to throw it in the bin because the floor is dirty, her response was 'Well clean it then Mum'! She's been hanging with her Dad too long...

Apparently Daddy can fix anything! Sweet!

Current favourite thing to say when she is doing something she knows she shouldn't (for example - eating her tomato sauce by itself, she is a tomato sauce LOVER and will always eat it first and then ask for more; so we are always telling her to eat it WITH her food)!
'Turn your head around Mummy, and go watch the TV' (or go watch 'lil M or something that is in the opposite direction to where she happens to be sitting)!
Then if you don't do as you're told (and we don't play along with things like this), her next response is 'Turn your head around and watch TV PROPERLY'!
Of course she is told she can't talk to us like that, is then told off for whatever she happens to be doing and watched a bit closer for the next while... but somewhere in this time we generally have to 'Turn around and watch TV properly' in order not to blow our cover and laugh in front of her!

I desperately need to find a little notebook and have it handy at all times, and start recording some of these comments... these are seriously only a few, there have been so many more and so many FUNNY ones! She had us in fits of laughter just yesterday, but do you think either of us could remember what she said when we had friends come over last night!!!!!

If I manage to do this (that is - find a notebook and start recording), I might have to do more of these kinds of posts!

Hope you found these as funny or as cute as we did! Maybe it only seems funny / cute because she is our daughter and we know her...!!!! Either way, I'll still be sharing - this is a good way of recording some of the classic things she says for future reference (such as her 21st *grin*)!!!!

kiwimeskreations said…
Oh yes, these are so priceless and come and go so quickly that you HAVE to record them.
Blessings and Love
M
4 November 2012 at 14:01

Sophie said…
I laughed outloud at her strawberry that was bigger than Daddy's legs! Very amusing!!! They are such precious moments aye! Thanks so much for stopping by the blog and commenting. xx
5 November 2012 at 15:34