More Randomness from a Mum getting used to being TIRED!

November 08, 2012
* My big girl has a cold... she used to be such a happy little sickie; not so much now (imagine Drama Princess, hehehe). Looks like I might need to head down to her again soon (hoping she'll resettle by herself); looks like yet another long night ahead :-(!

* My kids are born with munted toe nails... seriously! Button's are settling down and behaving more normally these days, but 'lil M's are impressively BAD! Turned heavenwards, and curled - making it very difficult to cut them, as they're still so little as well.

* My baby is a good eater, been on three meals a day for a while now... but he still won't take meat! I blended up some mince a while ago, and have tried it on numerous occasions with different flavours mixed in, extra water to help swallow it - but it's a no-go EVERY.SINGLE.TIME! He just doesn't like it (gags and spits up every bite)... might need to try some chicken; having roast chicken for dinner tomorrow, so will save some and see how that goes instead! 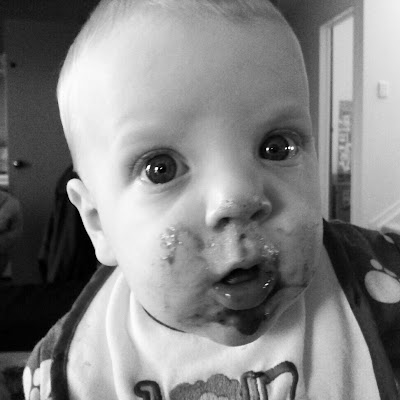 * Button is dropping her day sleep, much faster than I want her too... it has been happening on and off for a while; but this week she hasn't slept 5-6 days! Even though the last two nights have been rough with her, and she is sick - she still refused to sleep today *GRRRRRR*! She was a mess this afternoon, and so was I!!!!!! 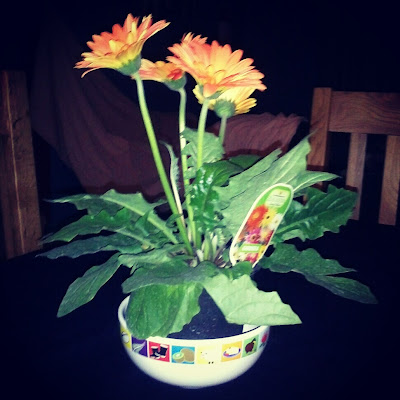 * There is so much going around in my head, but most of it I can't talk about here... I HATE that; as this is how I process things (either talking or writing)! I suppose I could go back to the old ways of writing in a journal; nah!!!!!!!

* Sleep is so over-rated, ya think?

* I have over 280 photos sitting waiting for me to rename and file... think OCD, every single photo is named and filed on my computer! Yep; seriously! We're talking thousands, literally! I am normally fairly OCD about doing it all straight away - or it builds up (like now) and becomes a mountain that takes forever to do (when I stop procrastinating enough to start it, that is)! But at the moment tiredness wins every time, and things get left...

* I also have over 260 e-mails sitting in my inbox, most of them waiting to be read and then filed or deleted... somethings gotta give soon; and it feels like it will be me!

* I have just discovered this awesome site: Blog Lovin; this is what it says:

Reading blogs can be a pain in the ass. We created bloglovin´ so you wouldn’t have to visit un-updated blogs, open ten windows in your browser, or forget your favorite blogs web-addresses. With bloglovin´ we wanted to make your blog reading fun and easy.

Sounds sweet! How does it work?

Sign up, add all the blogs you want to follow, and then you’ll get notified every time one of your favorite blogs has written a new blog post. Both on the web and on your iPhone or Android phone.
I cannot actually recommend it yet - I have not started using it, but it looks good! I have so many tabs up sometimes, that twice my computer has crashed... so something that will help me to keep this in order will be a good thing!
* I have actually started reading another novel recently... why, I am not sure as I haven't had much spare time; but there you have it! It's a Maeve Binchy book, I really enjoy her writing and have a few books of hers - this is one I bought a good friend for her birthday last year, and have borrowed it back to read it myself (months ago I might add)!
* I am starting to have to look up Baby / Toddler Recipe books, as poor 'lil M was getting the same old, same old! I am being much more adventurous with him though - he is getting things like kiwifruit and prunes already, I also just blend up the combination of veggies I cook for us each night (tonight's didn't go down so well though, as I added pasta in also... hmmm), so he gets a taste of our dinner! There are probably a few things in those I can do to increase Button's basic staples also!
* I am back on dairy... after a few discussions with hubby, and a few Mummy-guilt moments - I decided that 'lil M gets eczema whether I am on dairy or not; so I have decided to go back on slowly and see what happens! I have just been having 'normal' milk in my hot drinks again, and a little bit of cheese this week - so far, so good! He seems to be coping with it, I am E.N.J.O.Y.I.N.G it muchly and the eczema is no worse than this time last week! Will increase the dose this coming week and see what happens! Yay!
* Know the one thing 'lil M still seems to react to? Berocca, madness or what? AND of course, it is exactly what I am needing at the moment with the lack of sleep... oh well, one day even that will be okay once more!
* I blitzed the house today... vacuumed, cleaned both bathrooms and toilets, tidied the place up - it was seriously looking like a pig-sty; and how I did this with a sick toddler is anyones guess! Even mine, as all I heard all day was 'Cuddle Mummy?'. Had a few melt-downs, seriously - throwing herself on the floor and literally screaming as loud as possible, I really had to work hard not to smile at times (I know it was tiredness and feeling sick that did it, but still made for a LONG day here)! 'lil M gave me a 3 hour sleep this afternoon, and slept right through the worst of it - miracle!
* Started building huts here for her this week - stole the idea from Stella, so simple; but it worked a treat yesterday... today, not so much! 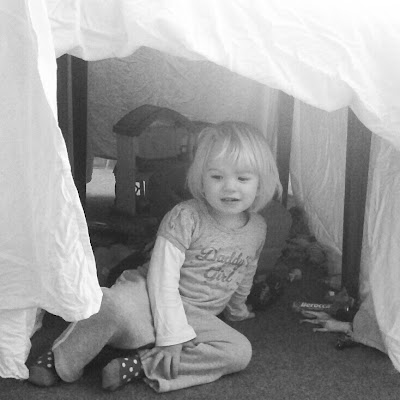 * I think that is about as much as I can come up with for now... off to bed, and hoping for a better night! So far, NOT so good - gosh, she is such a 'Drama Queen' when she is sick (hubby thinks it's hilarious... revenge in fact; as I am as well - he is an 'easy' sickie and just keeps going until he crashes and then looks after himself... not me *grin*, I tell ya - there is a lot of generalised 'role swapping' in this marriage)!!!!!!

kiwimeskreations said…
Ah - the revenge of the grandies - think what I had to go through ;-). At least you and your brother were generally sick together (you specialised in sharing bugs)and at times entertained each other.
Sleep well.
Love and blessings
M
8 November 2012 at 22:27

Amy said…
I can so sympathise with the 'getting used to being tired!' I'm forgetting what it feels like to have good sleep!
Check your Berocca label - Lil M might be reacting to artifical sweateners or something like that - my dad was horrified recently to find out that the Healtheries Boost drink labelled as 'healthy' has artificial sweeteners...for some of us (okay, me and my mum!) that's all it takes to be a bushy-eyed bunnykins all night long, so maybe he's responding to something like colouring or flavouring in some way? Munchkin didn't really like meat either, but he sure does now!
Hope you managed a decent night last night!
9 November 2012 at 19:53