December 19, 2012
My children are SO good at the moment, they make me want to swoon and just grab everyone and tell them how lucky I am (except for yesterday maybe *grin*)!

Button is no longer sleeping every day - some weeks she'll sleep 4-5 days out of 7, other times only 2-3 days... up until recently it has been a case of banging on the door and wanting to come out after only 15-20 minutes; and then on-going whinging when I discourage it. She can now open her door also, so there has been a lock put on it - to save our sanity as much as anything else; some evenings we were still putting her back to bed at 9pm... not good, not good AT ALL! I am sure you have all been through it, or will go through it soon enough - so I won't go down that track!

But this past week something has clicked - and even though today she hasn't slept, she has been playing nicely in her room since 1:30-45pm, and only once have I had to go down for something (it is now after 3pm)! I can hear her chatting away and playing with her 'babies' - she is such a little Mummy! 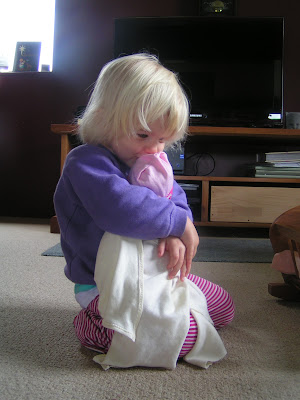 I am LOVING this age - she is over the worst of the tantrums, we still have our moments (like yesterday *cringe*), and she is really into pretend play, and pottering around doing her own thing most of the time... isn't requiring constant attention or affirmation like she was! She is old enough to reason with; the past few days we have asked her to promise us that she won't come out of her bedroom when we pop her to bed - she promises, AND she keeps her word! She is also old enough to do bigger more complex and fun things with; such as icing and decorating biscuits... she is good company, and has such a funny sense of humour! Some days I wish I could turn her voice off, as she doesn't stop talking or asking questions (I hardly ever have the radio on these days, just the odd kids CD to try and distract from the constant chattering); but most of the time I don't mind too much as she doesn't necessarily require me to answer everything!

Button and 'lil M are interacting more and more - the other morning Button had slept in until after hubby left for work at 7am... 'lil M had been up for a while and playing by himself; but the second her door opened and she emerged, his whole face split in half, he grinned so hard! He was SO excited to see her, and it was lovely to watch! He looks for her all the time (always has done, but it is much more obvious and excited about it now), and they laugh at each other quite often for no apparent reason, known to adults anyway! 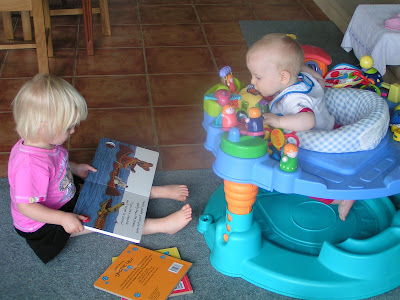 She mothers him something chronic and has started speaking for him 'Mummy, 'lil M says...'; something I am really going to have to watch for (deja vu Mum)!

Today though, he was getting hungry and grumpy - I was making both their lunches; but wasn't quite ready to pick him up. Button knew what was going on, as I was talking while I was prepping - to try and distract him, and to let her know what was happening. Next thing I know, she'd gone down to him on the mat, and had cuddled him - telling him he just had to wait a little bit longer, then proceeded to get him some new toys; distracting him long enough for me to finish organising their lunches. SO sweet, and so appreciated (and I made sure I let her know also)! LOVE!

'lil M is also just the easiest (when he isn't teething, poor chap), laid-back sweetest thing ever... he has been known to spend a good hour or more just playing by himself in his play area - rolling around and finding other toys to munch on; while I cook and Button keeps herself busy! I LOVE him so much, he is my little snuggle bunny; and will always put his arms up for a cuddle, smiles constantly and just endears himself to everyone he meets!

I am feeling so blessed, especially after the sad news last week in America... just breaks my heart; and made me hold our small ones that bit tighter, and be that bit more thankful for them over the weekend.

I have so many other posts I want to do - I haven't forgotten you Ange, or the award you gave me... promise I'll do a post soon! I missed yet another Bullet Point Sunday this past weekend, and there are also a few other things whirling around my head... I am hoping things will lighten up a bit after 'The Silly Season' is over, and I'll get a little more time!

Until then - have a Merry Christmas, and if I don't get a chance to blog before then... have a half glass on me (I don't drink much, so a whole glass might leave me giggly these days *grin*)!

kiwimeskreations said…
what a precious time you are in - enjoy it - and yes, definitely a sense of deja vue!! I had to smile when I read that!
Blessings and love
M
19 December 2012 at 22:06

Amy said…
Awww, they sound like little angels. Grin. So glad you are enjoying a nice season with your cherubs.
Here Munchkin has a habit of getting out of bed - still sleeping nearly every day during the day as now getting up earlier...the funniest thing is when we walk in and there he is with a toy from the cupboard, "Just putting back, Daddy." Yeah, sure. How do they work that one out so early?? Cupboard now gets 'locked' with a scarf, soft toys are in basket in conservatory, books in lounge...door lock has not yet had to be employed though as usually a reminder is sufficient. Oh, and blankets are in linen cupboard in the hopes that climbing on furniture will cease. Time to get the boy up for some Mummy cuddles, yay! Hope you've had some good ones today. Amy
20 December 2012 at 14:38