What an awesome bunch of link'ers last week! Thank you so much for making the effort to pop in and link up with me, and for all your kind words - they may (or may not) have brought tears to my eyes!

Hope to see you all, and some newbies, along this week as well!

This week it was the 'First Week of Reality' for us, as hubby headed back to work... but I have to admit we were all ready for routine again, even him! A month is almost too long, and if he didn't have to take the whole time off, he wouldn't.

Sunday afternoon we did get to catch up with some friends, their son is exactly a week older than 'lil M - but what a difference, J is MUCH bigger and is basically walking (had taken his first 5 steps that weekend), while 'lil M is still commando crawling! I have to admit - I am happy for him to stay that way a while longer yet! 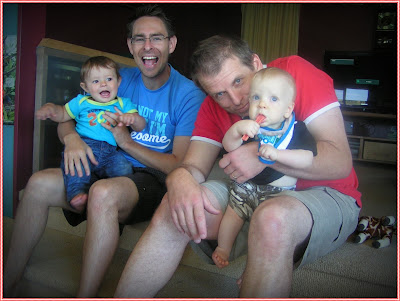 Here are the Dad's and their boys!

Monday was a quiet housework day... 'lil M had been 'teething' and grumpy for over a week, and so I rang the Doctor to try and make an appointment for him; just wanted to make sure there was nothing else underlying such as an ear or throat infection... but couldn't get in until Wednesday. So we quite happily stayed home by ourselves all day, the kids were great and I actually got a lot achieved - the house was so sparkly, hubby just about fell over in shock when he got home!

On Monday evening we even had a yummy dinner, which included fresh herbs from our garden (Italian parsley and thyme): 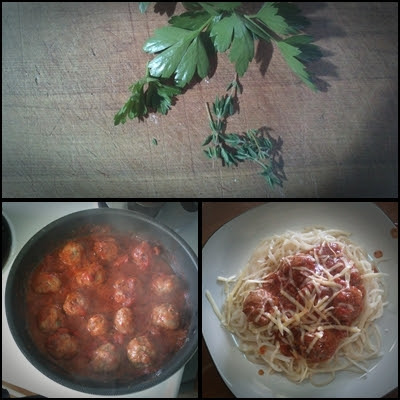 On top of spaghetti, all covered in cheese...

On Tuesday we had a Plunket appointment for 'lil M - 9 month check up! We know he is fairly small for his age, but it turns out he is VERY small, in the 9% in fact! He weighs in at 7.8kg and is only 69cm tall (Button was 8.58kg and 70cm tall at the same age)... however, he eats like a horse and we are not worried, seems to have his Dad's fast metabolism (lucky bugger)!

Wednesday and Thursday saw us down at the Doctors twice - turns out poor 'lil M has had rubella (so his nickname became 'Rasher Asher with Rubella'), no wonder he's been so grumpy! Wednesday he came out with the spots, but thankfully they cleared up by Friday... but it turns out he'll be contagious for another 2 weeks AFTER the spots appear! So a fairly quiet couple of weeks ahead, despite the fact he seems fine now... staying clear of pregnant women and tiny babies.

Wednesday our microwave up and died on us - just like that, Grrrrrrr! So I took the kids down to the shops, and we met hubby there after work on Thursday and bought a brand new one, as well as an electric frying pan... hoping to get down to Briscoes this weekend and get a few other things also.

Button hadn't slept for an entire week, longest she'd ever gone - so I was expecting a lovely quiet sleepy week from her... was not to be! She refused to sleep until Friday in the end, despite being obviously tired every single day - she'd tell me 'Mummy, I am not going to sleep today... I just want to play'! And play she did, I'd still put her down for a sleep - I tried everything from threats to bribery; nothing worked until she crashed after a tantrum on Friday!

Due to Button not sleeping - I have been having to try extra hard to find ways of keeping her busy... she always has a rest, but it doesn't last as long as her sleeps did! Below she had been playing with her animals in some flour while I did some baking, then a day or so later she 'bathed' them as they were dirty! 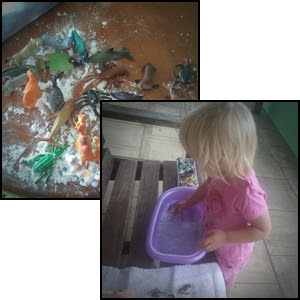 And here are some more random photos from our week: 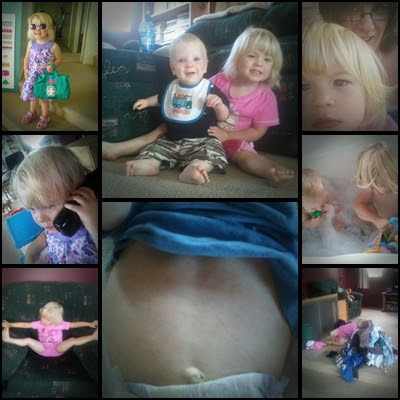 Left - top to bottom:
1) All dressed and ready to head to the Dr, with her own little Doctor kit she got for Christmas (and upside down sunglasses *grin*)!
2) Talking to Nana on the phone!
3) This is what I call flexible, splits Button style!

Middle - top to bottom:
1) My two gorgeous children
2) 'lil M's tummy covered in rubella-spots... hard to get just how bad it was though.

Right - top to bottom:
1) Button and me having cold ice blocks on a hot day (not that you can tell in this photo)!
2) Now this is what I call a BUBBLE bath! 'lil M not so keen!
3) Keeping the toddler busy... gave her a mountain of clean washing and got her to sort them into the correct piles!

'lil M is at that delightful age of putting everything into his mouth... literally: 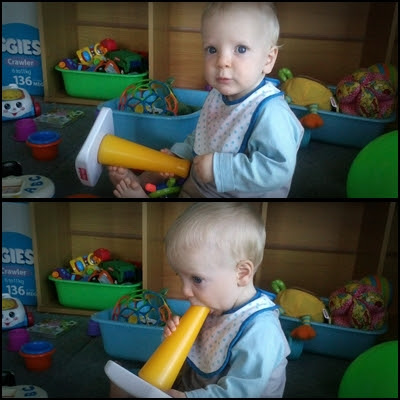 We are very lucky up here, it is Anniversary Weekend for us, so hubby has Monday off... so one week back at work, then a long weekend!

So we decided that Saturday would be our 'Family Fun Day', and chose to head down to the Botanical Gardens for a picnic - spontaneity just doesn't work with two little ones, and it took a good 2-3 hours to prepare and get down there, but we all had fun! 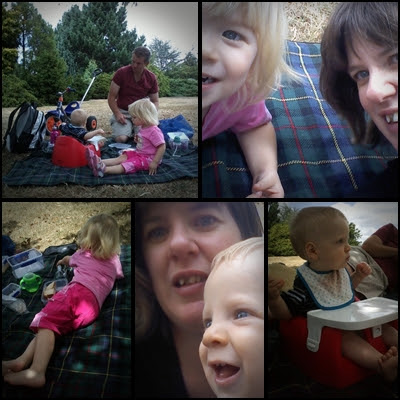 The kids then followed that up with their first swim in their paddling pool after a sleep (yep - two sleeps in a row from Button, but she was then awake until 9:20pm last night... thinking it might not be worth it after all)! 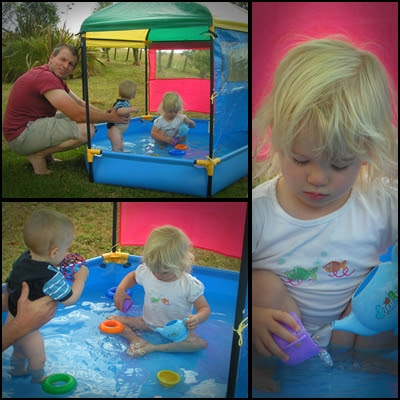 Today is quiet... no church for the next two weeks due to the rubella, so not really sure what we'll do; but I have a list a whole page long of things I want us to try and complete over these next two days; hmmmmm! Wish me luck!

kiwimeskreations said…
What a great week you have had - in more ways than one :-).
Love the photos of lil'M with the toy in his mouth - and the 'look' in the other photo!!
I am really enjoying these weekly catch ups.
Love and blessings
M
27 January 2013 at 18:03

Amy said…
Sounds like you had a nice first week of reality, despite Lil M being unwell. Hope your second is even better though! Amy
28 January 2013 at 20:42