It has been a quieter week this week - totally grateful, but still struggling with lack of sleep (and by the end with a bit of cabin fever)! However, I guess if I am feeling a little better overall - it's a good thing; a little cabin fever never hurt anyone, right?!?

So I am going to start this week with some random pics: 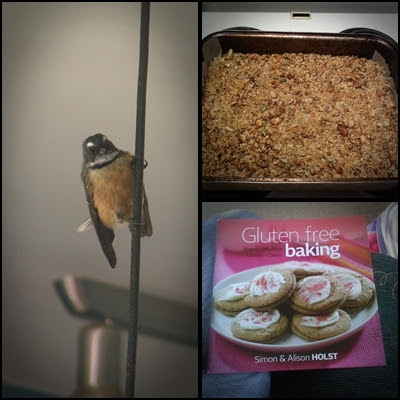 1) We had a beautiful little feathered guest join us one morning this week, much to Button's delight... it eventually found it's way back outside, but not before posing for me!

2) I finally managed to make some gluten-free muesli that is also hubby-safe! He can't stomach nuts and dried fruit either, so every other batch I have churned out previously has always had something he has reacted to - but this one was deemed a success! The best compliment a wife could ask for was 'I could live on this'; guess you can call that a success ;-)!

3) On Thursday a parcel arrived - from an online store I have never heard of (something gorilla), let alone bought anything off... quite intriguing! It was the Alison Holst book above that a very special Aunt ordered and had sent directly to me. Being on Facebook and following my blog, she knows I have caught the 'baking bug' - asked me if I had this book, and when my reply was negative; she went about making sure that I got my own copy!

It is being put to good use already Aunty Shirl - today I am making the Chocolate Caramel Slice, hubby has been craving that for a LONG time and started bugging me a few weeks ago! No excuses now... here it is 2/3 completed, just waiting for it to cool completely, so I can put the chocolate icing on to finish it off! 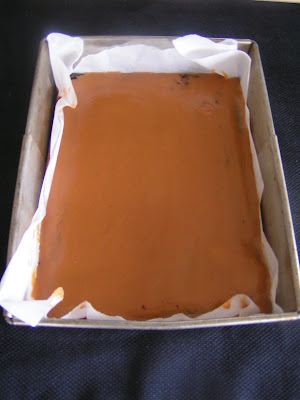 Doesn't look exactly like the picture in the book, but...

Here are a few pictures from our week: 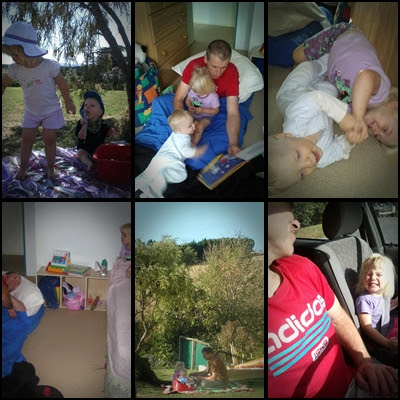 Left to Right, top followed by Bottom!
1) What else do you do on yet another hot afternoon... go outside under the only shade tree here, and have water play!
2) Story time (or in 'lil M's case - annoy your sister time)!
3) The Sibling Wars have begun... wrestling!
4) On Friday there was a Daddy-Daughter Sleepover in our house! Button had been counting down the sleeps all week, and then counting the hours ALL day - she was exceptionally excited! Took until 8:30pm to get her to sleep, then she woke at 7am with an almighty tantrum; poor Hubby got very little sleep as apparently she is quite the loud, restless sleeper!
5) We had a 'picwic' dinner under the tree on Thursday evening at Button's request, wasn't prepared for it (very spontaneous), but it was fun and the kids ate well!
6) Most afternoon's there is a request to 'go and meet Daddy' after work out on the drive way... generally it starts about 4pm, and by 5pm I give up and we all head out to sit on the grass and wait. Button LOVES it, and is allowed to sit in the front seat with the seatbelt on (just like an adult Mummy) for the last few metres! It turns out hubby secretly loves this little tradition as well, and feels very disappointed if we're not there! 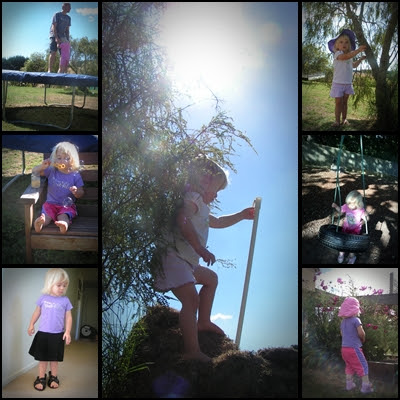 Included:
Lots of time on her new $50 trampoline!
Blowing bubbles.
Wearing Mummy's shoes!
Climbing the kowhai tree!
Playing on a tyre swing at Preschool.
Sniffing the flowers as we waited for Daddy one afternoon.

Big Photo:
This is out by the climbing / shade tree (kowhai). I love this photo as it makes her look like she is climbing a mountain with that stick in her hand! 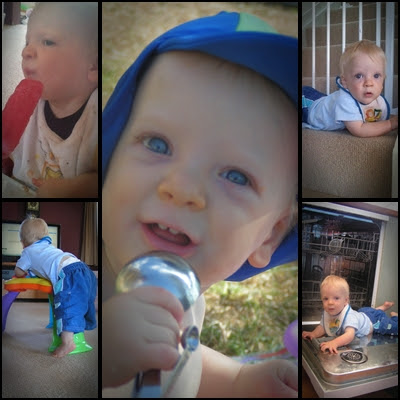 Included:
Introduction to his first ever ice block (has had ice cream before, which went down a treat), but it didn't turn out as popular as Button's first attempt!
Loads of climbing and exploring; managed to climb the main stairs to half way up the second flight, 'discovered' the dishwasher and how fun it is to climb on the door and splash, and tried climbing up and over his activity table!

Big Photo:
Just my favourite one - outside having water play, but it really captures his personality! A little ray of busy sunshine... he is FULL of life and energy, and just doesn't stop the entire time he is up, unless you have him in the highchair or stroller (and even then his little head is moving flat-out as he watches everything around him, very annoying when trying to feed him *grin*)!

So - there you have it! Another week over with, and a new one about to begin...

This past week we popped into a Preschool to have a visit, and tomorrow we'll be taking another look at that one and a second one - both which have current spaces available for Button to start, whenever we'd like her too. Hubby has tomorrow off work, so that is our main 'job' to do - one in the morning, and one in the afternoon. I'll be watching for how the staff interact with Button, and how she responds to the environment; when making a decision as to which one we'll enrol her in... the idea being she'll start a couple of mornings a week (after she turns three), and we'll increase her hours as and when we feel comfortable - this will be in replacement of kindergarten. Both of these are local, and one comes highly recommended and is a Christian-based centre (have just been allowed to increase their roll, hence why spaces available); the other one has only just opened this year and hasn't quite reached it's full capacity. I'm a bit nervous, but I think it'll be good for both of us...

Last night Nana arrived by bus, Button had an afternoon sleep after her late night the previous night - so was allowed to stay up, and go with Daddy to pick her up. However, she was on such a high she didn't go to sleep until 10pm (despite being in bed by 8:30pm); then woke at 6am - I can't remember the last time she woke that early. We were NOT happy parents, but she has coped remarkably well today, and has just woken from another short arvo sleep... this should mean that we'll get her down reasonably easily and early again tonight (should being the operative word of course).

It is RAINING today... repeat this in a happy sing-songy voice! Yep - tried to send them all out for a walk in the rain, but in the end it was a bit to heavy and windy to be out for long; so Nana and Button went and looked at the chickens and then came back and watered the garden - what for I am not sure, but it was cute: 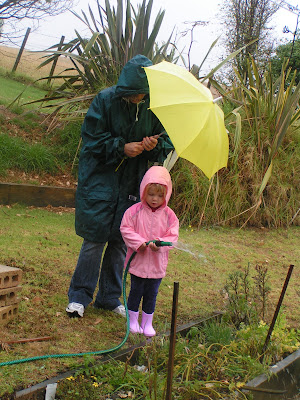 Anyway - I think this about sums our week up and brings you totally up-to-date!

Please pop in and link up, and I'll catch up next week!

kiwimeskreations said…
What a week you have had - and you have obviously had way more rain than us!! Love those photos
Love and blessings
M
17 March 2013 at 17:58

Ange - Tall, Short and Tiny said…
Good luck with the Preschool decision - it's a big one, but you'll find something that fits with your big girl. I went to two; at the first the teacher spent 1.5hrs talking to me about the entire centre, and I came away feeling not quite right about it. At the second, the teacher spoke to me for 20mins, then got down on the floor and played with Jack. That sealed the deal, well-and-truly!
18 March 2013 at 09:04