April 16, 2013
This weekend was meant to be a 'Weekend of Celebration'; but it turned into a 'Weekend of Disappointment' instead.

Disappointments:
- Some are relatively small
- Some aren't
- Some I can talk about
- Some I can't
- Some have very short-term consequences
- Some, I fear, will have far reaching ramifications
- Some can be rectified down the track
- Some will mean 'things won't be the same again'

So lets start with the smaller things - and things I can talk about, and the things that can be sorted out at a later date.

My baby got sick - this meant no party, no dedication; no nothing except sick kids since Thursday last week, and still going strong.

'lil M woke with what we thought was a cold and a low-grade fever on Thursday, was a bit clingy and grizzly - but nothing I figured a couple of days and some good sleeps couldn't fix. The party could go on...

I had a list of things I was to do each day that week to be ready (with minimal stress) for the party on Saturday. I was already behind on this as I hadn't been well that week myself, and had required a Doctors visit and blood tests done; so the stress was starting to pick up a bit by Thursday.

My parents arrived late that morning, and we also had an extra guest for dinner that night. While I did manage a whole afternoon in the kitchen - it wasn't on party stuff, it was on preparing for the following week (I was due to follow my parents back down south for a week, so was trying to fill the freezer with food for hubby).

By the time my friend arrived for dinner, I had made the decision (due to 'lil M's deteriorating health, and my ever-increasing 'To Do' List) that I would not be doing any baking other than the cakes... this was a HUGE decision for me, as I had been determined to self-cater this party and had been planning it for ages. But this meant I was able to spend the evening with her (which was lovely), and do the shopping the next morning, rather than that evening.

The next morning, it became apparent this was no ordinary cold - and with a little body covered in spots, I gave in and rang the Doctor for an appointment ASAP. Thankfully they got us in within 45 minutes, and so the first of the bigger disappointments began - poor wee lad has 'Hand, Foot and Mouth Disease', but not just any; it turns out it was the Atypical Strain which was doing the rounds, and this is the one that is making the kids sicker than normal (fevers, vomiting, diarrhea, blister-like spots on the hands and feet, plus a red rash over the rest of the body, and a REALLY bad throat). My poor boy, while handling it like a pro - was in quite a bad way... We were asked to come back for a follow-up on Monday as they weren't happy with his throat; and were warned to keep a close eye on him and take him down to the local AnE should he appear to get any worse. The silver lining in all this - it appears to have no effect on adults at all, which is a huge relief considering my Dad has a compromised immune system due to his own deteriorating health.

So while 'lil M slept the afternoon away, I spent the afternoon on the phone cancelling the party and dedication and trying not to sound to upset about it all (which in some instances was a complete fail)! 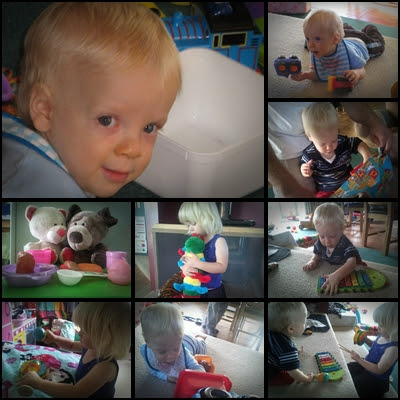 So this is how his birthday and party and dedication ended up being... 'stay at home' days, as he is contagious. We were blessed enough with a few friends popping in briefly and dropping presents off for the kids, so they had something to open. We were also blessed that hubby's Aunt and Uncle still travelled from out of town, to spend a few hours with us and the kids on the day. The biggest blessing though, was my parents - they stayed with us from Thursday through to Monday as originally planned, and took a lot of the pressure off; as Button came down with it on Sunday as well. Thankfully both Button and 'lil M have a solid relationship with my Mum, which meant she was a good substitute (especially for Button) when my arms were full.

I had pre-planned this post even - with wonderful photos of the party and dedication in mind; with sweet words from family and friends ringing in my ears about our children; with accolades about my baking... all things I wanted to share with you. I was going to write it up while down south, where I had hoped to have finally had the time to breathe again. Instead I sit here, with my first free evening in nearly a week - still trying to understand why some of the disappointments hurt so bad. Wondering how much to say... wondering if I could even put in words how I am feeling, if I did have the freedom. Seriously questioning whether I should just make this blog private - so I can write freely on different topics; thus unburdening myself, while not burdening others.

So - of course we can have another party, as many well-meaning folks assured us 'He is so little he doesn't care, and won't know the difference'. You know what - I KNOW this; and I am sure that in years to come we'll look back on this and see it as just the blip it is; but right now it still hurts. My baby boy didn't get his party, he didn't even get a cake - nothing, NOTHING was done to celebrate his birthday, except keep his pain relief up so he was comfortable. We can also reschedule his dedication - and I'll need to rewrite the little message I had for him, but not a big deal. Rescheduling could cause some issues - it took four attempts before we finally got a date that all the family could make it; but I am sure it can be done at some stage this year.

So - these are the little things really... things that can be rescheduled and then later remembered with a smile, especially at the stress it all caused. Yep - these are NOT the things keeping me awake at night (just in case you were wondering), but they are still issues that are going to require further organisation, further planning and further decisions regarding scheduling (do we try and arrange it so everyone can attend again? Do we invite everyone on the guest list again? Do we make it smaller - just family and a few close friends? Do I try and do the catering again myself? Urghhh, lots of questions and planning, but not things that are worth losing sleep over).

So while I am still processing a bitterly disappointing weekend, I am reading amazing reports about the Blogger Conference on loads of other blogs... wishing I had been there, wishing I had such a positive post to share.

Ange - Tall, Short and Tiny said…
Oh, I'm so sorry that your babies are poorly, and that the weekend didn't go as planned. I wish you'd been in Chch too, but there's talk of it being in Akl next year :) Sending loads of hugs and thoughts your way xx
17 April 2013 at 08:39