I had hoped to have popped in before now and written up a couple more posts... but time has been against me once again! Never mind, we'll get there eventually - maybe :-)!

Well - only a weeks worth of photos and fun to share with you all this week, so we're back on track again; yay!

I have been very blessed to have had my Mum staying with me this past week - I had hoped that a few focused days at Preschool with me, would see Button start settling! So I called Mum in, and asked her to babysit 'lil M; while I handled the Preschool situation... 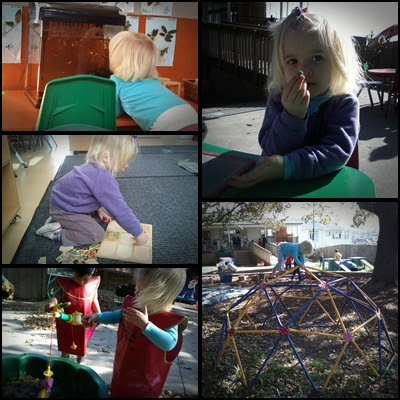 The first couple of days went well - I was able to go and 'have a coffee' while she kept on playing; although both days ended with her calling for me, quite upset that I had taken so long! The second day she let me go off a second time though, so we felt this was really good progress. But Day 3 (which was Thursday, and the fourth day in a row out for her) was a complete disaster... so the staff felt we needed to change plans a little bit, and over the next few weeks 'lil M and I will be coming in with her for a while, until she starts to settle better. They will also be setting up a Star Chart for her - rewards for not crying (she is LOUD and gets quite angry; I think she shocked them all from the comments I heard *grin*). We will be reinforcing this at home with a star chart of our own... here is hoping she responds quickly and easily to these!

But she also amazes me in so many ways - we had a Doctors appointment, followed by a blood test for her on Wednesday (not related though *grin*)! We had her checked for celiac disease, as hubby is intolerant and she is showing some of the same symptoms; and she was SO good that the ladies commented how much better she was compared to a lot of the adults who came in... was so, so, so proud of her! She also started pointing out letters and 'reading' out words to me (as a way of distraction) while waiting for the blood test to start, considering she is only JUST three - they were amazed! I am A.M.A.Z.E.D at her, everyday she is progressing more and more with letter recognition and reading; I wouldn't be surprised if she is reading simple books by the time she is four - or quite possibly, even by Christmas (which will be 3.5)! She is soaking it in, and LOVES it... whenever you read to her now, she points out words and then proceeds to read out the letters in the correct order (95% of the time), and gets it right 95% of the time. Totally in awe of my little girl... 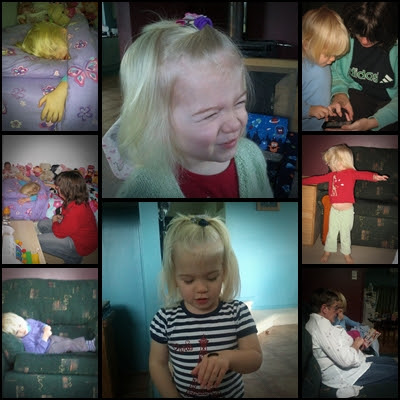 So, other than Preschool:

Left:
1) Asleep after a big morning at Preschool.
2) Being woken up after that same sleep (too long and she just won't sleep at night)!
3) Starting the day slowly on Tuesday...

Centre:
1) Cute wee face, ready to head off to the Doctors.
2) First caterpillar she has had crawling across her hands.

Right:
1) Playing on Mummy's phone with her.
2) Dancing!
3) Snuggles and stories with Mama.

One of the best things about having Mum staying - is there is another camera around, and she captures me with the kids once in a while as well; otherwise you just never see me in photos unless I specifically ask for one to be taken!

'lil M was also amazing this past week - it is the very first time he has ever been babysat, and while he knows my Mum; he doesn't have the same bond with her yet that Button does... so I was a little apprehensive about the whole thing! What a little hero - he was awesome, and I don't think he even missed me :-)! Took it all in his stride, and even when I was home - would happily throw himself between us for cuddles and attention, not really minding who he was with! 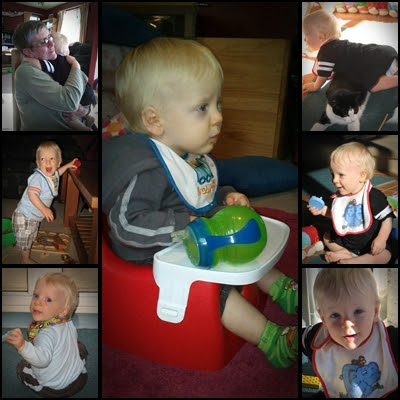 Other than the top left photo where he is cuddling his Mama (Grandma), and top right where he is crawling over the cat - the rest of pretty self-explanatory... just plain cute and happy! That's my boy - sweet, happy and laid-back to the extreme! In the big centre one, it turned out he had a fever - I should have guessed he wasn't well, even looking at it now I can see it; but at that stage I hadn't realised! 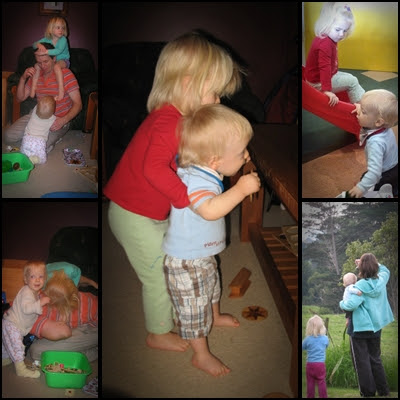 Here are a few of the kids playing together... the two left photos does a Mummy's heart glad; rough-housing with their Daddy, I love moments like this and am stoked I caught it on camera! Centre photo are the kids dancing together (although I don't know just how willing 'lil M was *grin*)! Top right was taken down at the shops and bottom right is me trying to take more photos of sunsets, with a little cling-on and a follower... another photo taken by Mum! 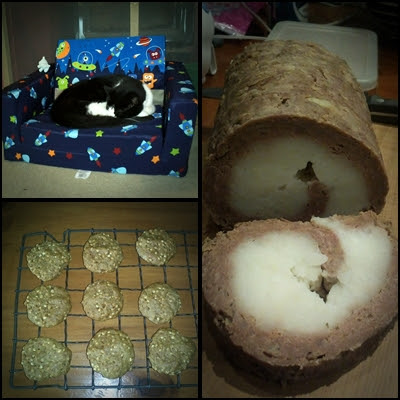 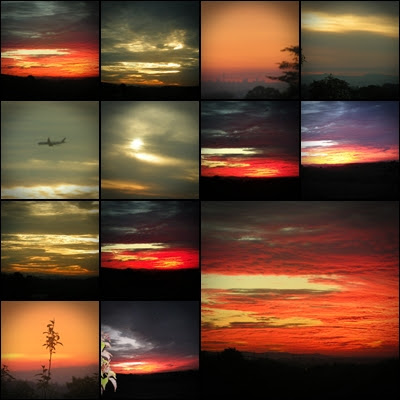 Some photos appear courtesy of my Mum this week!

Thanks again for taking the time to pop in, and hopefully link up!

Catch up next week... and hopefully I'll find time for some other posts this week, I have a few idea's but just have not had the time!

kiwimeskreations said…
It was a great week, although I was exhausted by the time I got home after all the activity :-).
Love and blessings
M
19 May 2013 at 22:28