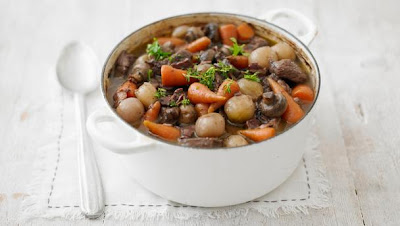 Image can be found here

Stew - there is nothing quite like it on a cold winters night; tucking into a big bowl... warms you up both in and out, and fills you right up as well! Mmmmm, mouth is watering just at the thought of it!

You'd think that making a stew would be the easiest thing EVER, wouldn't you?!? Chuck in some meat, a few veggies and herbs and leave it for hours to simmer away - and, there you have it... a wonderfully filling meal come dinner time, that has left the house smelling amazing as well!

Not so easy in my life though... gah, a stew is one thing I just can't seem to muster - taking into account it has to be gluten-free AND dairy-free in my house! Don't get me wrong - I CAN do a normal stew, but with these restrictions, I just can't seem to get it right! I have managed to work the whole allergy thing into most cooking, and come up with workable and eatable recipes we all (mostly) love! But the humble stew just isn't coming together for me... I made one on Thursday night, but then ruined it by blending it up - thinking the kids would eat it better, the little one only has 7 teeth and is just getting over the thick mush stage (NOT puree - thick mush) and want 'real' food, and our Preschooler is fussy with her meat; so I thought this would work well.

NO-ONE ate it... I would repeat that, but it's simply not worth repeating. It looks like vomit, and is still sitting in our fridge waiting for me to be inspired and turn it into something else. I think it'll just get chucked though - gutted, as it was a HUGE batch, in order to freeze lunch size portions for hubby to take to work!

So I need HELP - can you please send me through your best stew recipes and ideas (and while you're at it, your soup ones also - it's winter, and I want soup)! I need some serious help here, so any idea's how to make great stew (without gluten and dairy) would be greatly appreciated, not just by me - but also by my hubby! He LOVES stew also and was almost gagging on Thursday night when he saw the 'vomit' I produced for dinner (in the end the kids had spaghetti, and we had sausages and eggs - yep, it was that bad)! Epic fail, worst one for a LONG time, and you all know I have had my fair share of fails with food!

Thanks in advance, I totally appreciate it!

Widge said…
The one I make is gluten and diary free not even in purpose I think! (I could be wrong)
I've found Blade steak to be the best meat (tried other cuts and failed!)
Veges basic - carrot onion celery mushrooms cauliflower broocoli etc
Using a good quality cast iron casserole dish with a lid is the big secret (was handed one down from my nana)
When dicing meat make sure to cut across the grain for tenderness.
Pop everything into dish.
Cover with water till only just the top of ingredients is covered.
Some beef stock powder (exchange for gluten free if that's even poss?)
A good 2-3 tablespoons of Worcester sauce
And place in a very low oven (100 deg max) got about 3 hrs.
When the meat is melt in your mouth tender I thicken with a paste of flour and water but you could sub for cornflour.
1 June 2013 at 12:00

kiwimeskreations said…
Hmmm - use a basic stew as 'Bridge' described and thicken with cornflour - if it is really sloppy, I have used pasta to thicken and not served potatoes. The secret is definitely the long slow cook - either crock pot or casserole. Sorry, can't help with the cast iron dish though.
Cross cut blade steak, beef shin meat, lean gravy beef are all good starters.
Will scan some recipes and send to you.
Love and blessings
M
1 June 2013 at 12:13

Amy said…
Hope you find something that works well for you - I spent years making 'chewy' casserole before realising that I wasn't cooking it long enough! I always 'sear' my meat first in frypan now too - better flavour. Use oil for that, and maize cornflour to thicken. Cheap casserole, beef shin, or other beef cut in chunks.
I use red wine, tinned tomatoes, a bit of worsterchire or soy (you could use a gf one), have never used stock. And I add whatever veges are to hand...but have realised that I used to put too many veges which then meant it didn't taste as good either so I'm now trying to limit myself to say 3 and cook greens to eat as a side dish instead of being lazy and trying to put it all in the crock pot! hehe.
Amy
5 June 2013 at 13:54