* Since writing this things have calmed down significantly... I am not perfect and have my rough days, but very rarely do I get so wound up that I end up screaming. I haven't really given it much thought, but I believe Button is responding well because the house is more peaceful in general now - so with a more peaceful Mummy, comes a more peaceful Button, comes a more peaceful house! Yay! I have also noticed that 'lil M doesn't get wound up when others are crying or upset now, so I am wondering if he was just crying because of the whole atmosphere - not because of 'a stage' as I say further down. Hmmm - grateful to be living in peace once more!!!!! 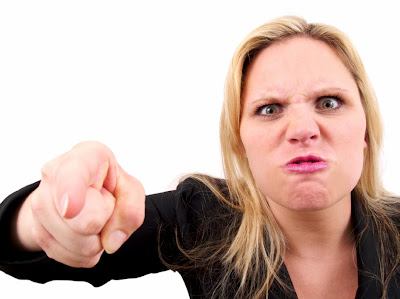 If you click on the link above, it'll actually take you right through to a blog post about anger management; hahaha, how ironic (I was just looking up google images)!

Now I know everyone loses the plot from time to time; but this is far more often than it should be, it is way over the top for the circumstances (generally), and I tend to get down and yell in Button's face (ouch - that is honesty). Poor Button gets the brunt of it, although 'lil M got his share this morning... I can really get out of control at times. BUT I never hit out, I don't swear or say 'nasty' things about/to the kids - however if I feel she is not listening and starting to get out of control herself, I will get down and try to make my point by yelling back.

And I wonder why Button screams and yells a lot, even at her brother... urghhh, and then I hate myself for it.

Hubby and I had a talk about it the other day (end of last week perhaps), and I have apologised to Button and promised I'll try and do better. We have had a good week, right up until this morning... the agreement was, I'll warn her once about her behaviour, but if she continues - I'd just pick her up and pop her into her bedroom; no yelling, no discussion. She responded really well to this, and has been great all week; yesterday wasn't perfect, but I managed to stay in control and she talked about it again last night (so she obviously had felt the tension yesterday as well).

But this morning was crazy - I had both the kids fed and dressed, and myself fed... just needed clothes. So I left the kids playing happily downstairs for 5 minutes, while I raced upstairs (this is a daily thing), threw a load of washing on, made the bed quickly and was just about to start getting changed when I heard Button scream - one of those 'I am in pain' screams. So I flung myself downstairs again, and it turned out 'lil M had poked her in the eye... I cuddled and soothed her, but anyone who knows Button IRL will know she is a drama queen. I managed to work out there was no damage, it had just hurt her (and probably given her a fright), but she just kept going... and going... and going, no matter what I tried.

'lil M is at the age that if anyone else cries, he has to join in and needs comforting as well - gah! We have made a decision just the other day that if he is the cause of the crying (as in this morning), then we gently put him away from us and tell him to stay there, while we deal with the injured party - ignoring him as much as we can, until it is more appropriate to include him in a cuddle. He is starting to get jealous when we cuddle Button, and manipulate with tears to try and take over... it was getting ridiculous, and Button was missing out. 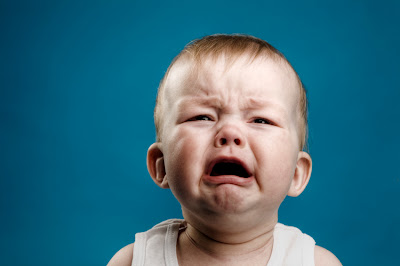 So you can imagine the scenario - two screaming kids, Button on my knee screaming, and 'lil M beside me winding himself up to the point of gagging. I finally managed to get Buttons attention, and make her stop screaming - checked her eye really was okay (she hadn't let me near it before then), cuddle her and then gave 'lil M a quick cuddle... calm, briefly! Button is attached to hankies, it doesn't matter which one, but if she is crying she HAS to have a hanky in her hand. I had given her mine, but it was dirty and she was asking for a clean one - so I got up to find one, and they both started screaming again. 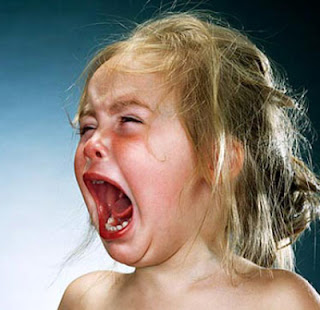 I found a hanky, gave it to Button and then told them both to be quiet - there was no longer anything wrong, but when they wouldn't listen (winding each other up by this stage), I left them at the safety gate and went upstairs to get dressed and try to calm myself down. 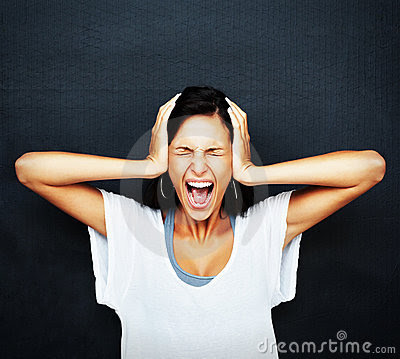 Lets just say it got even uglier; and Button ended up in her room, while 'lil M wouldn't calm down until I got him into the car and we headed for Preschool...

I am a pretty miserable Mummy right now, feeling the guilts and hoping Button is okay... more apologies required this afternoon methinks, and some special one-on-one attention to be given to both little rascals as I can. I suspect 'lil M was so upset because he doesn't usually get yelled at himself, but I was trying to make lunches and clean kitchens before we headed out, and he was refusing to get off my hip; so poor wee man got told off a few times himself.

I hate days like this; I hate feeling this way, I hate behaving this way, and I hate what I have done to my kids... urghhh, time to find other strategies before I leave lasting damage.

PS - Those are not my kids in the pictures (this time)!

And no more judging other 'screamy' parents... oh man, have I been on my high-horse over the years about that; so easy to judge when you don't have kids of your own *gulp*!

kiwimeskreations said…
I hear what you are saying, but you have not failed as a parent!!

Time out is obviously the best strategy, especially for Button. Finding somewhere for Lil'M may be an issue though.

Maybe if you say that you are starting to get really really cross/stressed and if they don't quieten then you will join them screaming that may help??