November 06, 2013
Okay - so I saw somewhere on-line that you can make home-made potato chips in the microwave... yeah, yeah I thought; ever the Miss Sceptical!

Anyway, the other night, after our 'Pizza Dinner Date' I thought why not? So I carefully chopped up one small potato into thin uneven slices and followed the instructions carefully! I figured that the smaller and thinner the pieces, the better chance it had of working.

And you know what - IT WORKED!

Hubby was so impressed (I think he started off even more sceptical than me); that he has vowed we will never buy potato chips from the supermarket again, and he is on the hunt to buy proper trays for 'chippie making', so it isn't quite so labour intensive!

So - here is the proof, and some quick instructions! Photos and second lot of chips made Sunday afternoon, and enjoyed by the whole family! 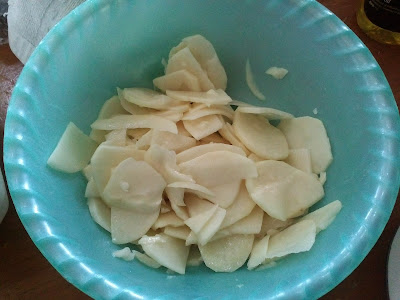 1) Put three medium sized potatoes (or however many you need to feed your hungry family), through the slicer on your food processor - ever so much quicker than slicing them up by hand! We have learnt through trial and error - I was right the first time and the thinner the better!

Cover them in oil (we used olive oil) and whatever seasoning you like - we have just used plain salt at this stage, but have plenty of idea's for future seasoning's!

Learn from our mistakes though - don't have them dripping in oil, just a light covering is fine! 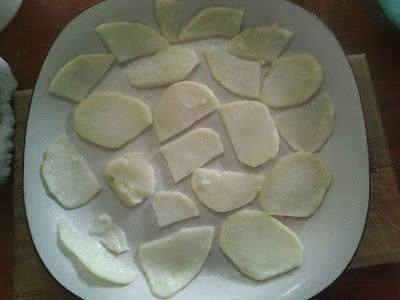 2) Place them on a microwave-safe plate all separated, they tend to stick together if you have them too close... initially I oiled the plate (having read that they stuck to the plate if it wasn't oiled); but it didn't take long to realise that just placing baking paper on the plate first, worked best!

3) Pop them into your mircowave and leave them for two- three minutes on high... this is where you will need to work out what works best for you, but three minutes on high is fine for us (if not drowning in oil *cringe*, then it can take as long as FIVE minutes per side)! 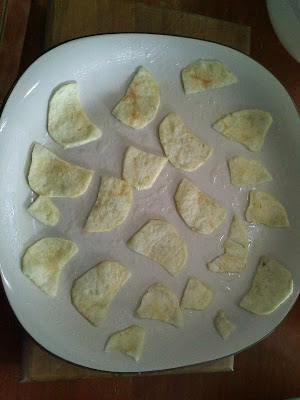 4) Take them out, and turn them over - they'll be hot, be warned! I used a knife, as some did stick more than others!

I had two plates going at once - so while the first lot of chips were being turned over, the second plate was having the first side cooked!

And then I swapped - makes it slightly less labour intensive! 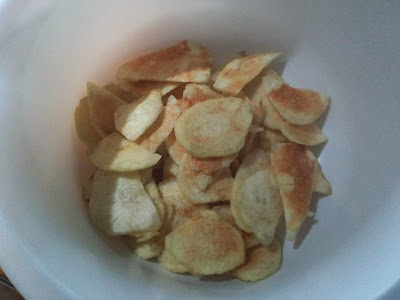 5) Pop them into a plastic container, and then take them outside to enjoy together as a family: 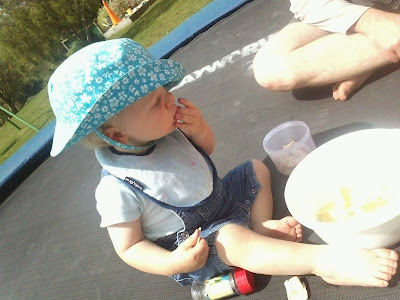 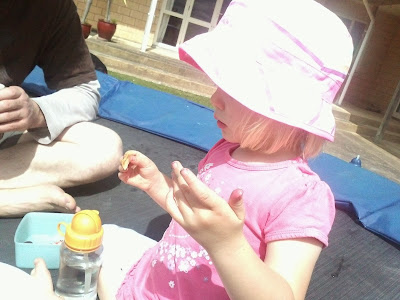 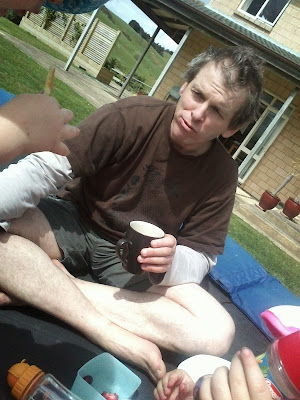 Tested and approved by all!

PS - Be warned they are even crunchier than the supermarket ones... if you have a lose tooth, be careful! 'lil M coped okay, but only wanted a few as it took him so long to chew and swallow them - he is a gulper from way back, if it takes for than three chews, he spits  it *grin*!

Amy said…
We tried these at lunch time today! Great idea, and really simple. Took at least 5mins per side on our heavy plates, but the two potatoes I cut up disappeared very quickly! :o) Thanks for the idea!
8 November 2013 at 20:11