I wasn't planning on doing the Ninja Bake, but it had been niggling me a little bit; I had the confidence and the time this year to actually do this, and it seemed such a cool thing. SO, eventually I made an effort to read up on it, only to discover that the registrations to be a 'Baker' had closed the day before - so I figured 'it wasn't meant to be'!

Next thing I know - there was an e-mail from Sophie thanking me for registering; with enough other details for me to realise that she had the wrong Elizabeth, in the wrong city! But it was a 'God-Incidence', and I just knew it! So I e-mailed her straight back, explained the alter-ego issue, but also let her know I actually was keen... and that is how it got started!

I registered, but it was decided I would pick two families myself - which I had been thinking of doing anyway! So I duly went up to Button's Preschool and asked the lovely Head Teacher to pass on the names and address of a family in need, and also e-mailed our Church Administrator and asked the same of her. I didn't need or want details - just first names and size / age of family, along with physical address.

TOP - For the church family; was told there were teenagers; so they got a chocolate cake and double chocka-mocka biscuits.
BOTTOM - Obviously there were preschool age child(ren), so they got simple sugar biscuits cut out in shapes; half iced in pink and half in blue, and sprinkles courtesy of Button! Along with Chocolate Chippie Biscuits for the Adults... 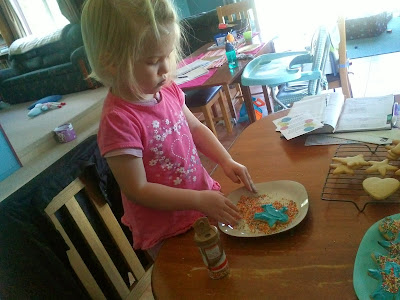 I feel a little embarrassed about the packaging now, when I look at the care some of the other lovely ladies took in their presentation - but I am hoping that the amount of baking I did made up for this a little bit! We're also still resurfacing after the hideous car issues that wiped us completely out and then some; so while hubby was more than happy for me to be involved - we just don't have the ability to get what is deemed as unnecessary extras!

So Sunday afternoon saw me don the Ninja Gear, and had us out driving through town and country to drop off the precious cargo: 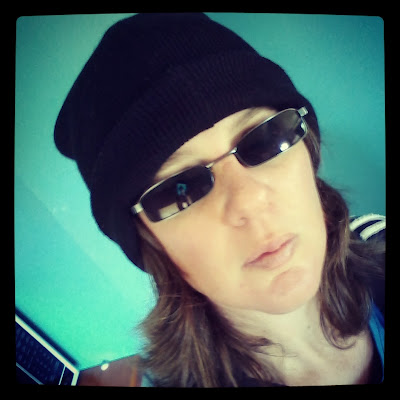 I was so going to do the 'drop and run' technique, but the neighbours caught me at the first house... plus there were three houses sharing one driveway; it was kind of important to make sure I had the right place! So I did knock on the door, and just explained that I was asked to drop the baking off, and the explanation was attached. I did leave a short note under the 'Sisterhood' poem, letting them know I had been asked to bake for them, as 'The Sisterhood' had heard they were going through a tough time... I also included a list of ingredients in case of allergies (living with an allergy family, this is of significant importance to us). I did the same at the second house, only because the sounds I heard emanating out of it didn't match with the family I was expecting - but all was good! Neither family knew me, so as far as they're aware, despite showing my face I was still just an anonymous 'courier'!

I am stoked I got to do it; it felt good, I loved the idea of blessing others in need, and I am hopeful some of this rubbed off on Button... I also got to nominate my parents for some baking; after all the stress of Mum's surgery being changed four times, then followed by infection - I felt they deserved some love! That didn't go to plan either, but they did eventually get their baking; which was much appreciated and enjoyed all the more due to the story behind it (not mine to share): 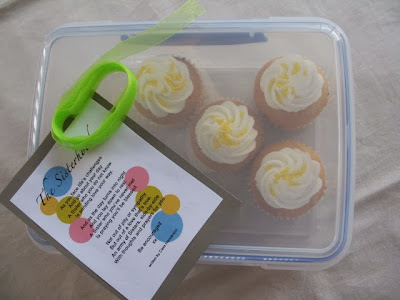 So despite the slow start on my part, and the strange way it all happened... followed by the drama at my parents end, it was a roaring success I hope. My son was a taste-tester for me, as neither hubby nor Button can eat gluten, and judging by the grin on his face - my guess was, it all tasted pretty okay: 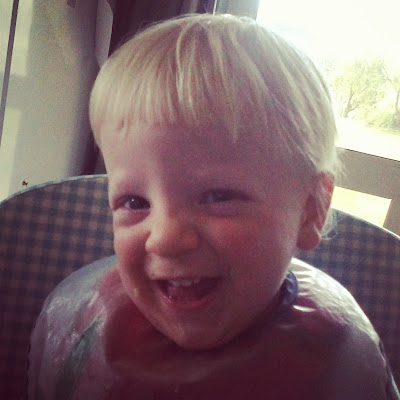 I almost didn't write this post, as it is SO embarrassingly late as well - but I know a couple of others who were hanging out waiting for me to write about it... so I have! My apologies for the tardiness; I have not had much time to blog lately (or do anything really) for a number of reasons relating mainly to children and teeth and sickness. BUT the main reason for this particular one is actually my computer dying - yep, blue screen of death and all! My genius husband fixed it fairly quickly and saved everything (including my THOUSANDS of photos, quite literally); but he rebooted it with the Ubuntu Operating System on it, which I have never used... he then never got around to putting my photos back on it, and then proceeded to tell me I couldn't download any new photos either, as he wants to find a proper back-up system for them all! However, he is taking SO long to sort this out, I have since downloaded my latest photos anyway - these were including the ninja-bake photos; hence the VERY late post!

For more stories and information on The Sisterhood Ninja Bake 2013, go here!

my story ninja bake 2014 the sisterhood

kiwimeskreations said…
What a wonderful 'bake' story. Don't worry about the wrapping, the contents and the love they were prepared with counted the most! And in families quantity also counts ;-).
Love and blessings
M
9 November 2013 at 07:48

Ange - Tall, Short and Tiny said…
Awesome! I love that you found two families who could really appreciate your goodies. Don't feel bad about your packaging - it's about what's inside, and the thought behind it, that is important xx
10 November 2013 at 08:13