Currently I have like 50-thousand (okay, so slight exaggeration there) posts floating through my head; think I'd better write some of these down so I don't forget them! I know my sis-in-law starts writing them in Word first, so she doesn't forget them; and as she completes each article, she posts it (at least she used to)! I tried this once, wrote out the first line of a few different posts - but ended up deleting them all, as I couldn't remember, even slightly, what the posts were meant to be about! Really didn't work for me... I think I need a small notebook, and dedicate a page per article idea, and jot down notes to include as I think / remember things.

But I am digressing, again!

I have finally downloaded all my photos from this Christmas / Holiday, and have sorted them into appropriate months / days (well, my new photo editing programme has anyway)! So I thought I'd start off fairly simply, and just share these with you... but talking of programmes and photos and software etc; I need to ask you a question! When my computer died a few months back, hubby changed the set up from Windows to Ubuntu, it has taken me a while to really get my head around it (and truth be known, I am still somewhat lost), but this has meant I have not got all my old software / programmes back, and I can't remember the name of the photo software programme I was using - it made beautiful collages, and could do things I probably never even knew about... but I am having a moment and simply can't remember it! Gah! SO - what is your favourite photo software programme for tidying things up, and adding collages to your blog? Only thing is, it needs to be FREE!  Ubuntu comes with Gimp, which is apparently on the same level as Photoshop, but that is eons ahead of me; and I haven't even had the courage to open Gimp up yet! Until then, you'll need to just appreciate the photos, one still at a time!!!! 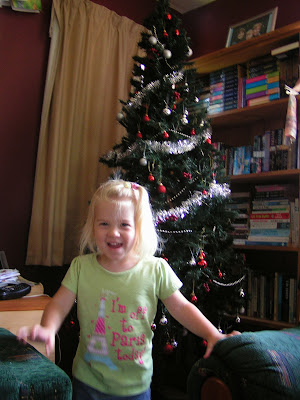 The Christmas Tree in all it's red and silver glory, with a very happy three year old who got to help! We only took it down today, taking into account we only got back from holiday two days ago, and every year I wonder WHY?!? Taking it down and packing it up seems to take SO much more time... but then I see photos like this, and I remember why we go to so much effort!

We did Christmas with my parents this year, which meant travelling - so we headed down on December 23rd, and on the 26th we left them for a family holiday in Tauranga; coming back home on January 2nd.

It was a long ten days away; both 'lil M and hubby were still struggling with colds, 'lil M didn't settle quickly - up at night almost every single night we were away (New Years Eve he was up ELEVEN times, yep - we saw the new year in, but not in the way we would have liked)! Button, who normally settles well, and had been great at Mum and Dad's, wouldn't go to sleep in Tauranga - tantrums that first night until well after 9pm! After 2-3 nights of this, we realised that we'd been shutting the lounge door there, so she hadn't been able to hear us - at home she can hear everything, as her room is right next to the living area. Once we had that sussed, she went down like an angel! So over-all it was not a holiday to remember, but we had some bright moments during it; which were well documented with photos! I will now refocus back on Christmas, and might try doing a quick holiday post once I have got the collages sorted... 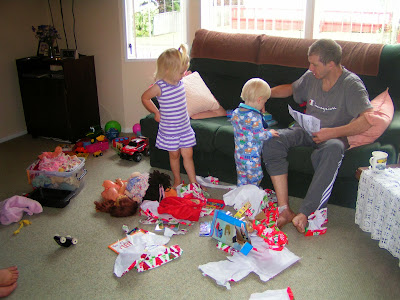 Christmas morning saw 'lil M (and thus us) up at 6am, while Button slept on until 7am... the kids got up to their main BIG present (scooter for Button and a tricycle for 'lil M; photos to come). We then had a cooked breakfast made with love by moi (toast, bacon, eggs and mushrooms), followed by the opening of the Santa Sacks - mayhem recorded above!

After this we went to church, where we met up with hubby's parents as well (in case you haven't heard the story - both sets of grandparents live in the same small town; which is, incidentally, where we also met and got married... they attend the same church, and had known each other for years before we ever met)! After church Mum and I got on with the finishing touches to the Christmas Dinner, and hubby's parents joined us to celebrate together. The kids were meant to wait until after lunch before they got to open the rest of their presents (the pile was enormous), but dinner took so long and they had been so patient, and Button asked ever so nicely AGAIN, that us adults gave in and let them open their presents between dinner and dessert!

And I'll let the photos tell the rest of the story: 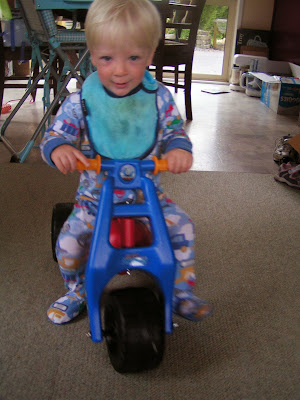 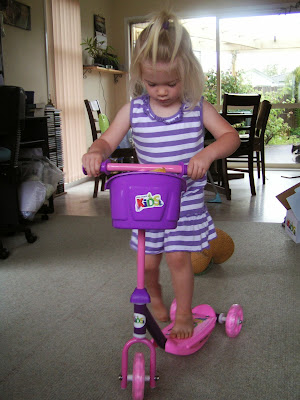 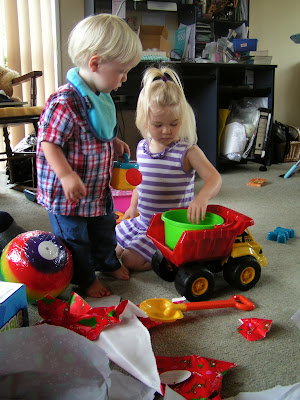 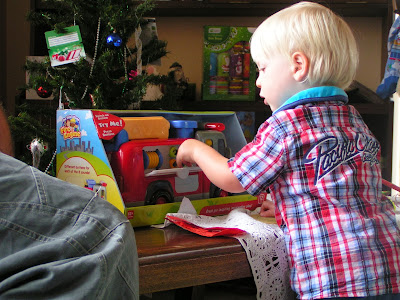 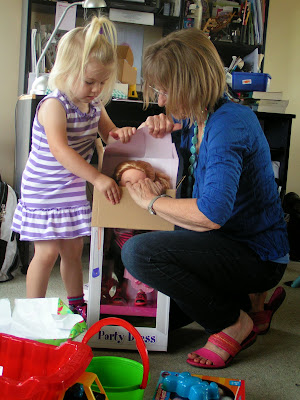 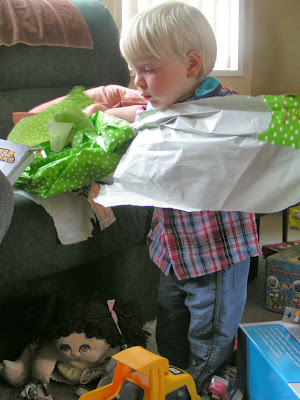 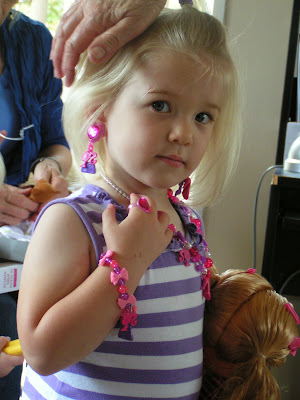 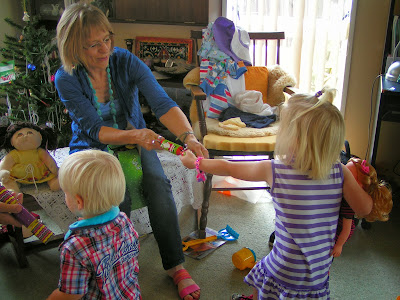 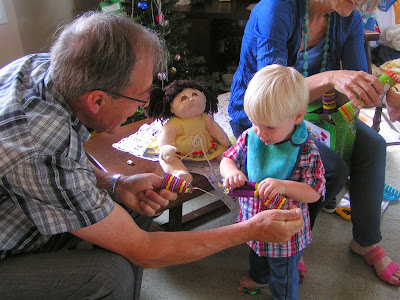 Hope yours was a happy and festive time as well!

Anonymous said…
Gorgeous pics Elizabeth! Love the one of Button dressed up in her pink finery…she is VERY serious about dressing up! Hehehe. Looks like you had a fab Christmas surrounded by family - the best kind!

I use Picasa for photo editing/collages, is that what you're trying to think of?

kiwimeskreations said…
Photoscape is the programme you are wanting - and I have discovered lots of things about it recently... and that is barely scratching the surface!!
Love the photos
Blessings and love
M